Wood and concrete are two materials that could hardly be more different. Each has its own qualities, advantages and disadvantages in comparison with the other, and so it is mostly a question of principle whether to build with one or the other. But now there are combinations of these two materials which are enjoying great popularity. But a composite of the two - as wood-concrete - is much rarer. So far, it has been mainly used for non-load-bearing components, such as in interior design or the design of a facade. Scientists from the National Research Program Resource Wood in Switzerland have now further developed a composite material for load-bearing walls and ceilings. 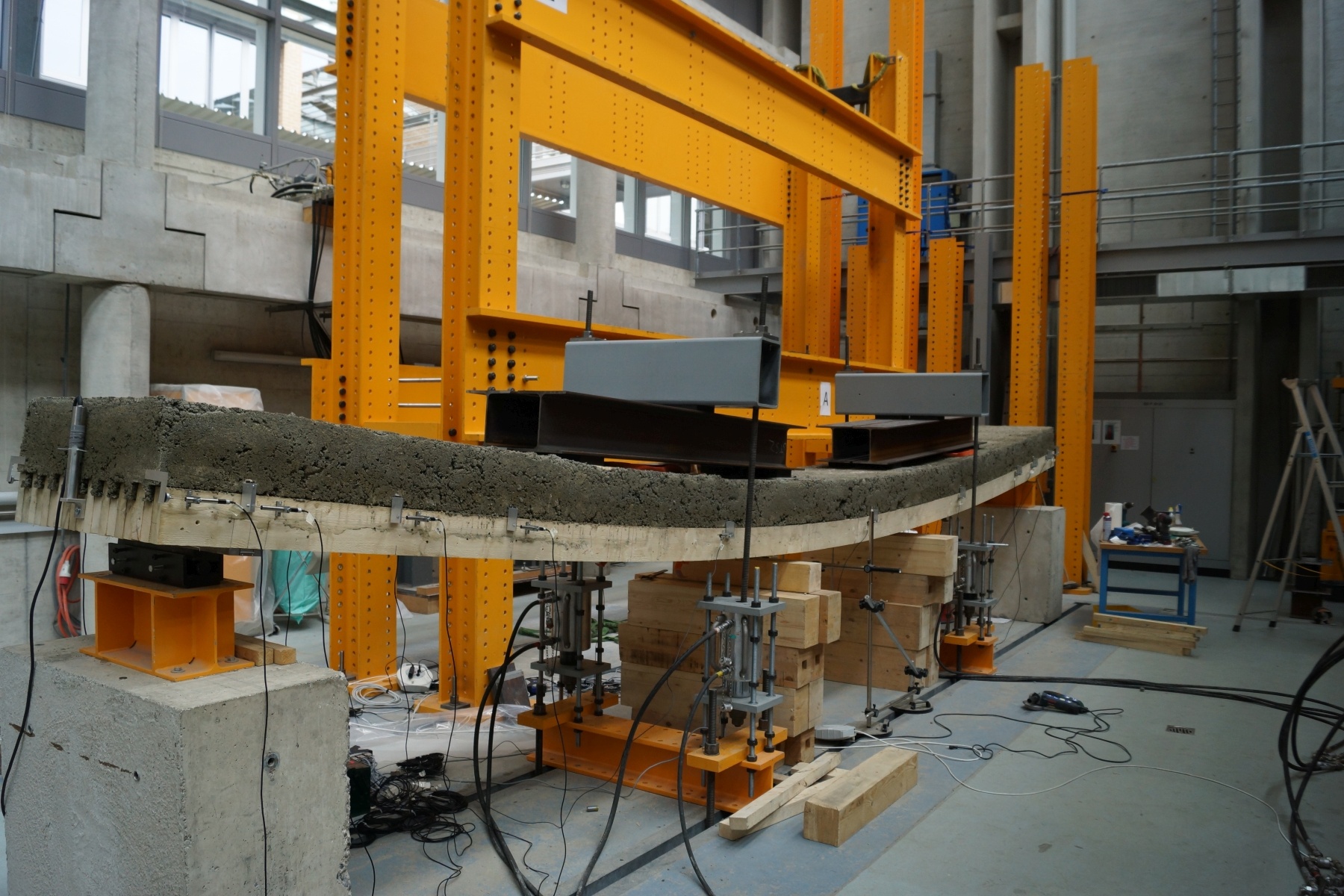 Composite materials from wood and cement are nothing new. In the 1930s, the Dutchman Richard Handl patented a "method for the production of a lightweight building material made of wood waste and cement". In the Second World War, in wood-concrete was used in Germany in residential building construction. To make up for the war-related scarcity of cement, substitutes such as brown coal slag was used but with limited success due to bad moisture protection. In the GDR, on the other hand, good thermal and sound insulation was achieved through non-load-bearing plates made from a better wood-concrete mixture.

The interest in wood-concrete was revived by the general increase in the awareness of sustainability in recent years. Since the beginning of the millennium, the Technical University of Munich has been researching wooden lightweight concrete. The focus is on the potential in fire protection and the visual design of facades and interior design. At the Bauhaus University in Weimar, the green:house, an experimental wood-concrete building, was built between 2009 and 2010 which combined the positive structural and physical properties of wood (such as diffusion capability) and those of concrete (such as sound insulation) and which was, at the same time, able to be pre-fabricated and processed in a frame construction like wood. The composite material consisted exclusively of wood chips and cement.

The first complete wood-concrete house using lightweight construction methods has already been built. But now scientists have developed load-bearing wood-concrete as part of the National Research Program (NRP 66) "Resource Wood" in Switzerland, which would even be suitable as a substitute for normal concrete in concrete construction. Fine polished wood replaces the usual gravel and sand. The researchers have experimented with different compositions of different weights which all weigh at the very most half as much as normal concrete. In the lightest blend, the volume of the wood is over 50 percent and the weight of the wood-concrete is so low that it even floats on water.

In addition to its low weight, the new wood-concrete is characterized by increased fire protection and better heat insulation compared to ordinary concrete. In addition, the portion of wooden, of course, also has a positive effect in terms of ecology. Last but not least, timber with sand and gravel has the great advantage of being renewable. And, above all, energy can still be obtained from wood-concrete after being burned in a waste incineration plant.

This very interesting compound wood-concrete material, which combines the advantages of two very different materials in an ecologically friendly way, could replace conventional concrete in many cases in the long term. But it will probably still take a while before the newly discovered old building material actually “comes to bear” in the construction industry. At the moment, the researchers of the NRP 66 project are still investigating the question of what mix is best for what purpose.

Previous post: A charging tower: Architecture for electric cars
Next post: These 3 German corporate headquarters have set world records for being green