In March, the European headquarters of Bloomberg in London achieved 98.5 points at the international certification, BREEAM. In doing so, it demoted The Edge in Amsterdam to 2nd place as the most sustainable office building in the world. But corporate headquarters in Germany are also setting records for green architecture and technology. We present the three "champions". 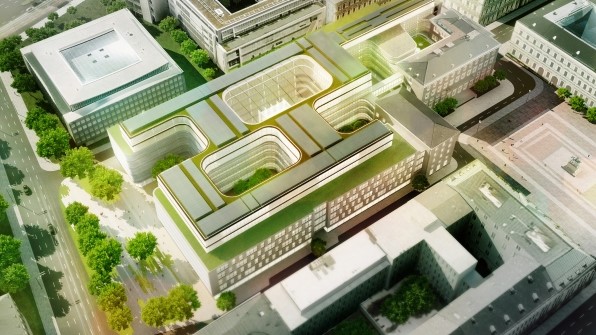 When an international engineering and technology leader such as Siemens started planning a new headquarters, it naturally created high expectations - which the green 'high potential' ended up meeting. It is one of the most sustainable office buildings in the world and has won awards from both the DGNB and the LEED standard in platinum. The proud record is 90 per cent less electricity, 75 per cent less water, 90 per cent fewer emissions than the old building. Its primary energy requirement is 52 percent below that currently required by the German Energy Saving Ordinance.

The basis of this success was the close cooperation between Henning Larsen Architects and KBP engineers which started with the planning. The intelligent use of groundwater heat is implemented using 70 kilometers of water pipes installed in the floor slab. Lighting, building security, dynamic glass slats on the western facade and the photovoltaic system on the roof are all continuously monitored by about 30,000 sensors and controlled via a central building and energy management platform. Heating, cooling, ventilation and sun protection can be constantly optimized. In meeting rooms, even the breath of the occupants is analyzed by CO2sensors and the supply of fresh air is adjusted accordingly.

A new record was also set by the Berlin 50Hertz network headquarters which was designed by the Love Architecture and Urbanism office in Graz. It was awarded the title of the first building worldwide with a DGNB diamond for maximum energy efficiency in conjunction with "outstanding design and architectural qualities". The facade, with its eye-catching zigzag geometry from white steel composite columns (Dia-Grid), creates associations with the business of the network operator and the bridges and viaducts of the neighboring railway area. 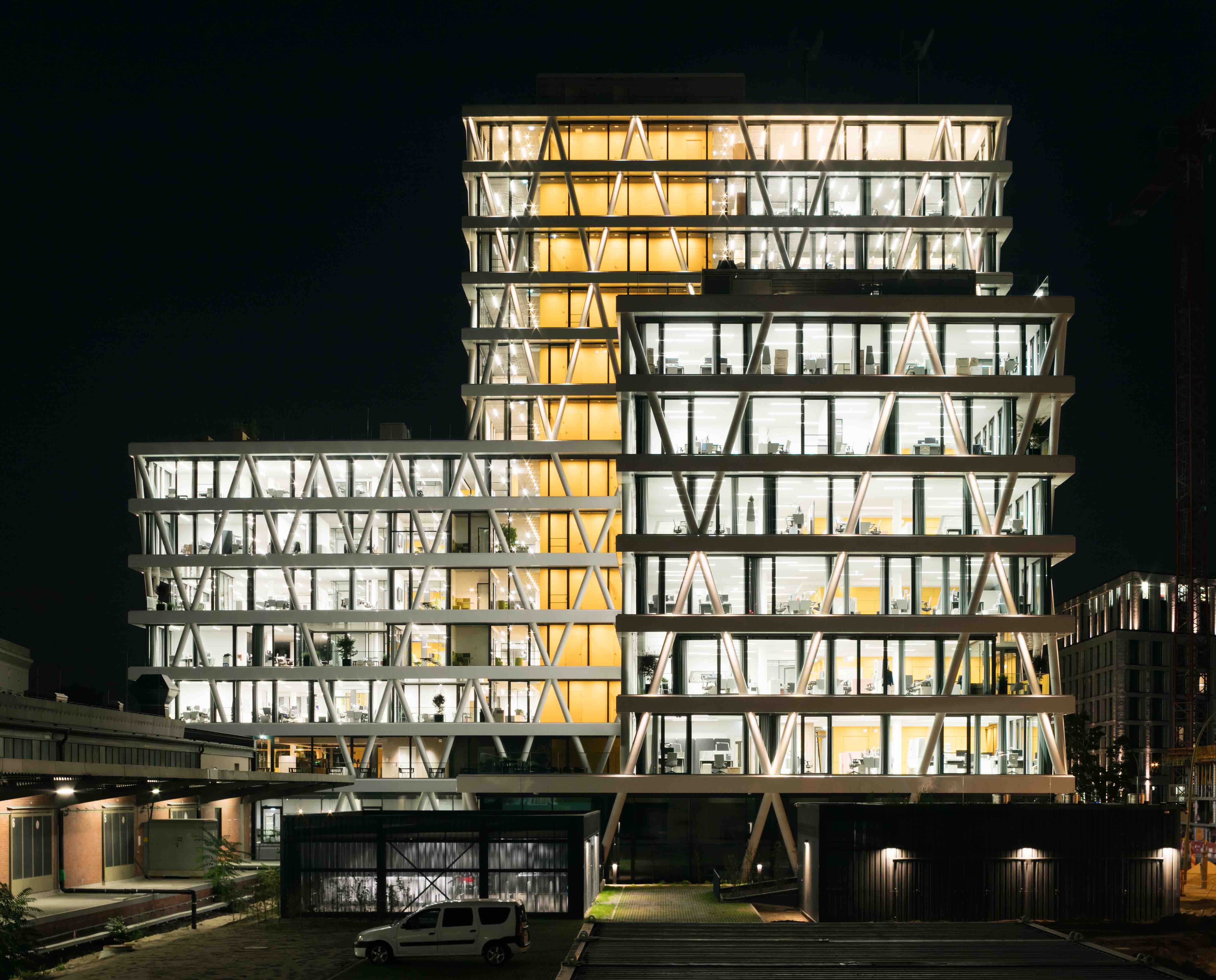 The striking corporate architecture is even more impressively spotlighted at night. The three orange development cores, in which building services and sanitary facilities are housed, jointly form a sine curve of luminous LED highlights on the facade. The external network-like structure, by the way, is not only visually appealing, but also a masterpiece of static engineering. It made column-free office floors possible and exceptionally large open spaces and flexibility, which extends to outdoor workplaces.

The new headquarters of Beiersdorf, which is currently being planned by Hadi Teherani Architekten in Hamburg, is also intended to be a pacemaker for sustainable architecture: The group headquarters is intended to be the first office building in Germany and third building throughout Europe to be certified in accordance both with LEED and the new WELL building standard. The latter was developed in 2014 by scientists, doctors and architects and is the first certification standard for buildings which concentrates on the health and well-being of the user. 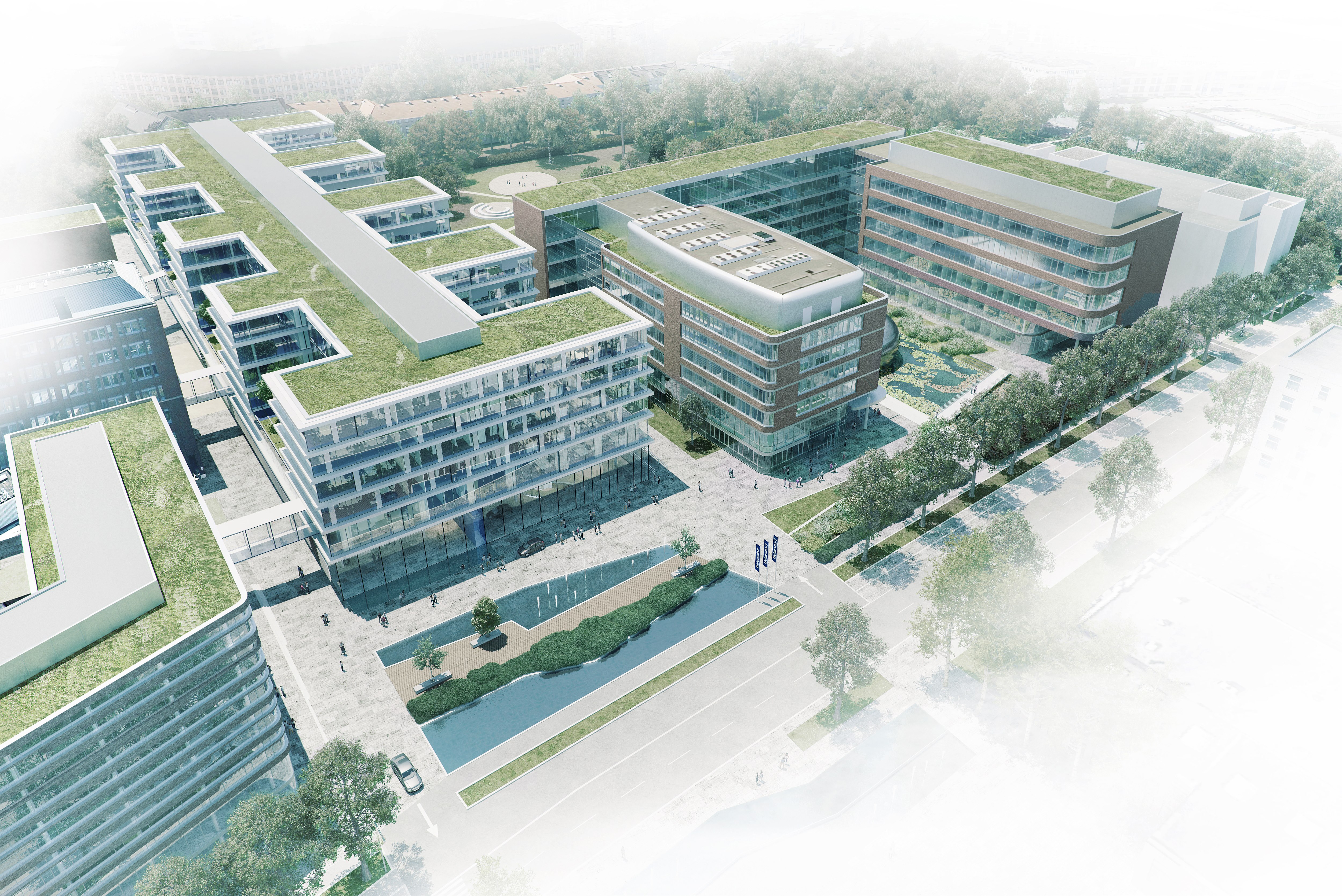 From the outside, the new headquarters appears inconspicuous in a typical Hanseatic manner, apart from its huge leafy flat roofs. But the interior is planned to be all the more exciting. Beiersdorf chief Heidenreich claims that the workplace concept is inspired by the headquarters of Google and Apple which he is planning to visit in Silicon Valley. "We have been moving to increasingly open working worlds for many years. There won't be as many walls," said project manager, Best. In addition, there is not only a high-end gym planned for the staff but also a cafeteria with “food islands" and healthy specialties from all over the world.

If you want to learn more about working worlds which focus strongly on the well-being of their employees, like Google and others, you can learn more here: innovative office concepts.

Previous post: An old material rediscovered: Wood-concrete
Next post: Plastic as a replacement for cement: Stronger eco-cement in the future?