Structural engineering in the middle of the desert: The Port of Duqm

The Port of Duqm in Oman is currently developing into a major trans-shipment center in the Middle East. The first shipping companies from Europe are shipping their goods through this port and Asian countries like India are also very interested in economic cooperation. It's worth taking a look back at the construction of two dry docks, which were built between 2009 and 2011. The architects completely modeled this engineering in 3D, which was tremendously advantageous for the complicated formwork and reinforcements. Learn in this post how the planners from South Korea successfully coped with the multifaceted difficulties. 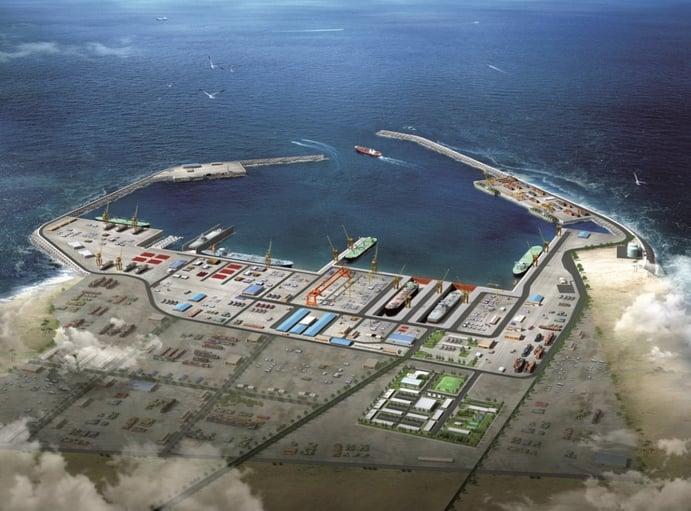 The building was to occur quickly, as demanded by the Oman government. Within three years of construction time, a 100-hectare large site was to be created in a desert-like environment: with various shipyard and crane facilities, deep-water berths, storage areas, accommodation, office buildings, a three-kilometer-long quay wall and an upstream jetty - a so-called breakwater.

See from the customer's point of view how Allplan Engineering was used in different challenging customer projects and contributed tremendously to their success.

But that wasn't all. The main attention was placed on the construction of two dry docks, that each with a length of 410 meters offer space for supertankers with a weight of up to 350,000 tons. Unforeseen problems during construction had to be avoided at all costs. In addition, only three months of time were available for the planning phase – from early November 2008 to the end of January 2009.

The South Korean construction group Daewoo Engineering & Construction acted as the general contractor for this industrial construction. Daewoo Shipbuilding & Marine Engineering took care of the planning of all systems and the service provider BasisSoft provided support in the field of software. Given the challenges mentioned, the cooperation partners decided to use the working method BIM in combination with Allplan Engineering. They combined an integrated working manner with a virtual supporting structure model.

This 3D model combined the sub-models of the individual specialist planners, including the formwork and reinforcement plans. Any changes to the systems could be incorporated directly by the architects and engineers. In this way, all plans, views, sections and lists could be managed centrally. Thanks to BIM, they were always accessible and up-to-date.

The biggest advantage: A 3D-modeling of the reinforcement plan

With this tight schedule, the planners considered the 3D visualization of any component to be a decisive advantage. The pump station, for example, contained highly-customized structures due to the flow openings, which made the reinforcement difficult to design. The formwork edges of the construction, however, could automatically be adopted from the central model. If the planning had occurred solely in 2D, it would have taken much more time to determine the position and dimensions of the steel bars.

The planners used 3D PDF files to check the entire structure for possible collisions. Changes could also be easily integrated at this point, since the construction had not yet begun. The associated layouts and schedules, such as steel and bending schedules, or the volume of ready-mixed concrete automatically updated in the central model. Thanks to the three-dimensional representation, all project participants were also able to understand the individual structures down to the smallest detail.

BIM was not only advantageous during the planning phase, but also in the realization phase. In addition to the usual layouts, 2D PDF files also included isometric representations or exploded drawings. This simplified the communication of the employees during construction. They came from different countries and thus were able to understand the structure, even without adequate language skills.

The project partners adhered to the tight time frame by using this procedure. In addition, they were able to ensure an extremely high level of planning quality and allow for a flawless construction of the Port of Duqm. In addition, there are many other structures that were planned with Building Information Modeling. To find out what they are, read our article "10 innovative BIM projects that you should know about."