Usually architects and engineers use "dead" materials for their buildings, such as steel, concrete or glass. These materials are used to create static structures. Construction botany, on the other hand, takes a different approach: It combines living and non-living construction elements. Over time, the ever-stronger plants take over the loads of the system. This idea is by no means new. In this article, you will learn the history and vision is behind construction botany and which specific application examples already exist.

A research area with a long history

Modern construction botany has existed in Germany since 2007 as an interdisciplinary area of research at the University of Stuttgart, more specifically at the Institut Grundlagen moderner Architektur und Entwerfen (IGMA -Institute of Basics of Modern Architecture and Design). Architects, engineers, humanities scientists and natural scientists develop joint projects here that use plants as basic components of structures.

Over the past few centuries, there have been numerous examples of people using living plants as structural parts. A tribe in the Indian rainforest, for example, still uses the aerial roots of rubber trees. Thanks to a special technique, a net-like bridge structure has been created from these roots over the years that spans rivers or valleys. In Europe, the dance lindens are such an example: Wooden platforms in the treetop that are still used today for folk festivals, such as in Limmersdorf in Upper Franconia.

Vision of an urban design

The desire for a "livening of architecture" has thus existed for a long time. One of the leading scientists of construction botany, professor Ferdinand Ludwig, uses this approach to pursue the vision of being able to one day live in treetops at 25 meters height. Increasing urbanization is making housing in metropolitan areas scarce. That is why this discipline is also based on a modern vision of urban planning. Its proponents ask themselves the question of how large areas of green lungs can be created in the smallest space.

Procedural approach to architecture and nature

Construction botany projects pose different challenges during planning than other traditional buildings. Building and occupancy must be understood as a process. The latter depends on the growth stages of the selected plants, which are mostly trees. In addition, the combination of structural analysis needs on the one hand and the aesthetic opportunities of plants on the other plays a major role. The structural ideas are based on the laws of plant growth. That is why there is a configuration at the beginning that gradually evolves.

The construction and occupancy process for these structures can be broken down as follows:

The trees, for example willows or sycamore trees, also require horticultural care for a lifetime. They must be watered and pruned regularly, especially in the first two years after planting.

Advantages and disadvantages of vertical gardens

As with other forms of sustainable construction, such as with planted facades, the plants contribute to air purification. In addition, the leaves provide shade on hot days. Experts refer to construction botanic structures as an "autobiographical form finding," because the development cannot be fully anticipated. External factors, such as pest infestations, soil, climate and environment, affect the structure over the years.

The plants repair minor damage to their structure on their own, although scientists have found that trees no longer become strong once they have a supporting structure. In order to bypass this principle, the scientists artificially bent the young plants every day in order to achieve greater stability in the tests.

Structures in construction botany: a selection

In recent years, some interesting structures have been created throughout Germany, especially at the initiation of the IGMA. Two of the first projects were a footbridge as well as a tower made of willow branches in the park "Neue Kunst am Ried" in Baden-Württemberg. In 2012, employees from the institute designed the Pavillon Nagold, a sycamore tree cube, which was constructed as part of the state horticultural show at the time. 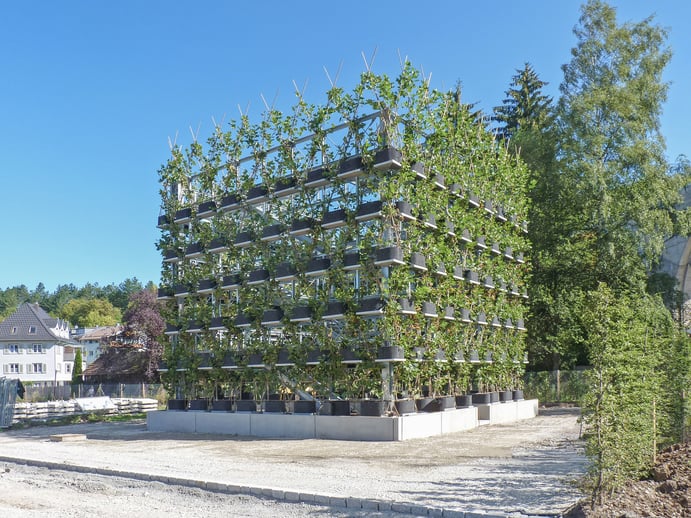 The approach of construction botany is exciting, because the discipline indirectly addresses today's issues: Climate change, urbanization and scarcity of resources. It relies on an environmentally-friendly building material: wood. Mycelia are a similarly sustainable material. Learn more about this in our article "Mycelia: Architecture from fungus".