For residents and visitors to the huge metropolis it is nothing new to see and discover something unusual time after time in New York - the city that never sleeps. The concrete jungle in which dreams can be born and also realized - at least this is what many hope - is undergoing a long-term metamorphosis.

Old buildings are being demolished all the time and new ones put up in their place. But what is now being planned or already under way in Manhattan could entirely overshadow all other new constructions - One World Trade Center aside.

“Hudson Yards” is the name of the new neighbourhood to be developed in Manhattan. And the architects have grand plans in mind. A skyscraper, taller than the Empire State Building. A viewing platform, higher than the one on One World Trade Center. A gigantic sculpture which looks like ... yes, what indeed? A beehive? A basketball hoop? A vase? A pineapple? Or at least something of that sort.

“The Vessel”, the name of the ominous structure, shall form the heart of the new neighbourhood. A 600-ton sculpture comprising 154 overlapping staircases and their 2,500 steps shall enable visitors to view New York City from a very different perspective. 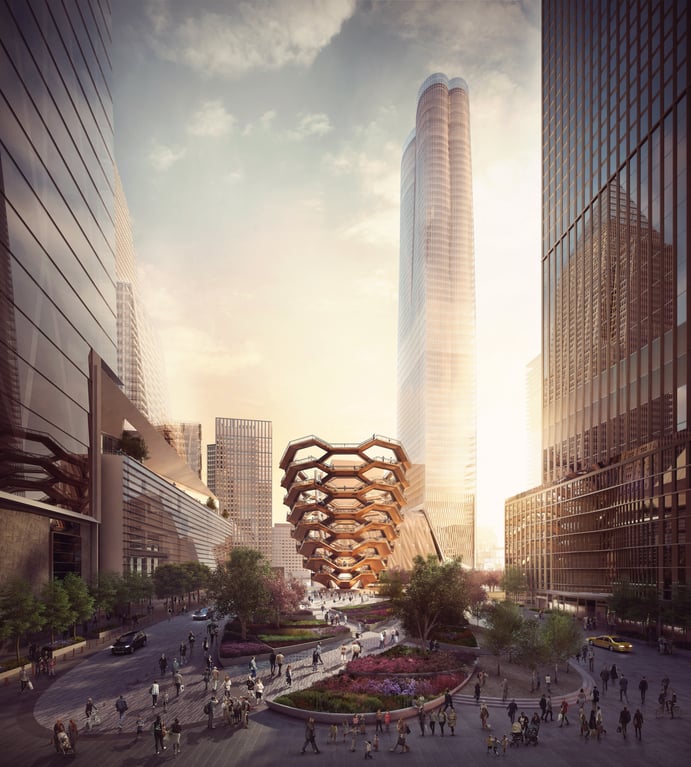 British designer Thomas Heatherwick is responsible for this structure. He was inspired by two things in his plan: Indian stepwells and the fitness craze amongst New Yorkers. Yes, you did hear right. The urban dwellers’ love of sport. The building is due to be completed in 2018. So, whether or not the sports-mad New Yorkers will meet here for their workout remains to be seen. But there is also some good news for those who are not so sporty: there is a lift to the top.

Bietigheim-Bissingen is not New York City, but there you find another extraordinary building project. The "SKY-Tower" lives up to its name.

“The Vessel” – the year-round Christmas tree

What the Eiffel Tower is for Parisians, “The Vessel” shall be the for New Yorkers. Only the Eiffel Tower was considerably cheaper to build. “The Vessel” is set to cost more than 150 million US dollars. Unsurprisingly, with the individual elements being specially made out of bronze, steel and concrete in Monfalcone, Italy. But this comes at a price. The hope of Stephen M. Ross, the founder of “Related Companies”, the firm implementing the mega-project, is for the building to have a status, or particular importance, similar to the Christmas tree at the Rockefeller Center at Christmas. But throughout the entire year.

According to the construction company responsible, Hudson Yards is the biggest non-public building project in the history of the United States of America, and also the biggest development in New York City since the Rockefeller Center. The entire construction is scheduled for completion in 2025. At that time the vast site of 17 million square metres will include 4,000 apartments, several office blocks, three parks, numerous shopping facilities and restaurants, plus a school and a luxury hotel.

Anyway, it will be a while until everything has been realized. Just how successful “The Vessel” can be on the large site surrounded by skyscrapers remains to be seen. Perhaps then sports freaks will climb the seemingly never-ending stairs with the regular NYC tourists and embrace right at the top, exhausted but happy. “Yeah, made it!” Or maybe not. Perhaps people will just meet over a cosy coffee and discuss the form of the building. “Hey, Michael! Pineapple, beehive or basketball hoop? What do you think?” Whatever happens - it is certainly going to be a people magnet of superlatives.