Copenhagen is pursuing ambitious goals. By the year 2025, the Danish capital would like to be the first CO2-neutral metropolis in the world. Already today it is considered an experimental field for sustainable urban development. In this article, we will present to you the pioneering concepts of the city on the Öresund.

With the opening of the "Green Lighthouse," Copenhagen made an architectural statement in terms of climate neutrality in 2009. The sustainable energy concept of the CO2-neutral university building is mainly based on the use of daylight. The roof, as the fifth facade, has a flat angle of inclination. When the sun is at its highest, it lets in intense sunlight into the interior and absorbs heat.

In addition, the concept contains a combination of district heating, solar cells, solar heating, solar cooling and seasonal energy storage. In this way, the Green Lighthouse consumes up to 75 percent less energy than conventional buildings. Another goal of Copenhagen is the basic renovation of old buildings in order to make them more energy efficient. According to the government, one-third of the total power consumption of the city can be saved in this way.

The bicycle is the main means of transport in Copenhagen. On a bike route totaling 390 km, around 35 percent of the residents make their way from A to B. The number of bicycles thus now exceeds that of car users. Blue-colored fast-track bicycle routes with a special coating have speed displays and DIY repair stations. A special traffic light switching ensures cyclists a clear trip at a constant speed of 20 km/h with a continuous green wave, without waiting for a long time.

Learn more about energetic sustainability and efficiency in the implementation of the biggest office building in Baden-Württemberg using passive building standards.

For those who cannot do without the convenient four-wheel version, however, one of the many car-sharing offers can be utilized or electromobility can be invested in. Copenhagen has an excellent infrastructure for alternative drives and free charging stations.

Swimming in the harbor water

Another achievement in the sustainable urban development of Copenhagen can be measured in the quality of the water. Industry disappeared from the inner city when the machine and shipbuilding company B&W closed in 1995. Today the harbor basin is so clean that freely accessible swimming spots are open in many places. Proof of the excellent water quality is also provided by an aqua farm in the district of Langebro, where mussels are bred. 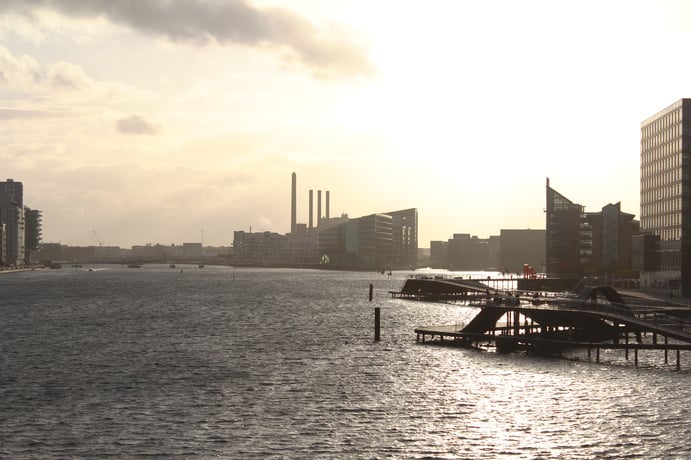 Skiing on the municipal incineration plant

Denmark has one of the most innovative concepts for waste disposal. Its thermal waste recycling is based on the system of burning household waste and converting it into heat and electricity. But waste incineration systems suffer from an image problem due to their industrial architecture in the form of smoking chimneys. With the new "Amager Bakke" system in line with a design by the star architect Bjarke Ingels, this is to change and new standards are to be set in terms of technology and design. The building outside of Copenhagen is not just meant for waste incineration, but at the same time is a landmark, ski slope, energy provider and memorial for CO2 emission.

Ingels dealt in detail with the multifunctional use of the building and the social discussion about climate policy. With a height of 100 meters, Amager Bakke is an architectural landmark that will give visitors a 360-degree view of Copenhagen from a panoramic restaurant. The roof of the facility will be converted into a ski slope in the winter with varying degrees of difficulty. Amager Bakke is already set to be completed this year. With innovative architecture like this, leisure time and industrial-energetic benefits are combined with each other in a smart way.

Green spaces in the fight against climate change

Many parts of Copenhagen are flooded due to the climate change, which is contributing to the heavy rainfall. The costs for clean-up work are now reaching in the millions of euros. This is why the city decided to combine solutions for reducing the flooding risk with the revaluation of public space. They succeeded in this by procuring green spaces and minimizing sealed surfaces. Thus the park "Tåsinge Plads" for example has a low-lying and planted seepage basin, which collects the rain drainage, which in turn serves to irrigate the park during dry periods.

All of these examples show that sustainable urban planning can be successfully realized with creativity and commitment. Northern cities such as Copenhagen or Malmö in particular are setting good examples here. They serve as a source of inspiration for city planners, engineers and architects around the world.