In order to meet the requirements for sustainable urban planning in densely populated metropolitan areas, South Korean city planners have been pursuing a concept to construct a so-called "Power Center" since the start of the 21st century. These compacted centers in congested urban areas are the epitome of sustainability in urban planning. We show you what such a Power Center can look like as part of our series "The City of the Future" using the planning example of the South Korean city of Gwanggyo. 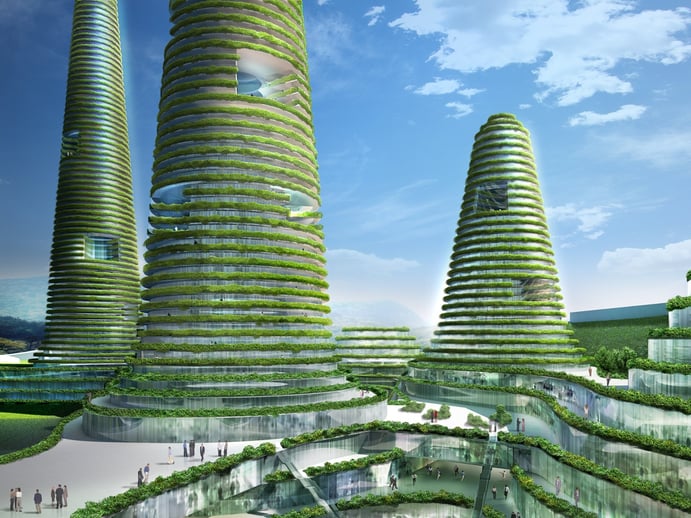 The young city of Gwanggyo is located about 35 km south of the South Korean capital city of Seoul in the Techno Valley and was built in 2004. The municipality of the city and the Daewoo Consortium 2008 issued an urban construction competition for the construction of a Power Center in Gwanggyo's city center for the planning of a new town with an orientation for up to 77,000 inhabitants. The contract was awarded to the Dutch architectural firm MVRDV based in Rotterdam. The design proposal submitted by MVRDV impressed with its sustainable approach: a self-sustaining city in the future.

Sustainability starts in a small idea: How the Microsoft Österreich GmbH realized the necessity and importance of a healthy indoor climate at the workplace.

The futuristic building concept for Gwanggyo consists of organic lines and cone-like forms. The hill-like buildings are built in a structure made of concentric rings that taper upward and terminate with a plateau. Every story is covered by a green hedge landscape. The innovative solution from MVRDV in the form of a ring structure meets various requirements for the phasing, positioning and the size of the building. By varying the ring size, each story has a terrace for outdoor living. The Gwanggyo Power Center combines a wide range of uses here of the total 11 km² building area into one interactive center and offers space for apartments (200,000 m²), offices (38,000 m²), space for retail, education, leisure time and cultural facilities (200,000 m²) as well as for parking spaces (200,000 m²).

Sustainability in urban planning due to sophisticated design

The Gwanggyo Power Center is also remarkable in terms of sustainable urban development. The green facades filter the circulating air and thus improve the ventilation and climate naturally. An internal irrigation system saves excess water, which is used in a recirculation cycle to irrigate the green landscapes. This makes an external hydration source obsolete, which also has a positive effect on the energy balance of the Gwanggyo Power Center. The building design as a vertical park thus makes it possible for the new city to be completely self-sustainable. The aim of the Gwanggyo Power Center is also to reduce the mobile dependency of the city inhabitants on cars and trains and to promote a feeling of community. You will also find similar approaches using the example of Arcosanti in the desert of Arizona. In addition to the positive effects on the environment and the social coexistence of city inhabitants, the city of the future also fits harmoniously into the surrounding nature of wooded hillsides and a large lake.

Gwanggyo, the perfect city of the future?

Similar intersections with various requirements are increasingly being found in South Korea. The Gwanggyo Power Center is a promising draft for sustainable urban planning and offers good starting points for the urban planning of the country. While the starting shot for the building project was to already occur in 2011, Gwanggyo at the time still remains a fictional city of the future.

Previous post: Sustainable architecture: Copenhagen is setting new standards
Next post: Purchase or rent software? 4 reasons why a purchased license is worth it