Not millions but billions: the 20 most expensive buildings in the world

Extravagant buildings do not come cheap. Investments of several millions or even billions are required in order for them to be realized. The result of these investments are mostly vast luxury buildings with all the gimmicks. Here are the 20 most expensive buildings in the world: 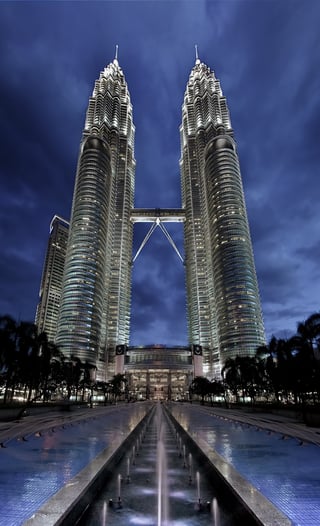 1.16 billion dollar was what it cost to build the two twin towers in the Malaysian capital. The 452-metre high towers were completed in 1998 and built by petroleum company Petronas. 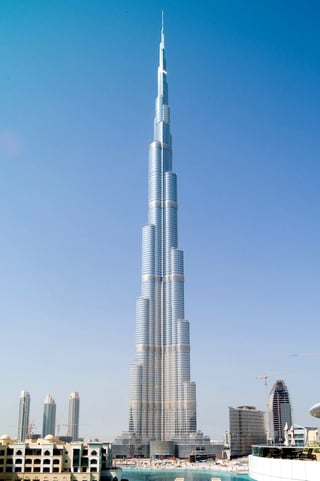 Construction of what is currently the tallest skyscraper in the world gobbled up around 1.5 billion dollar. Despite its height of 828 metres the construction work took just six years.

Bietigheim-Bissingen is not New York City, but there you find another extravagant building. The "SKY-Tower" reaches new heights. 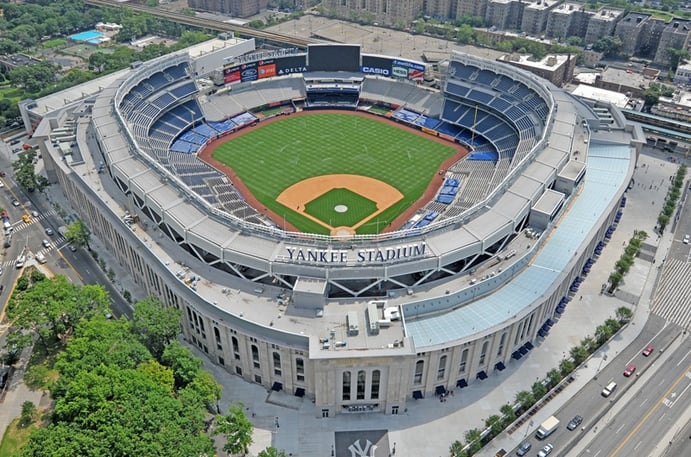 The baseball stadium of the New York Yankees is the most expensive sports venue in the world at a cost of 1.5 billion dollar. The original stadium was built in 1923 and demolished in 2010. The new stadium was then built in the immediate vicinity. It took three years to complete the building. 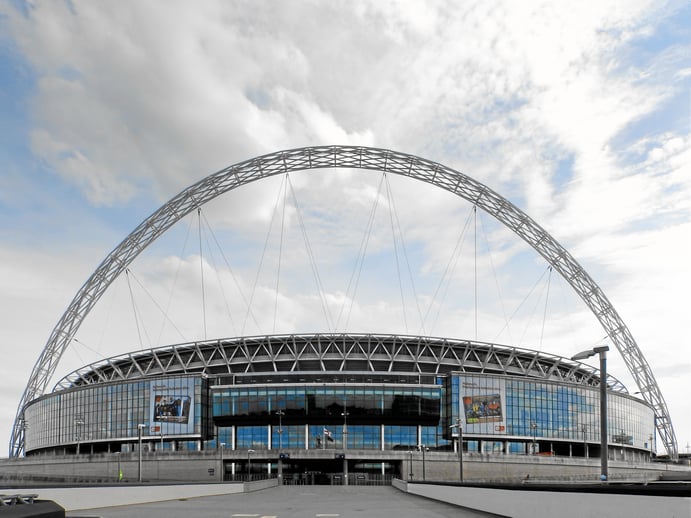 The costs of this building also total 1.5 billion dollar. As with the Yankee Stadium, the first Wembley Stadium was replaced by a new stadium. With 90,000 seats and a retracting roof it is the world’s largest covered arena. 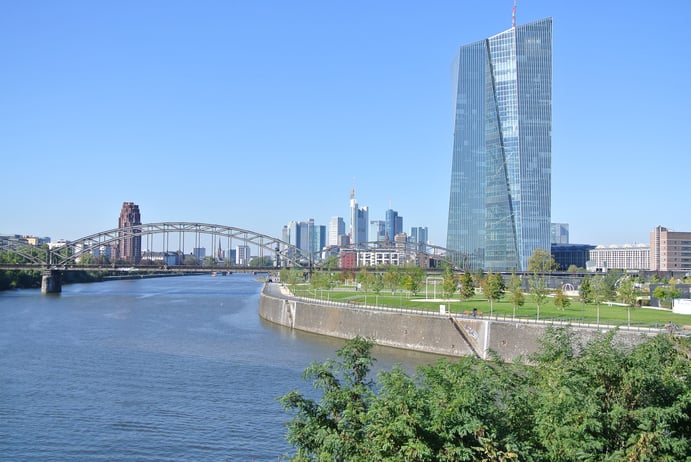 The new European Central Bank building in Frankfurt am Main contains 2,300 offices. The building is made up of three parts: the former wholesale market and a north and south tower. It took four years to build. The costs involved were 1.57 billion dollar. 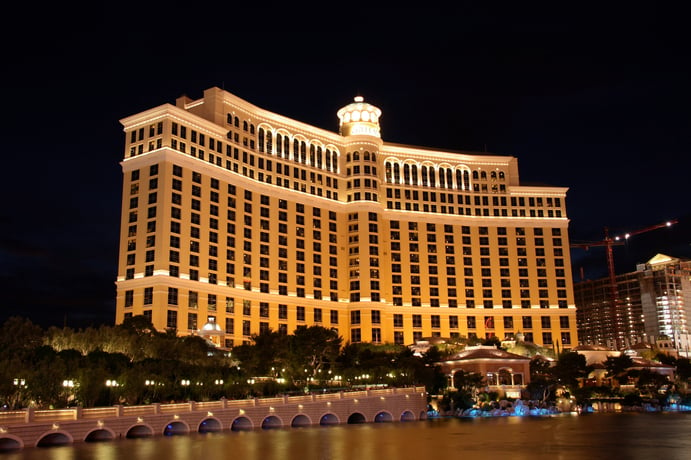 The casino and luxury hotel in Las Vegas has 3,950 rooms and is one of the biggest hotels in the world. It is best known for its opulent fountains. The lake in front of the hotel contains over 1,200 jets and around 4,000 lamps and these enable a breathtaking, computer-controlled water show. The hotel cost 1.6 billion dollar. 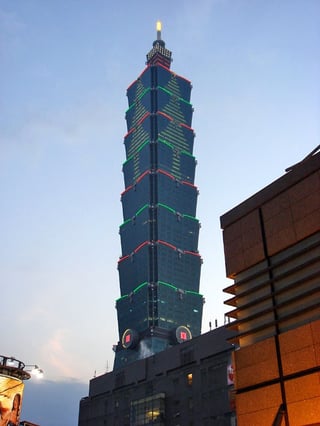 The Taipei Financial Center was at one time the tallest skyscraper in the world until it was overtaken by the Burj Khalifa. But the height of Taipei 101 is not to be scoffed at either. At 508 metres tall the skyscraper towers reach above the city skyline and after “One World Trade Center” in New York it is the second tallest office building in the world. The Chinese spent a substantial amount of money on its construction; 1.8 billion dollar. 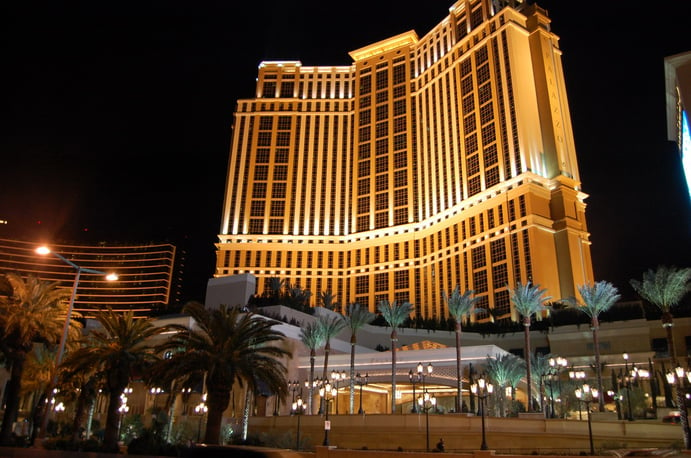 Another casino hotel has made it amongst the world’s most expensive buildings. At a height of 196 metres it is the tallest completed skyscraper in the city. There are 3,068 rooms over 53 floors covering an area of almost 100 square metres. The constructors paid out 1.8 billion dollar for this building. 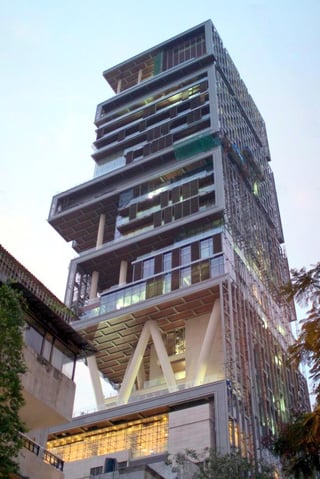 The biggest and most expensive detached house in the world is situated in India. It belongs to the billionaire Mukesh Ambani. The architecture of the building is inspired by the Hanging Gardens of Babylon. The building is named after the mythical island Antilia that was reputed to lie in the Atlantic Ocean. The costs were around two billion dollar; although information varies greatly in this respect. 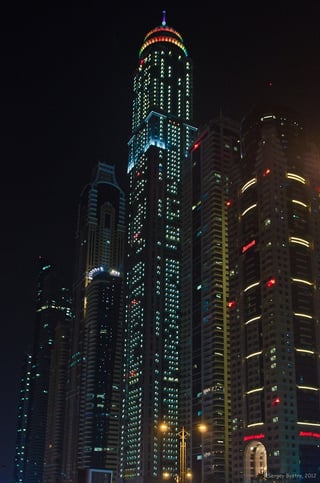 And once again a skyscraper in the United Arab Emirates. At a height of 414 metres it is the second tallest building in the city. Spread over 101 floors (plus six other below ground) there is a pool, a fitness centre, a sauna, a daycare centre, a car park, retail and boutiques and a games centre and, of course, many apartments. Total costs: 2.17 billion dollar. 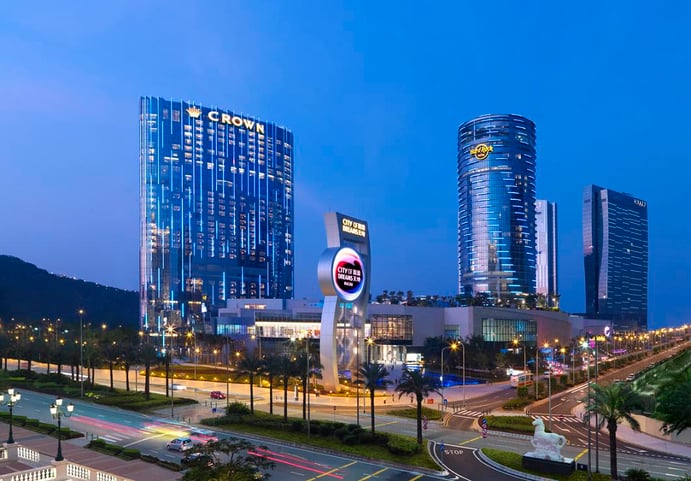 The resort and casino in China features 450 gaming tables and 1,514 machines and more than 20 restaurants over an area covering more than 39,000 square metres. The hotel also has 1,400 bedrooms. Total costs: 2.4 billion dollar. 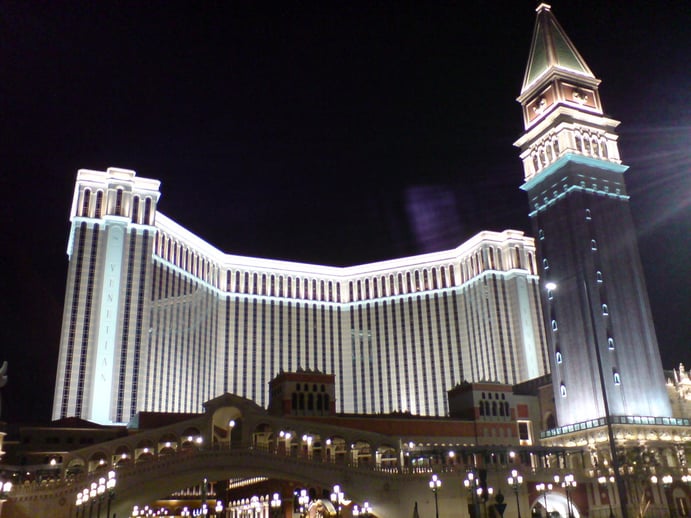 The ninth position also goes to China. At 980,000 square metres the Venetian Macao is the biggest hotel in Asia and the seventh largest building in the world in terms of floor space. At 800 gaming tables and around 3,400 slot machines people can try their luck in pursuit of the jackpot. As with its neighbouring building the “City of Dreams” total costs here amount to around. 2.4 billion dollar. 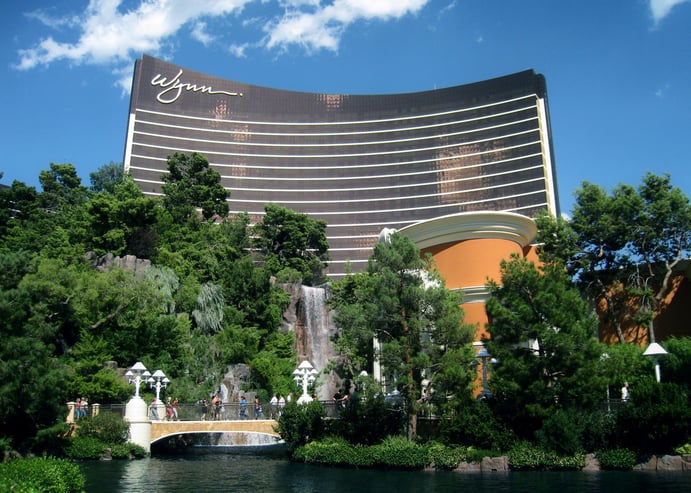 The luxury hotel and gaming casino in Nevada was constructed by real estate tycoon Steve Wynn for the trifling sum of 2.7 billion dollar. The site contains a casino, a lake, 18 restaurants and bars, 26 shops, an art gallery and two wedding chapels. In addition, there is a large conference centre and a golf course. The private art collection of Steve Wynn includes works by Édouard Manet, Andy Warhol, Vincent van Gogh, Paul Cézanne, Paul Gauguin and Pablo Picasso. The hotel’s main attraction is the Lake of Dreams, a man-made lake onto which images are projected. 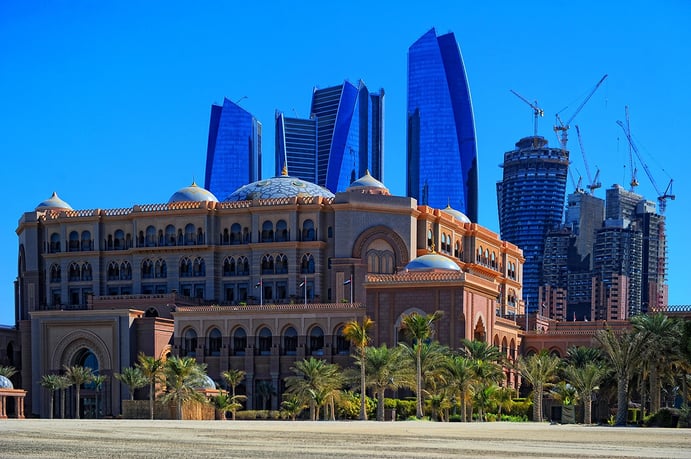 The hotel is considered one of the world's most luxurious hotels and belongs to the ruling family of Abu Dhabi. The Palace cost 3 billion dollars to build. 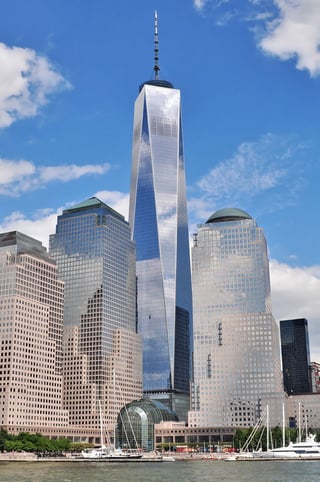 The tallest building in the city measures nearly 514 metres. It was built on the site of the World Trade Center which was destroyed by a terrorist attack on 11 September 2001. In addition to a viewing platform and a restaurant, the building mainly contains offices. One World Trade Center was designed by architect David Childs according to a design by Daniel Libeskind. The original design was changed considerably however. The total costs amount to 3.8 billion dollar. 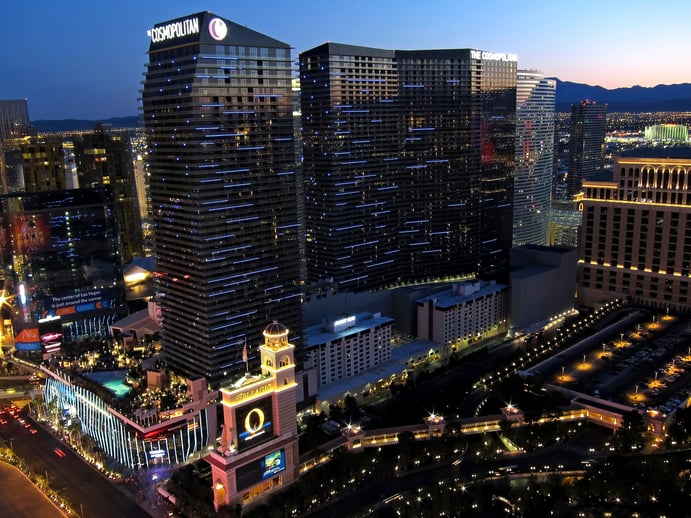 The gambling city Las Vegas makes the top 5 in the list of the world’s most expensive buildings with “The Cosmopolitan”. The facility consists of two towers (each 61 storeys high) containing nearly 3,000 bedrooms and suites. It also includes the casino, restaurants and bars, retail space, a spa and fitness centre and conference rooms and a theatre. It cost 3.9 billion dollar to build and was underwritten by Deutsche Bank. 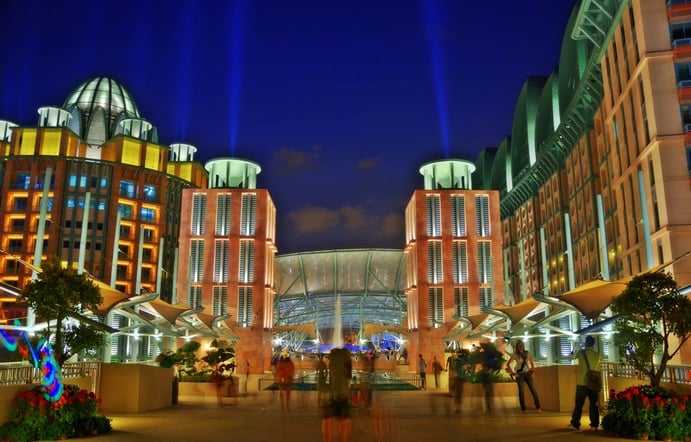 This entire complex on the island of Sentosa on the south coast of Singapore features two casinos, a Universal Studios Theme Park, a water park and an aquarium, containing the world's biggest oceanarium. More than 10,000 employees ensure the smooth running of the site every single day. The cost of the fun: almost 5 billion dollar. 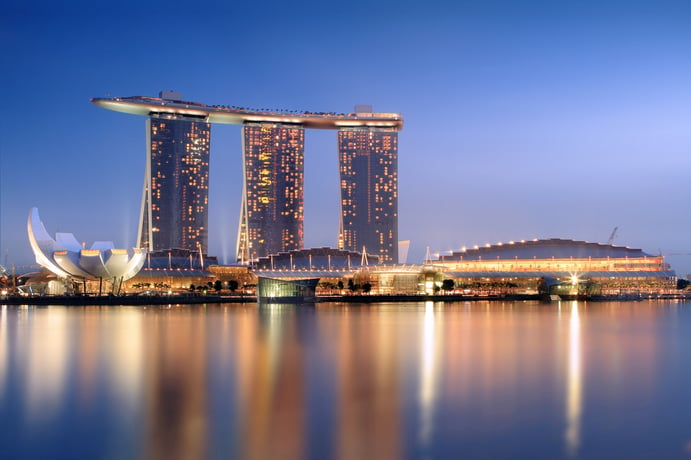 The building comprises a casino, a hotel, a conference and exhibition centre, a shopping centre, an art and science museum, two theatres, and various bars and nightclubs. Three towers, each 55 storeys high, have a roof garden with an infinity pool at a height of 190 metres. Architect Mosche Safdie designed the building and drew inspiration for his model from packs of playing cards. The Marina Bay Sands is considered to be the world’s most expensive stand-alone casino facility at a total cost of 5.5 billion dollar.

The cluster of high-rises with the central skyscraper, the Mecca Royal Clock Tower Hotel, stands right next to the Holy Mosque. After the Burj Khalifa and the Shanghai Tower, it is the third tallest building in the world at 601 metres. The main tower resembles the clock face on Big Ben. A long spire and half-moon figure (diameter 23 metres) adorns the upper end. The world’s biggest clock is installed on the hotel tower. The four clock faces each have a diameter of 43 metres and are illuminated with a total of 2 million LED lights. The building complex with more than a million square metres of floor space was erected in order to accommodate as many Muslim pilgrims as possible. More than 30,000 people can be accommodated there. The costs amount to an estimated 15 billion dollar.

The Al-Masdschid al-Harām is not only the most important mosque in Islam but also the biggest in the world. Together with the Prophet’s Mosque in Medina and the al-Aqsa-Mosque in Jerusalem the holy mosque in Mecca is one of the three holiest places in Islam. The holy mosque contains the Kaaba, the central sanctuary of Islam, in its interior. The building dates back to the 16th century. Nine minarets cover an area of 356,800 square metres. There is space for up to 820,000 worshippers. It is estimated that the total costs of the building come to 100 billion dollar. And that is not the end of it. For a few years the mosque has been undergoing expansion work and when completed it shall be 456,000 square metres large and able to take up to 1.2 million worshippers.