An exciting path across the gorge: the Tamina Bridge in the canton of St. Gallen

With an arched span of 265 meters and a height of 220 meters, the Tamina Bridge in the Swiss canton of St. Gallen towers above the gorge with the same name. This impressive structure was planned by the engineering office Leonhardt, Andrä und Partner. The company utilized the numerous advantages of 3D modeling in the process. In this article, you will learn what characterizes the Tamina Bridge and what challenges the engineers mastered thanks to 3D technology.

© The progress of the superstructure can be seen in November 2015. Fig.: Civil engineering department of the canton of St. Gallen

Newly opened on 22 June 2017, the Tamina Bridge connects the two villages of Pfäfers and Valens, which were previously separated by the deep Tamina gorge. The existing municipal road to Valens always suffered from landslides, rockfalls and road sinking. That is why a public competition was announced in 2007 for the planning and design of a bridge, which was won by the engineering office Leonhardt, Andrä und Partner (LAP). The company was responsible for the structural design as well as for the design planning. The engineers relied on the CAD software Allplan Engineering during all phases. They installed a total of 14,000 cubic meters of concrete, 3,000 tons of reinforcement, 180 tons of pre-tensioned strands and 140 tension member anchorages.

Due to the very steep valley flanks and the large valley depth, the planners designed a structure consisting of an arch and a continuous beam, which is monolithically connected to the arch via horizontal element shafts and arched supports. This structure must withstand numerous stresses, such as wind and earthquakes. The possible failure of a tension cable also had to be safeguarded against. 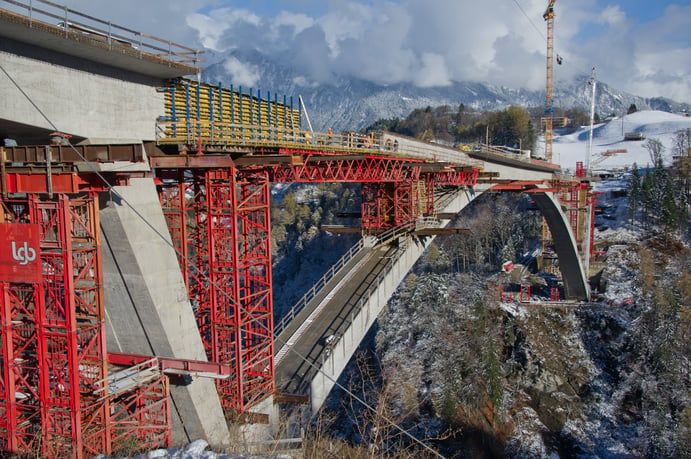 © In the fourth quarter of 2015, the Valens side was nearly complete. Photo: Civil engineering department of the canton of St. Gallen

Less weight for the Tamina Bridge

The structure is designed as a hollow cross-section on more than half of its length. This makes it possible to significantly reduce the total weight of the Tamina Bridge. The superstructure consists of a concrete hollow box with a web of 55 centimeters. The planners were also able to easily house two web tension members side by side. In order to create the necessary space for the pre-tensioned strands, LAP widened the webs and increased the thickness of the roadway slab at the ends of the building sections. 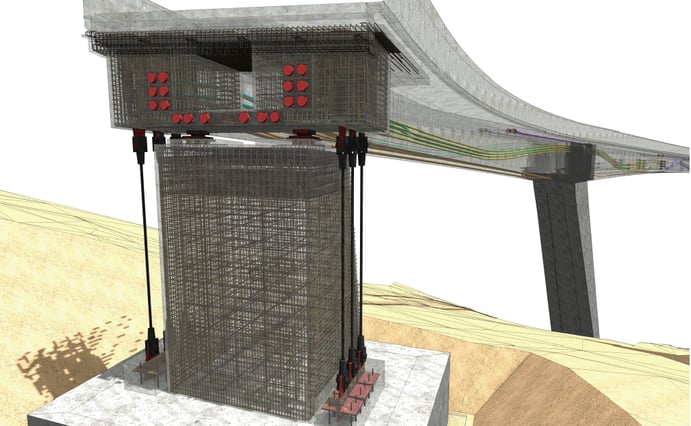 © Anchorage of the pre-tensioned cables with reinforcement and fixtures. Fig.: LAP

LAP was already relying on Allplan Engineering when developing their entry for the competition. The engineering office was able to confirm and optimize the dimensions in the entry in the further course of planning. The modeling in 3D had its advantages, especially in critical areas, such as in the incorporation of the horizontal element shafts in the superstructure. Markus Förster, department head for bridge building at LAP, explains: "Already during the tendering phase, extensive representations of pre-stressed element guiding and reinforcement were required to demonstrate the building capability of the draft on the one hand and similarly to make the tendering construction companies aware of the challenging framework conditions.

For example, the planners integrated each of the 55 concreting sections of the arc exactly into the 3D model. This facilitated the desired position of the individual elements and the precise measurement of the formwork. In this way, the engineering office was able to plan the complex Tamina Bridge holistically and without collisions. A similarly challenging structure for the engineering office is the extension of the Waal Bridge in the Netherlands, which was also built with the help of Allplan Engineering.

Previous post: Component activation: How it works and what it offers
Next post: Modern prefabricated homes – Energy efficiency from a kit