The subway as an art experience - Surreal architecture in Stockholm

Are subway platforms gray joyless places that you want to leave again as quickly as possible? Not in Stockholm. The metro network in the Swedish capital is much more of a playground for creative people: Over 150 architects, painters, sculptors and staging artists have immortalized themselves in the "Tunnelbana." The result is an impressive exhibition of works at depth that proves that subway architecture is anything but boring.

The first stations of the Stockholm "Tunnelbana," or "T-Bana" as the subway is also called, were built in the 1930s. Today, the system not only connects 110 km of railway track from different end stations with unpronounceable names, but also the 14 islands of the city with the mainland. Escalators and elevators lead through hard Scandinavian granite down to the train platforms below. There are 100 stations spread across three lines: red, green and blue. The special thing about them: More than 90 of them adorn works of art. Since the mid-1950s, it has been the tradition for each new station to receive its own creative staging.

As differently as the Stockholm metro stations are designed, many of them have one special feature: They impress with their colorful rock structures, which make up the special style of the train station architecture. One particularly impressive specimen of these cave train stations is the "Solna Centrum" stop. The walls and ceiling glow a deep red, like glowing lava or a fiery inferno. The delicate green conifer forest below, which adorns the stop for a kilometer, has a peaceful counter-effect to this.

The T-Centralen station is located at the city center where all lines intersect: A labyrinth across four levels. It all started here in 1957. Stockholm received its first underground art production. Slender grape vines in cobalt blue entwine up to the white vaulted sky.

Wall reliefs made of tiles that line the tracks testify to the decorative taste of time times. The stations from the 1950s are called "bathroom train stations" due to their tiles. You'll know why when you're standing on the train platform. 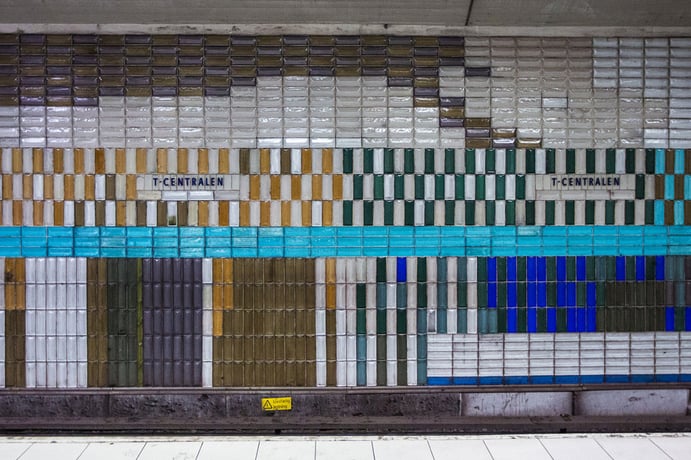 Kungsträdgården: Time travel into the past

If you would like to get from the entrance of Arsenalsgatan to the train platforms of the Kungsträdgården stop, you will stroll past ivy-entwined columns and busts into the depths. Down below, travelers feel more like they are at an archaeological site than a metro station. The train station is designed like an underground garden. It tells the story of the Baroque park that was once built up above at the surface and belonged to the now-destroyed Makalös Palace. Some of the stones and busts are remnants. The ivy is also real. Beams of light provide the necessary light for the plants. They also provide the appropriate mystical atmosphere in the mysterious grotto landscape.

Tekniska högskolan: A game with shapes

The Tekniska högskolan station near the Royal Institute of technology offers another surreal travel experience. A gigantic dodecahedron hangs from the ceiling here. Geometric drawings adorn the smoothly polished train platform and the color of the trains rushing past matches perfectly with the blue of the vaulted painting. 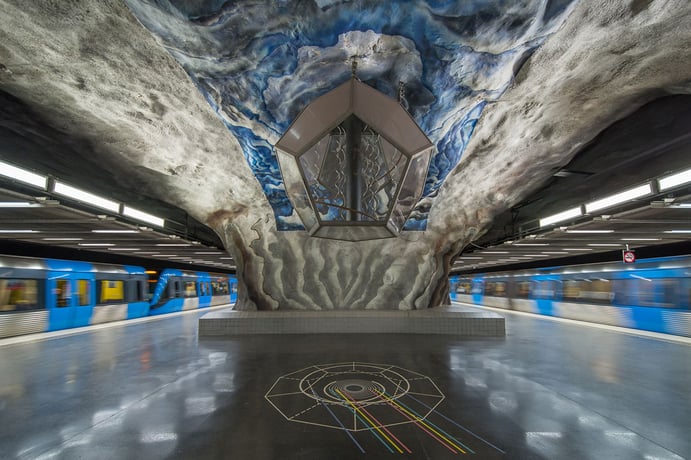 In cities around the world, creative subway architecture is on the list of must-sees for tourists. Visitors to Stockholm can experience the underground art exhibition officially as part of a tour. The cost: A valid metro ticket.

Previous post: 5 inspiring documentaries that every architect should know
Next post: A High-Rise Made of Wood? The urban timber construction of today can do that