Amorphous building in Germany, Europe and the world

Spectacular projects of Blob architecture stand alone internationally with their curious aesthetic. Flowing shapes, gentle motions and complex structures characterize this movement. It developed in the 1990s thanks to increasing digitization. Innovative CAD software now enabled architects to incorporate concave and convex lines into the exterior form of buildings. This trend is also known under the name of amorphous building.


The buildings in question are often constructed as a solitary structure since they are not easy to integrate into the cityscape on account of their unusual design. Nonetheless, renowned architects have succeeded in including the history and environment of the particular place in their designs. Some of these projects are set out below.

Schlump One in Hamburg

The team of J. Mayer H. Architekten pursued an amorphous construction for the conversion of this administrative building in Hamburg. Horizontal window lines alternate with curved strips of plaster. The characteristic soft corners and edges of blob architecture are found on the exterior facade and in the surrounding open area.

Find out more about how much freedom and precision in modeling is possible with ALLPLAN.

In this project Gnädinger Architekten were inspired by the link between nature and technology, which lies at the heart of Otto Bock Medical Health. The design of the white aluminium glass facade is evocative of muscle fibres. The six-storey headquarters in the heart of Berlin presents itself as an open, easily accessible institution.

Extension to the Federal Environment Agency in Dessau

The new building will be built as a solitary structure and shall conform with the minimum standard of a zero-energy house. This project currently under construction provides space for around 100 employees and also houses two medium-sized conference areas. Anderhalten Architekten realize the amorphous lines with glass and photovoltaic elements which tilt towards the sun. 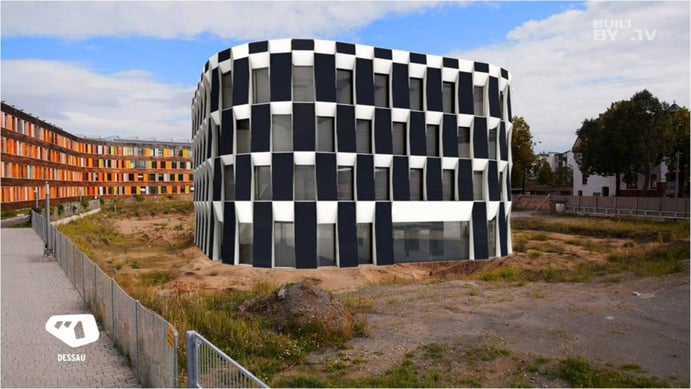 In the 13th arrondissement of Paris this futuristic new building towers in front of a historic facade designed by Auguste Rodin in 1869. The building is covered with a layer of 1,000 square metres of aluminium louvres which act as sunshades. Precious materials such as wood and steel combine in the interior. At night the cupola by Italian architect Renzo Piano radiates above the rooftops of the French capital. 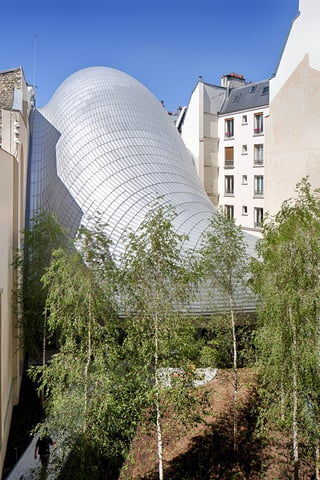 Architects such as Frank Gehry also use the opportunities of amorphous construction in skyscrapers. The 267-metre tall building in Lower Manhattan appears as two columns alongside one another. Undulating lines and diverse structures soften the facade and depending on the angle of view create a different look. The reinforced concrete construction is covered with greyish shimmering aluminium louvres.

Architect Zaha Hadid provided the design for the new football stadium in Qatar, in which matches are to be played for the first time at the 2022 World Cup. The historical surroundings and the history of the country defined the design: curved lines and a white shimmering surface. They are reminiscent of the traditional Arabic boats of the pearl divers, the so-called dhows.

This university building currently under construction is to radiate modernity and progress. To this end, architect Santiago Calatrava combines a curved roof construction with a metal facade. The cultural centre combines simple materials in its interior such as stone, steel, glass and metal. The roof lines correspond with the typical Taiwanese architecture. 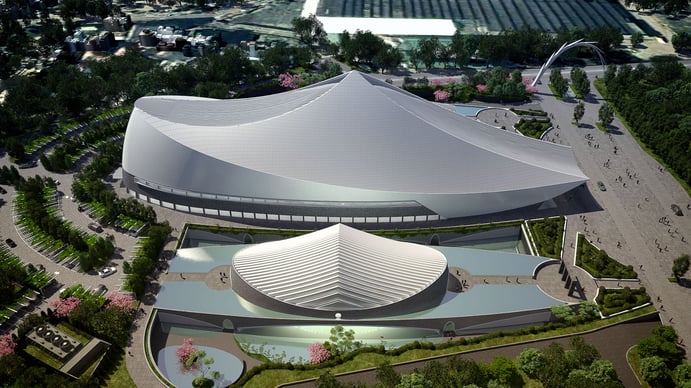 Blob architecture is a global trend

Not only in Germany are architects creating sculptural masterpieces which combine expressionist elements with the features of classical construction. Free forms and symmetry complement each other in these public buildings, aesthetics and function are closely connected.

Previous post: Building with bamboo or wood: which material is better suited for the supporting structure?
Next post: Innovative facade solutions: tomorrow’s architecture has many faces