A moving unity monument: The "Scales"

The fact that Germany is a unified country today is in large part due to the hundreds of thousands of courageous people who took to the street in 1989 and 1990 in the former GDR to stand up for their freedom. In a historically unique peaceful revolution, they brought about the end of the SED [East German Communist Party] regime and the opening of Germany's internal border, thus paving the way for reunification. Deutsche Gesellschaft e.V. has long endeavored to dedicate a monument to these people. After a number of adversities, this is now finally going to be built based on a design by the architectural firm Milla & Partner and the choreographer, dancer and opera director Sasha Waltz. 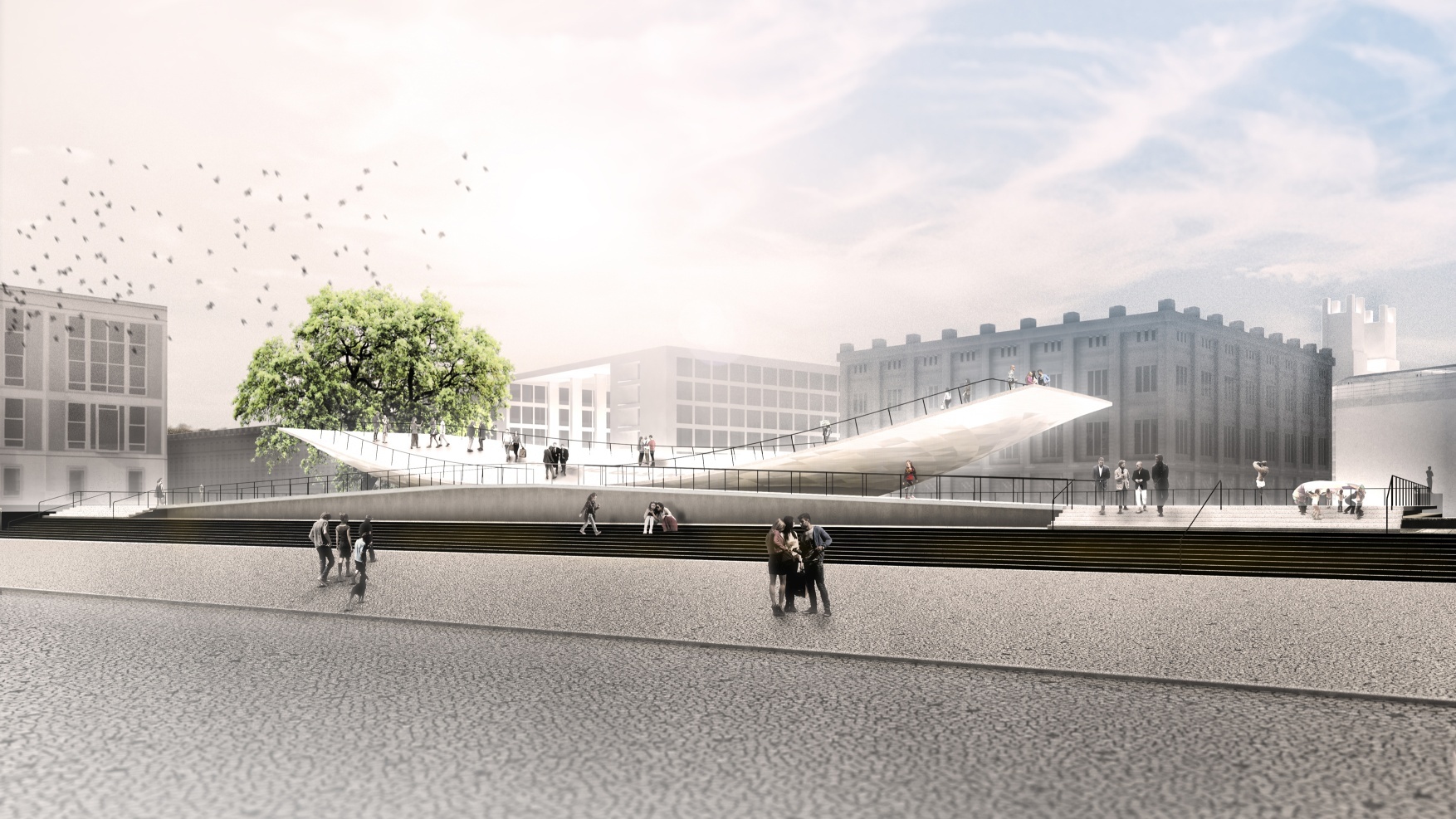 "Citizens in Motion" is the name of the draft of the Stuttgart-based architectural firm, which will soon be realized at the base of the former National Kaiser Wilhelm Monument in front of the Berlin Palace. It's an apt name, because ultimately citizens will be able to shape the image of the monument through their own movement. And they can do so repeatedly. The draft namely provides for a 1,400 square meter large bowl, which as scales that can be walked on actually tilt to one side as soon as it reaches a weight of about 20 people. The degree of tilt is determined entirely by the ratio of participating people, as with true scales.

Freedom and Unity as a Process

The draft is based on the idea that freedom and unity are not static states, but rather always need to be redefined and require commitment. This procedural quality forms the idealogical core of the monument. In order to move the bowl, the visitors have to communicate and decide to act together – just like for the peaceful revolution of 1989. In large letters, the slogan "We are the people" as well as the phrase "We are one people," which emerged a little later, represent a direct reference to the historical event. 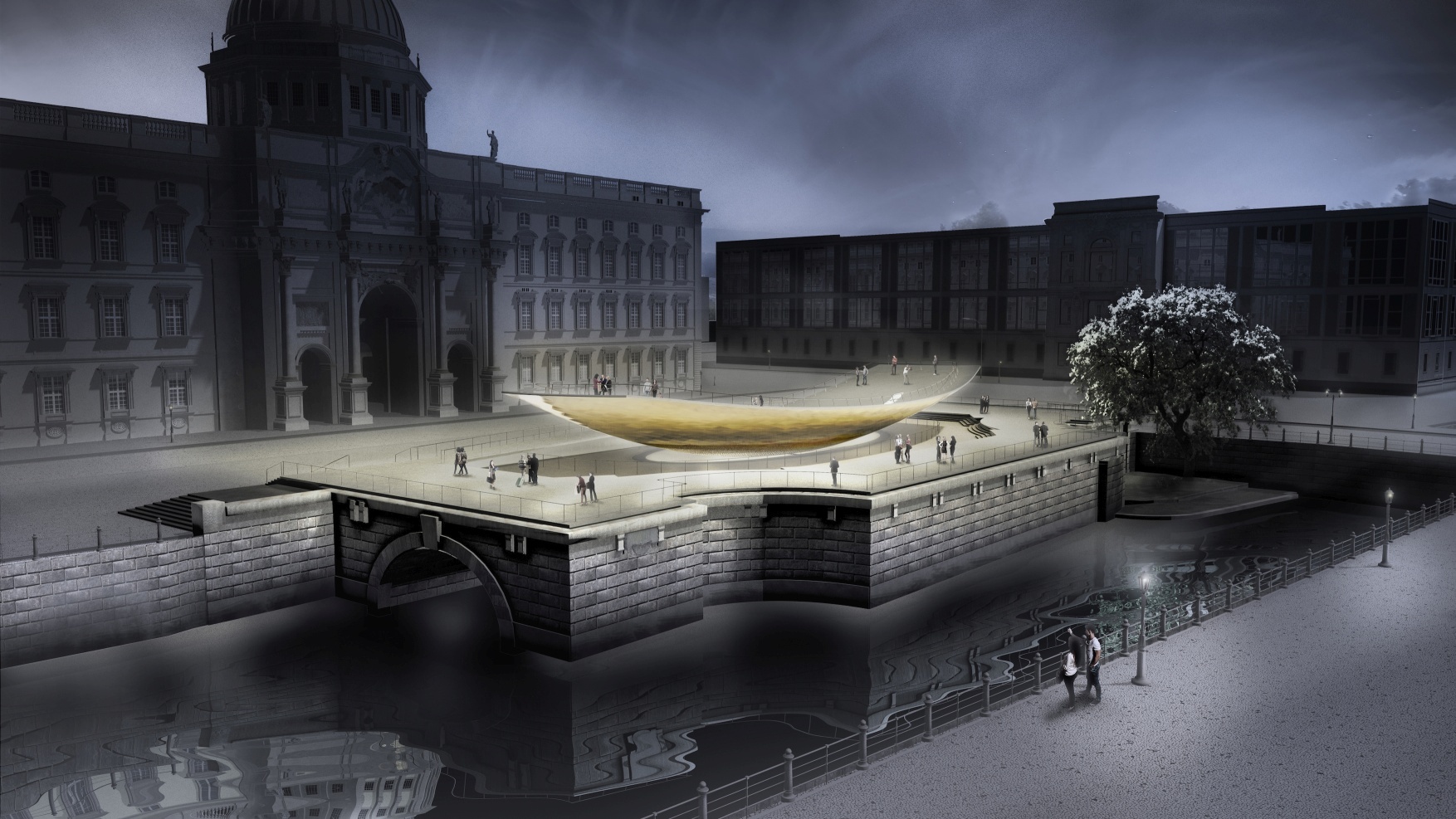 Structurally, the "scale pan" is a weight-optimized space framework made of steel components, as is known from bridge construction. This measures 50 meters along the longitudinal axis and 18 meters on the transverse axis. The bowl tapers from 2.5 meters at its thickest point in the middle to a few centimeters on both ends. While the outside is clad with faceted light metal panels, bonded double-crushed chips cover the top side ensuring slip-resistance and a good seepage of rainwater.

For safety, railings as well as an additional grid are provided at the pivot. A combined spring and damping system ensure that the scale moves slowly and gently so that it takes about one minute for the amplitude of 3.2 meters. The downward movement is stopped 80 centimeters above the ground.

The draft was already established as the winner of the competition for the freedom and unity monument in April 2011. After delays, including the relocation of bats, and the continued development by architects until it was ready for construction, the building permit was finally granted in October 2015. Due to various misunderstandings with respect to the allegedly increased building costs and the associated decisions by the budget committee of the federal parliament, which ran counter to the project, it was put on ice for more than a year and a half. On June 01, 2017 the construction of the monument was finally decided on in a plenum of the federal parliament by a large majority. The inauguration is intended to be on the 30th anniversary of the fall of the Berlin wall on November 09, 2019.