Transparent wood - the glass of the future?

Wood continues to emerge as a material with a promising future for the construction sector. Not without reason has it been used for centuries for constructing buildings. Globally scientists are working on refining the sustainable raw material. For example, not only has this led to environmentally friendly insulating materials but also a revolutionary building material: transparent wood. In this post find out what is behind it, how it is manufactured and where it can be used in the future. 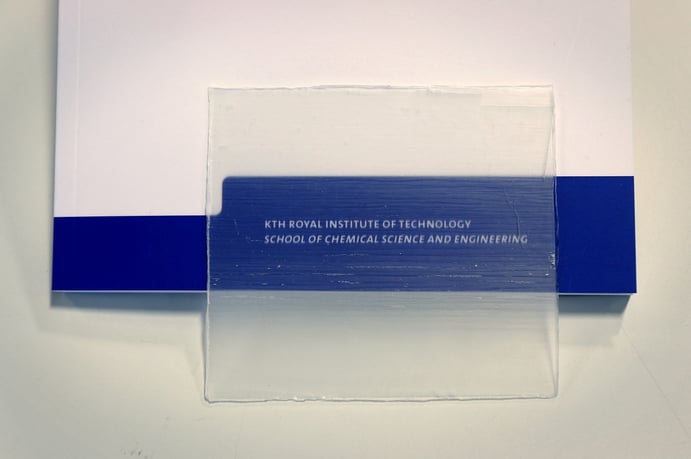 In the electronics industry transparent cellulose fibres have been used for years. As organic LEDs, they are considerably more energy efficient than traditional LCD technology. Using this approach, in 2016 working in parallel two teams of researchers developed the first samples of transparent wood. This form is set to be applied in the future in construction.

The first team around materials’ expert Liangbing Hu conducts research at the University of Maryland (UMD). The second team works at KTH Royal Institute of Technology in Stockholm under the guidance of Lars Berglund, professor at the Wallenbergzentrum for timber science. The transparent wood from their research visually looks like frosted glass, and at the same time it is more resistant and insulates better than glass.

The building material is of interest and promising for several reasons: “Wood is by far the most widely used building material of biological origin. It is attractive because it comes from renewable sources. It also has excellent mechanical features such as stability, resilience, low density and a low thermal conductivity,” according to Lars Berglund.

Similar manufacturing processes for transparent wood in Maryland and Stockholm

The wood goes through various chemical and physical processes and is then analyzed in terms of its mechanical features. The scientific approach adopted by the two teams of researchers is very similar. Firstly, they dissolved the lignin molecules from the wood. They are responsible for both the brown colour of the material and also an opacity somewhere between 80 and 95 percent. During what is referred to as delignification a white wood is created. In order for it to become transparent, the researchers coated the cell structures with synthetic polymers.

As a basis, the scientists at the UMD used limewood and synthetic resin as a polymer. At the KTH they used balsa wood and treated it with acrylic. The wood was up to six times as robust as the unprocessed building material and twice as strong as plexi glass/perspex. Furthermore, the opacity is now at around 85 percent. The typical structure of the wood remains intact however. Light flows through the tube-like channels. They act as a kind of “pointer/direction indicator” which glass does not possess. This has a decisive influence on the new areas of application.

At present, scientists identify three major areas for the revolutionary building material in which it could be applied. One area concerns the design of semi-transparent facades. Natural light flows into the building through the transparent wood. At the same time, privacy is protected since the material has a high opacity. The same effect can be used for solar cells: the incoming light is not reflected or refracted unnecessarily.

It is also possible to use it for windows. As transparent profiles they provide the necessary thermal insulation but at the same time allow the sun's rays into the inside of the rooms. The building material can also be used as an alternative to glass or window glass because it is made of a renewable raw material.

Transparent wood not only consists of a convenient and sustainable raw material but can already be produced in large quantities today. The scientists continue their research though and want to find out with which kinds of wood the transparency of the material can be increased even further. For architects and engineers new design leeway and technical possibilities emerge for cladding buildings with the new material on a large scale.