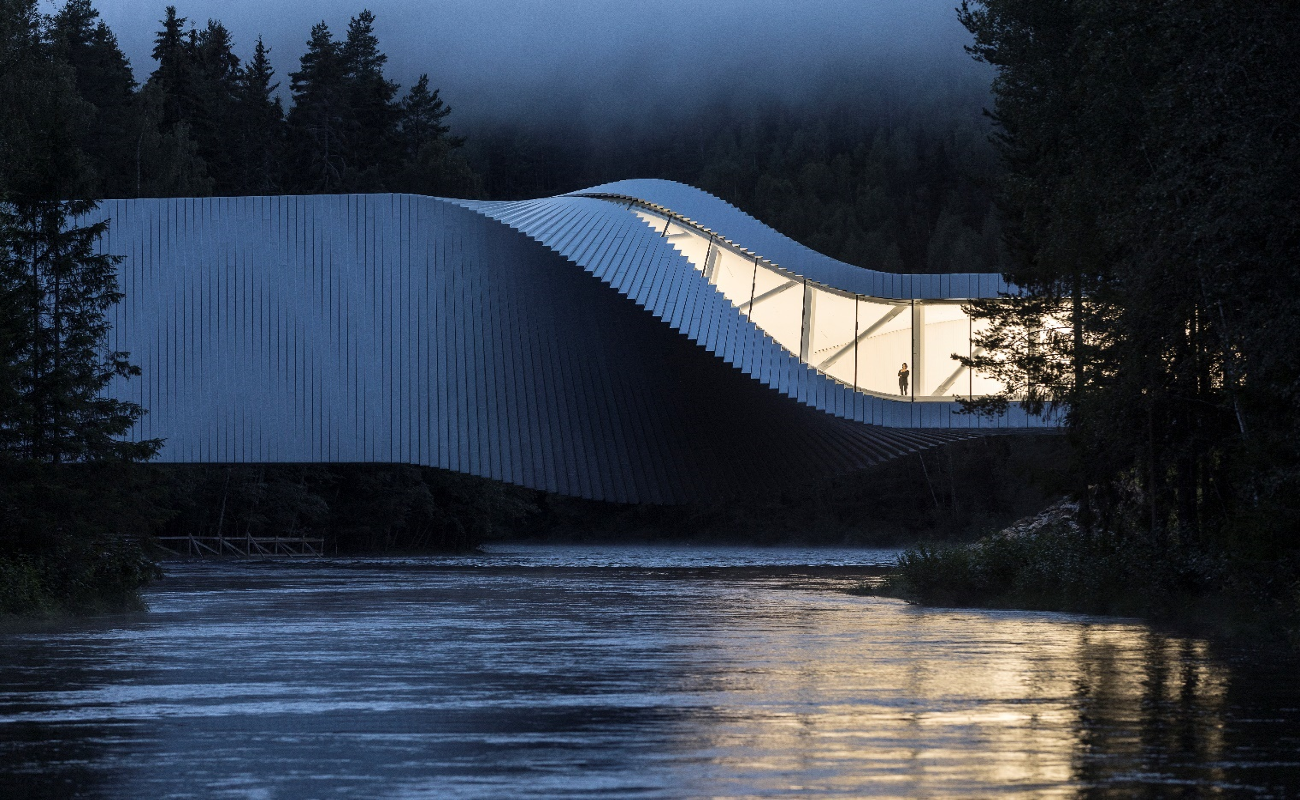 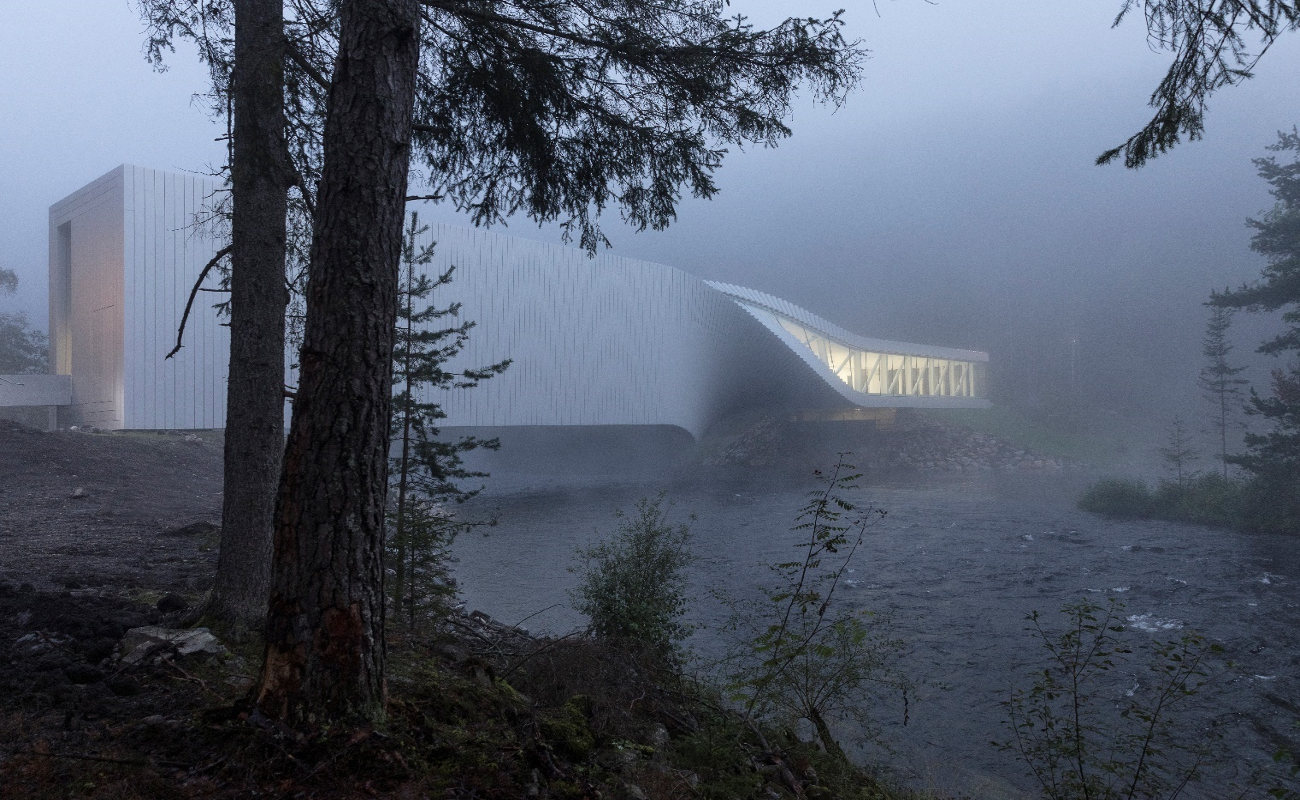 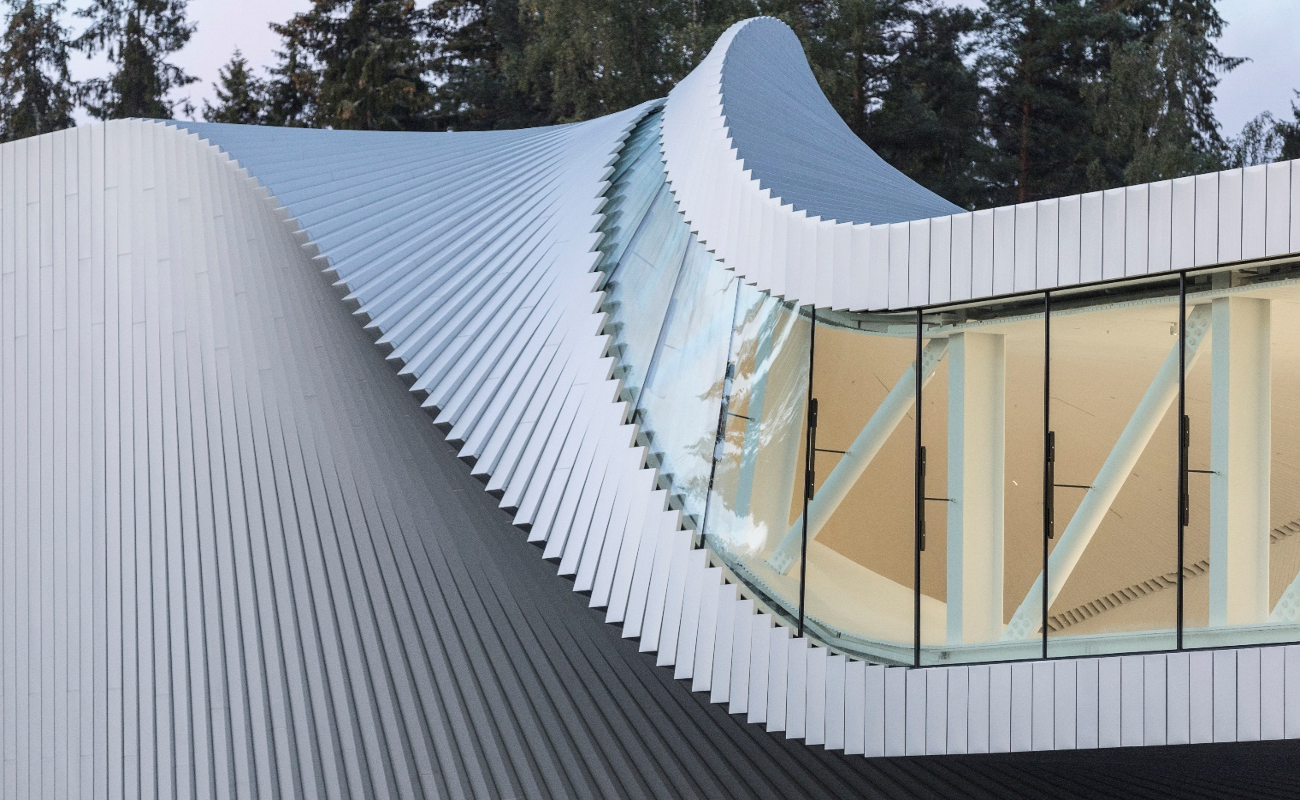 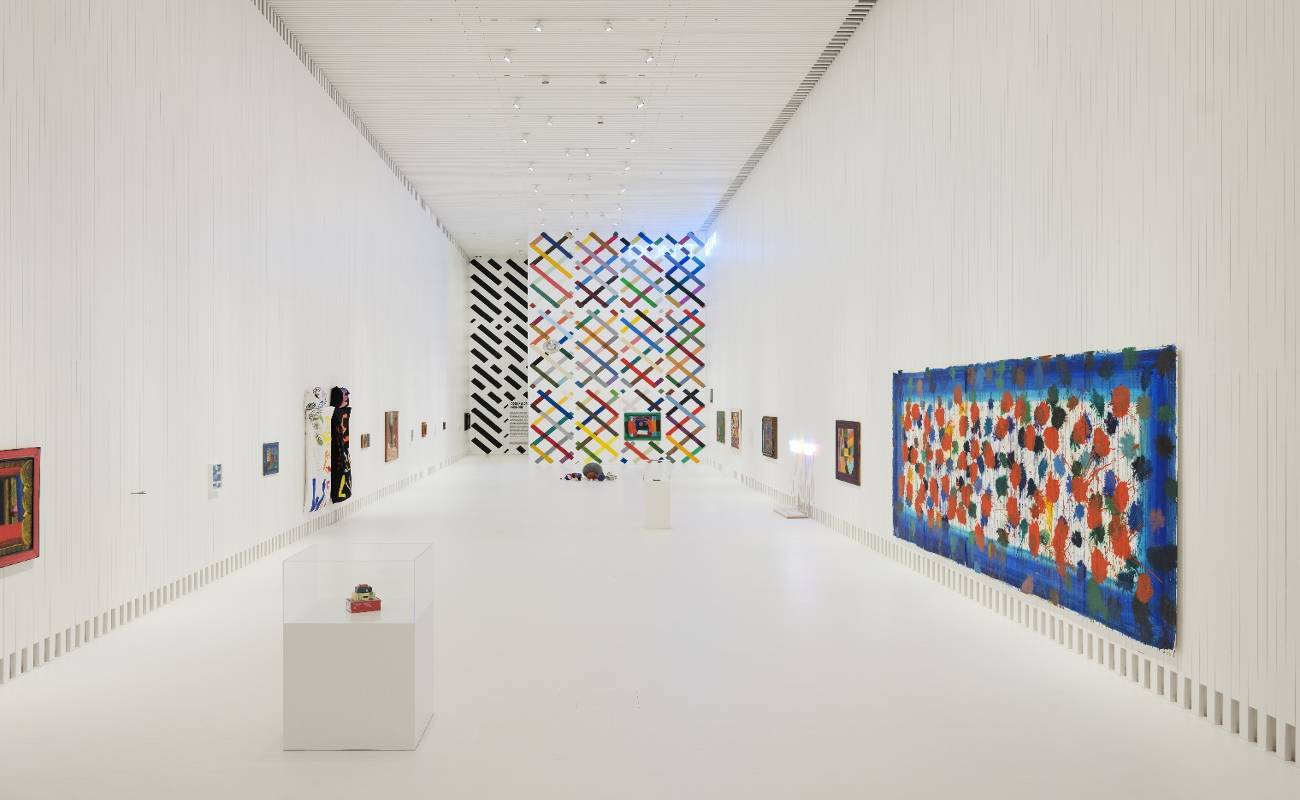 © Hodgkin and Creed – Inside Out Exhibition | Image by Einar Aslaksen 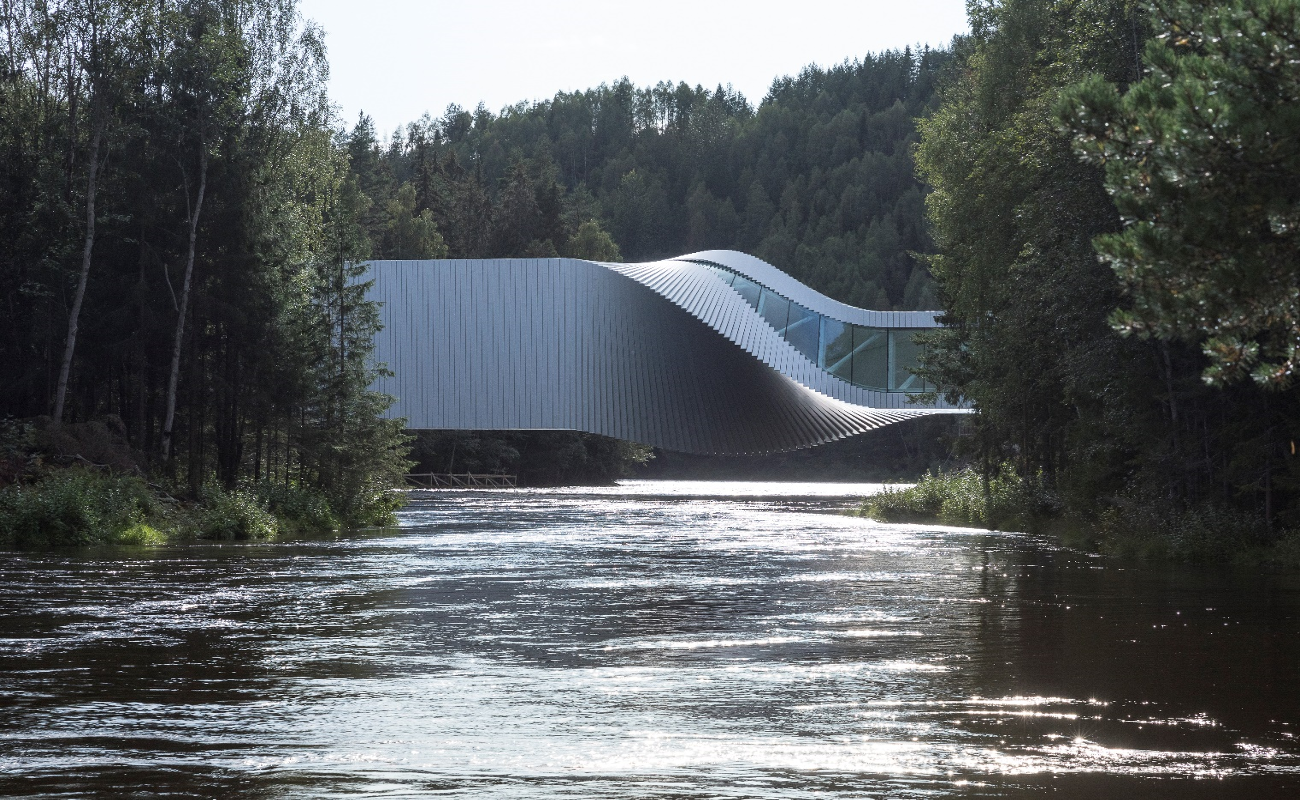 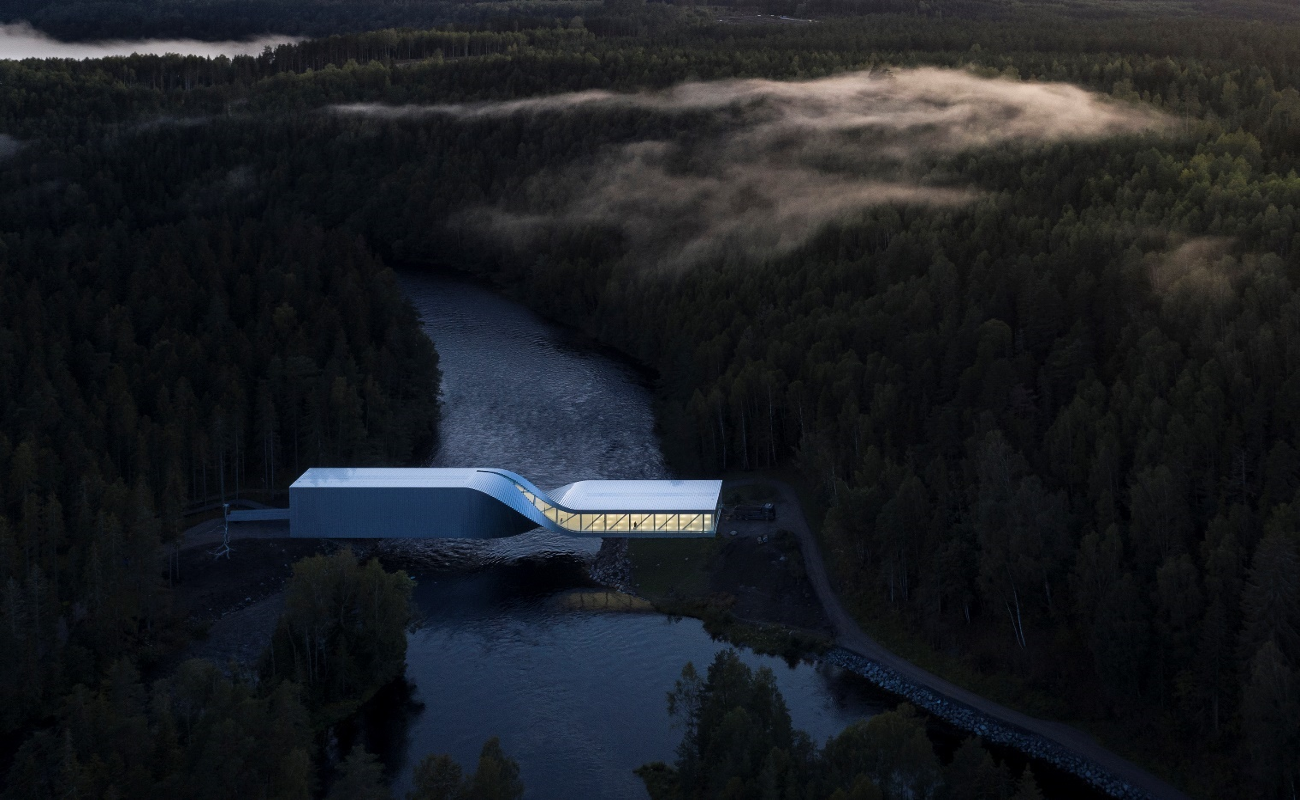 Is it a bridge? Is it a museum? Is it quite twisted? Yes, yes and yes: The Twist by BIG is all this and more. But above all it is a cool piece.

One thing should be clear by now: Where the Bjarke Ingels Group (BIG) appears, it never gets boring. Every single project of the Danish office has been both unique and eye-catching. This applies to residential buildings as well as power plants or cultural buildings. We have already reported on an atypical skyscraper in New York, a hybrid of a waste incineration plant and a leisure center, and an extraordinary museum. In September, BIG celebrated the opening of its first project in Norway. Once again, this is extraordinary as usual.

The first thing that stands out about The Twist is its eponymous form. A long, flat cuboid rests at one end on the broad side, but then turns in the middle, so that it ends up lying on the short side at the other end. So far, so twisted. The second special feature: the building towers 60 meters above the Randselva River as a bridge. The rotation proves to be a clever means of compensating for the difference in height between the two banks - i.e. upright on the flat bank and flat on the high bank. The third special feature: The Twist is not just a bridge, but a museum.

Half bridge, half museum

The sculptural structure is located in Jevnaker, aptly enough in Kistefos Sculpture Park, Northern Europe's largest sculpture park, where it acts as a bridge, completing the cultural path through the area in the form of a circular walk and at the same time expanding the indoor exhibition area. The Twist's double-curved geometry consists primarily of 40-centimeter wide aluminum panels arranged like a stack of books with slightly offset books, creating a fan-like movement. The same principle is followed by white-painted spruce slats, which internally cover the floors, walls and ceiling. For visitors, this gives the impression of a camera shutter when they pass through The Twist.

Also part of the architecture is a spectacular play of openness and secrecy. The horizontally oriented northern end has room-high panoramic glazing that offers views of a historic pulp mill and the Randselva. Towards the middle, this window turns upwards and forms a skylight that tapers towards the south until it completely disappears on the vertically oriented south side. In this way, The Twist offers three different parts of the building with different light qualities, which benefit a flexible exhibition design.

By the way, the "Twist" idea from BIG is not entirely new. At the OMNITURM in Frankfurt am Main, for example, the architects' office around star architect Bjarke Ingels already knew how to create spatial features through similar shifts. Nevertheless, the buildings never get boring. BIG simply has the knack.