Be it a snail shell or a cube: the 10 craziest buildings in the world

There are buildings which cost hundreds of millions or even a few billions. Then there are buildings which extend up into the clouds and are taller than any normal high-rise. And others are extraordinary on account of their unusual design and their appearance. Why keep with straight and clear lines, when you can do something else instead? Why have the boring and monochrome if you can build colourful and eccentric? This is what the architects of the following 10 buildings also thought:

In the Netherlands, in Leiden, to be precise, there is a building which looks like a human being. There is an interactive museum behind or inside the 35-metre tall human body. And this is quite apt for the building construction: the museum invites you on a unique journey through the human body.

On a tour to find out how our bodies actually work, which organs interact how and what we can do to ensure our bodies stay healthy. Gigantic reproductions of bones and organs through to the brain try to make the human body understandable in a playful way. 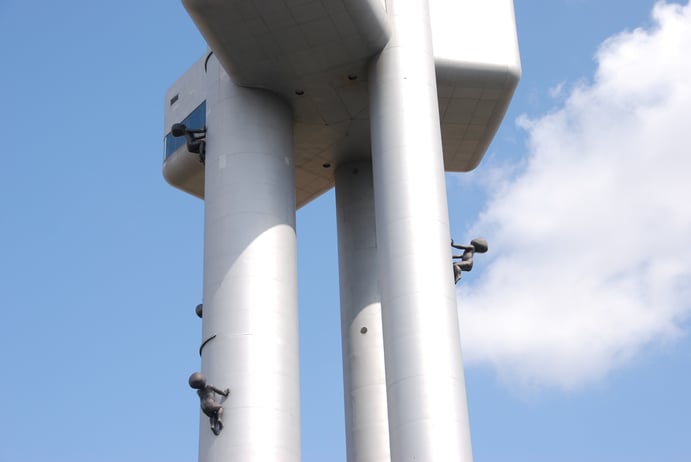 The Prague television tower at 216 metres tall and its antenna mast would be nothing special. The tower has a restaurant at a height of 63 metres and a glass viewing platform at 93 metres. Architect Václav Aulický consciously wanted to make a contrast with the historical buildings in the centre of Prague. And he has succeeded in doing so. The television tower was opened in 1992 after 7 years of construction.

All appears to be quite an ordinary television tower to that point. Save for one minor detail. Toddlers! Czech sculptor David Cerný affixed in the year 2000 stylized sculptures of crawling babies on the columns of the tower. At night the columns also radiate in the Czech national colours white, red and blue. 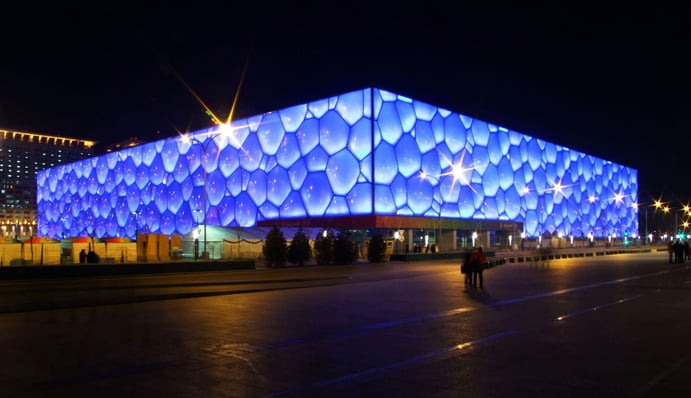 The National Swimming Centre in Beijing, also known as the Water Cube, was the setting for the swimming, springboard and high diving, and synchronized swimming events at the Summer Olympics in 2008 in the Chinese capital. There is an ice rink for figure skating, a sports hall, a cinema and various clubs on an area 70,000 square metres in total. Two Australian companies designed the competition site with Chinese partners. They already designed the water sports centre for the 2000 Summer Olympics in Sydney.

The lightweight construction consists of a series of irregular honeycombs which are reminiscent of the structure of soapsuds. The individual honeycombs were fitted with over 3,500 foil elements onto which videos can be projected. The shell of the swimming centre is not only for media purposes but for passive use of solar irradiation. 90 percent of the solar energy collected can be used for heating the pool and the interior rooms. 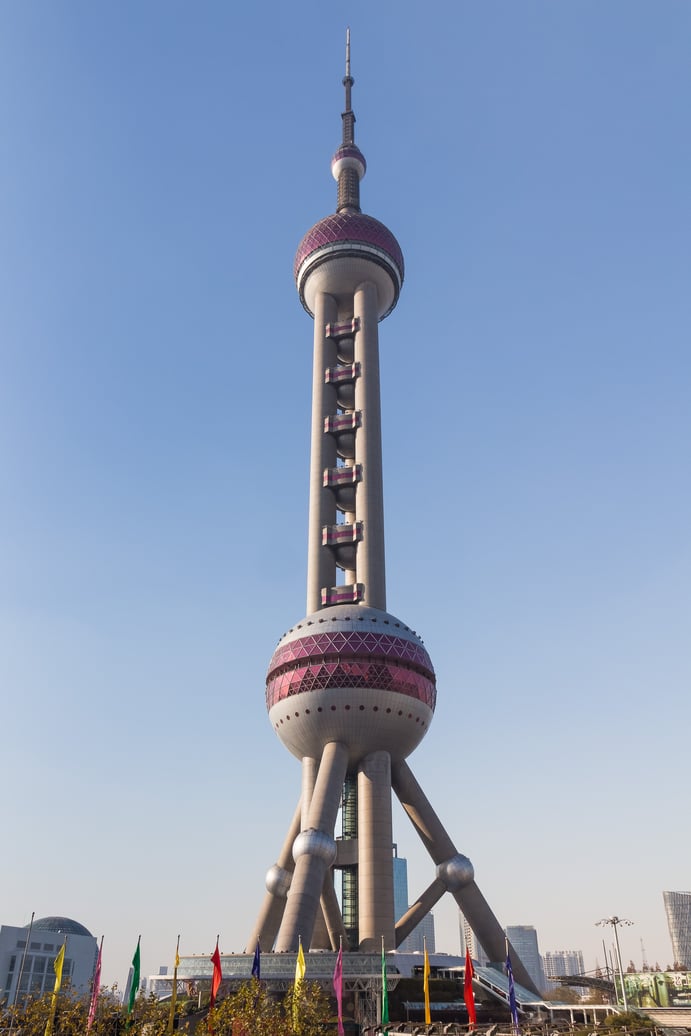 The television tower in Shanghai is one of the tallest television towers in the world at 468 metres. The tower includes a hotel, a museum, a restaurant and a disco, amongst other things. Thanks to its unique construction of eleven different size spheres at various heights, it is the city’s most famous landmark.

The tower was inaugurated in 1995 after three years of construction. Since then it has attracted several million visitors every year. The design of the tower harks back to a poem by Bai Juyi, a Chinese poet. His poem is about the sound of a pipa, a four-stringed Chinese musical instrument, belonging to the plucked category of instruments, evocative of falling pearls on a jade dish.

The Museum for Modern Art in New York City was designed by architect Frank Lloyd Wright. In 1943 he was commissioned by Solomon R. Guggenheim (industrialist and philanthropist) and Hilla von Rebay (artist, art collector and patron) to build a museum building. Frank Lloyd Wright produced more than 700 sketches. Because of the war and inflation, and some blockades by the building authorities, the project was not realized until between 1956 and 1959.

"Outstanding" architecture can also be found in nature.
That shows the following example in Bietingen-Bissingen.

The rotunda is the main feature of the building. Like a kind of snail shell the building spirals upwards. Here, Wright combined many geometric figures such as circles, ovals, curves, squares and triangles. Inside the building there is a 400-metre long ramp which spirals upwards. The roof is a glass dome which lets in a lot of sunlight and in so doing illuminates the artworks perfectly. The museum’s collection contains works of expressionism, impressionism, surrealism and post-impressionism.

The China Central Television Headquarters are the broadcasting centre of the state television of the same name. Tendering for the building called for the design to consist of two towers. German architect Ole Scheeren, who ultimately was commissioned, however designed a building in which the two towers were linked to form a single unit.

It took a while however until it was realized. The first designs were not feasible structurally. Only an external steel skeleton with diagonal struts that was attached at the site of the greatest stress intensity of the construction enabled construction of the building. Nearly 850 million euros were invested. It took seven years until the 234-metre high office complex was completed.

The opera house is the landmark of the Australian metropolis. It is also one of the most distinctive and most famous buildings of the 20th century. It was designed by Danish architect Jørn Utzon. Because it was built by a Danish architect the Danes also regard it as their cultural heritage and have included it in Denmark's cultural canon. Since 2007 it has also been added to the UNESCO World Heritage List. The 184-metre long and 118-metre wide building stands on an area of 1.8 hectares. 1,100,000 white glass ceramic tiles which were specially imported from Sweden are attached to the 67-metre high roof. 580 piles which are secured deep into the ground up to 25 metres bear the weight of the 160,000 ton structure.

In total, five theatres, studios, a cinema, several dressing rooms and bars and restaurants are located in the opera house. In order to guarantee the power supply in the entire building 645 kilometres of electric cables were laid. The budget was not actually supposed to exceed 7 million dollars for construction. Architect Jørn Utzon did not manage this however. 80 million dollar was the cost and construction work took twice as long to complete. Unsurprisingly, after all before construction work started all cost analyses and technical problems were not resolved, meaning that a concrete calculation of costs and planning of time to build was impossible.

The rising building costs, and artistic differences led to a dispute between the government, prime minister and architect Jørn Utzon. His funds for construction were halted as a result. A group of young Australian architects was finally commissioned to complete the interior rooms. This cost saving also affected the building unfortunately. Large areas of the interior and the acoustics came under criticism. On 20 October 1973 the opera house was officially inaugurated by Queen Elisabeth II.

The Museum for Modern Art in Bilbao, Spain was designed by Frank O. Gehry and is famous in particular for its deconstructionist building style. Broken geometries, angled levels and tilted rooms are characteristic features of the building. Many see in the building budding twigs and roots breaking up the earth. For others it is merely a sculpture which manages to connect organic forms with the cool materials.

The museum covers 24,000 square metres, 11,000 being purely exhibition space. Frank Gehry’s design of the Guggenheim Museums was a vanguard in work with architectural computer simulations. With the aid of highly developed simulation software which until that time was only used in aerospace, it was possible to plan in advance the complex building to optimum effect. 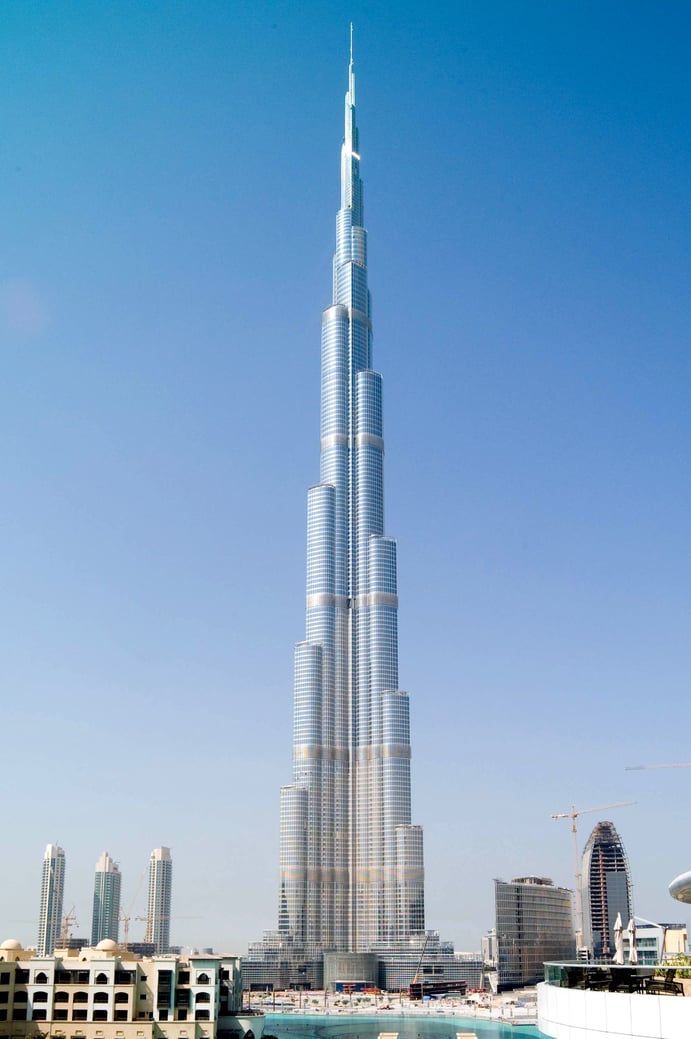 At 828 metres the Burj Khalifa is the tallest skyscraper in the world. Three times as tall as the Eiffel Tower and nearly twice as tall as the Empire State Building. The weight of the concrete used corresponds to approximately 100,000 elephants. The aluminium used is the same as five A380 planes.

It was designed by American architect Adrian Smith. The construction used 330,000 cubic metres of concrete and steel. In order to get the concrete to this height it was pumped vertically upwards in pipes using massive compressors. Because of the high temperatures in Dubai the concrete could only be pumped and cast at night. However, even the cooler temperatures at night were tough for the concrete and ice cubes had to be added in order to ensure the fluidity of the concrete.

Several thousand tons of steel are recycled steel from the demolished Palace of the Republic in Berlin. A mighty 26,000 glass plates, or sheets, were individually cut in order to design the outside of the building. At its peak, up to 12,000 employees were engaged in the construction work. Noteworthy fact: the tip of the Burj Khalifa can even be seen from a distance of 95 kilometres.

The Cube Houses in Rotterdam are known all over the world for their extraordinary design. They were designed by Dutch architect Piet Blom. His principle in the design was very simple: he wanted to construct a village in the city. And this village was to be anything other than boring. No sooner said than done! Tilt a conventional, cube shape house 45 degrees, and rest it upon a hexagon-shaped pylon. And the Cube House is done.

Each individual house represents a tree: all the houses together form a forest. The whole structure comprises 38 cubic houses, three mega-cubes, a high-rise and an apartment block. All 38 homes are connected. An entire 100 square metres are available to the residents, spread over three levels. But bear in mind the house does not have any straight walls!

Anyone who would like to take a look in the tilted structure can do just that. One owner opens his home up to the public. Moreover, there is a hostel in one of the mega-cubes. If you are lucky there might even be a house for sale. Approximate price: 175,000 euros.