Urban freeways and expressways plow through the city quarter, intersect shopping areas, split business districts. They cause traffic jams, noise and air pollution in inner cities around the world. Residents would often prefer to see automotive arterial roads completely removed from the cityscape. However, the infrastructural needs of today's car companies usually do not allow for this. Two options remain: making the necessary evils into an integral component for measures to improve the quality of life in our metropolises, or making an alternative move. In both cases, sustainable urban planning is required. We will reveal to you what visionary concepts are provided, or already implemented, for Los Angeles, London and Xiamen, China. 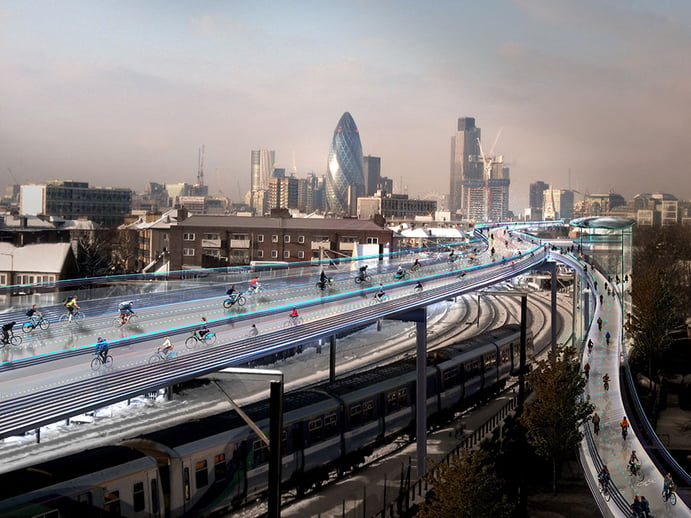 The sky above L.A.

Los Angeles is a giant. Freeway 101 and freeway 110 intersect in the heart of the Californian metropolis. In doing so, they separate four quadrants, which live side-by-side spatially and socio-culturally separated from each other. Downtown, Chinatown, Echo Park and Temple Beaudry. In between are 11 hectares of inner city no man's land. A visionary project for sustainable urban development is intended to ensure that everything that belongs together, grows together: the "Skyvillage for Los Angeles“. The architect Ziwei Song won an "honorable mention" with this project in 2014 as an award at the annual skyscraper competition held by the US architectural magazine eVolo. The sky city makes the fallow land into an architectural organism above the highway interchange. It not only combines the four city districts, but also promotes cultural exchange, social interaction and community. The huge filter towers equipped with plants, which the "Skyvillage" bears like stilts, at the same time clean the air of exhaust gases, which the traffic below produces.

Vertical Gardens - Fresh air for the office: See how Microsoft Austria designed its headquarter in Vienna in a new way.

Cycling at great heights in Xiamen

Futuristic sky cities, free of cars, noise and exhaust fumes, are a nice vision. The concepts proverbially defy the problems of living together in major cities. Visionary and at the same time reality is the "Bicycle Skyway,", a spectacular cycling path at great heightson which residents of the southeast China coast metropolis of Xiamen escape traffic on their daily trek through the city. The nearly five-meter wide cycling skyway runs for 7.6 km over the car traffic and under the fast route for buses through the city. Xiamen thus has the longest raised cycling path in the world. Cyclists can enter or exit at eleven points – including at various subway station and shopping centers. The permitted maximum speed on the symbolically green path: 15 km/h. Thanks to sustainable urban development, the residents make their way through the inner city here free of traffic and at the same time are doing something to improve the air quality.

With the "Bicycle Skyway" in Xiamen, architects have found a unique solution for China – the elevated cycling path is therefore a model for major cities around the world.

The traffic situation in London is also dramatic. If the air quality for Londoners is to be improved and a new generation of cyclists is to be put in the saddle, then cycling must be a safe and above all attractive option – of this Sir Norman Foster is convinced. The British star architect has launched an ambitious project with the "SkyCycle,:"  The 220 km long cycling path with over 200 entries and exits is to follow the rail network of the London local transport network and be easily usable for over six million people. For the time being, however, its sustainable city planning is meeting the fate of many similarly ambitious projects: It remains a vision.

Los Angeles, Xiamen and London show: Sustainable city planning is part of the future – and it is already the present in many places. Planning at heights opens up new fascinating perspectives in particular.