The relationship between architects and engineers is not always expressed in mutual appreciation. Architects are considered the creative ones who want to create masterpieces and push the boundaries of the physical feasible. In contrast to this, civil engineers are sometimes seen as "killjoys" who reduce the complex designs, because the design removes structural elements or is much too expensive.

But apart from these impressions, the two professional images complement each other perfectly and they can build on each other. Extraordinary structures of structural engineering have been created thanks to their cooperation. We will present three of these projects to you in this article. 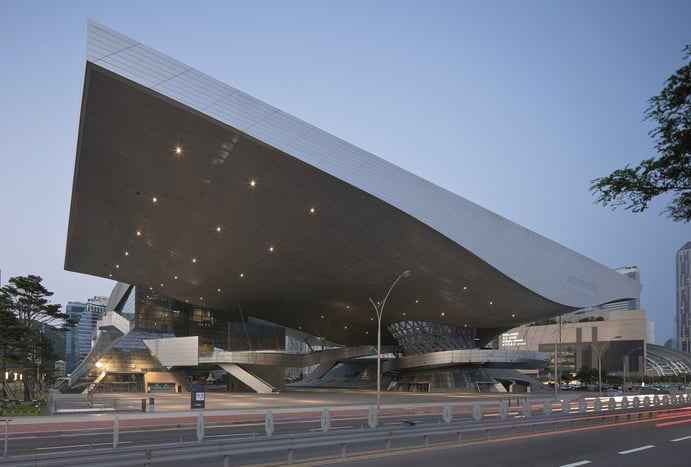 For this cultural event center in the city of Busan in South Korea, the architects Coop Himmelb(l)au cooperated together with the engineering office Bollinger + Grohmann. The multi-functional structure combines movie theaters, restaurants, a public plaza as well as an open-air theater with 4,000 seats under its huge sun roof.  The basic idea of the design was to create an overlap between open and closed as well as private and public spaces. Based on Oscar Niemeyer and Le Corbusier, Coop Himmelb(l)au designed a pillar-free roof as an architectural element. Its largest part spans an area of 60 x 120 meters and extends 85 meters into the sky.

Bollinger + Grohmann were responsible for the structural framework planning (LP 3-4) of the Busan Cinema Center: double cone that at the same time serves as a symbolic landmark and entrance sculpture of the structure. It consists of a steel lattice shell, which rests on a tensioned concrete slab and that is a single vertical supporting structure. It supports the building as well as the huge roof and stiffens it – an impressive example of structural engineering.

Find out more about how much freedom and precision in modeling is possible with ALLPLAN.

The new home of the Atlanta Falcons, a team in the National Football League in the US, is located in the Mercedes-Benz stadium in Atlanta, Georgia. The structure that is currently under construction impresses with its retractable roof. It was designed by the architectural office HOK and the engineers BuroHappold. The eight large segments made of ETFE, a synthetic film that is primarily used to roof swimming pools, is reminiscent of flower petals, which generate a pinwheel effect when opening and closing.

The challenge of the structure is to create a powerful, fan-friendly stadium in an iconic design. In the process, the planners were to choose a new approach for the roof – not the typical two-member structure of stadium roofs. The future event location with 80,000 seats is characterized by a complex geometry of facades. There is a gigantic window made of a thin layer of ETFE on the eastern side of the facility that offers a great view of the city. In addition, the engineering is to meet the sustainability standards of the LEED platinum certification. This symbolic structure can only be created with the cooperation of architects and engineers.

A luxurious new residential area called Embassy Gardens has been under construction in the heart of London since 2012, which in the second phase of implementation includes the construction of 872 additional residential units. A important element caused a sensation here: the Sky Pool. It was announced as the world's first swimming pool that is completely transparent. The swimming pool at a length of 25 meters combines two of the new residential buildings on the 10th story. It spans a distance of 14 meters without any supporting structure.

The walls and bottom consist of 20 cm thick acrylic panels, which allow for a view downward from the pool as well as upward from the ground into the pool. Residents can see the London Eye as well as the House of Parliament over the edge of the pool at 35 meters above ground. HAL Architects from London are cooperating with the engineering office Arup Associates and aquarium designer Reynolds for this project. Together, they developed a concept for an inspiring environment that, in addition to the residential areas, also includes a roof bar, green outdoor facilities as well as a fitness center.

Joint use of complementary skills

These three projects are just a small part of what outstanding structures can be created when architects and engineers utilize their various skills together. Each of these occupations is characterized by special skills that can result in architectural masterpieces of structural engineering when they cooperate with each other.