Terreform ONE develops architectural and urban development concepts to save the world. One of them, the Monarch Sanctuary, serves as a refuge for an endangered butterfly.

Houses have always had the primary function of providing protection for people - from the weather, animals or even other people. For the animal world, however, humans have long been the greatest danger of all. An insatiable hunger for resources, an incessantly growing and spreading world population and the associated anthropogenic climate change are the main causes for a catastrophic extinction of species. Terreform ONE, an architecture and urban planning based non-profit consulting group from New York, is fighting against this alarming trend. Its mission: Resilience through innovative construction, transportation, infrastructure, water, food, waste processing, air quality and energy. A curious example of this work: the Monarch Sanctuary in New York. 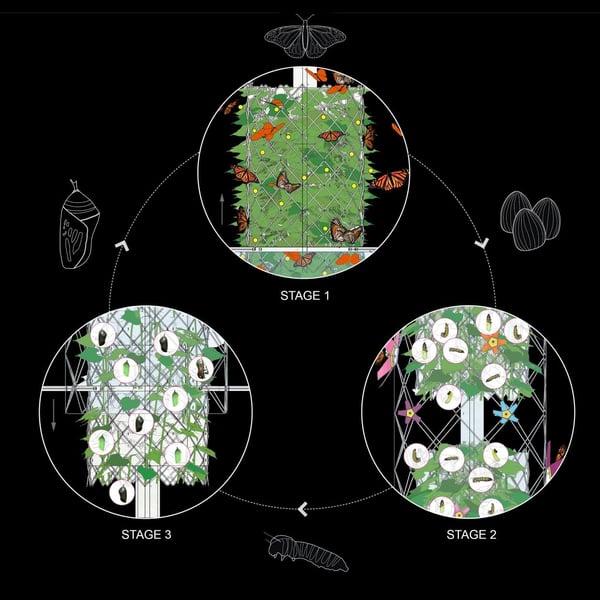 The protagonists of this particular building design are not some fleeting kings, but the Monarch butterfly, native to New York. The permanent population of this butterfly has declined by 90 percent in the metropolis in the last 20 years. The Monarch Sanctuary is to serve as a refuge for it so that its population can recover. However, an eight-story building for insects alone, which pay no rent, would hardly be feasible in Lower Manhattan. The small high-rise therefore "also" functions as an office and commercial building. However, the focus is on the new habitat for the moths in the facade, roof and atrium.

The refuge for butterflies is basically divided into two areas. One is a breeding ground and supply area in the form of silk plants and nectar flowers on the roof, the terrace and the rear facade for the different stages of metamorphosis. The other consists of an atrium and the street-side double facade, which together form a semi-open vertical meadow where wild colonies can settle.

The double skin facade is the real highlight of the building. A diamond-shaped supporting structure made of carbon concrete holds an outer layer of glass and an inner layer of ETFE cushions. The space between the facades is transformed into a terrarium, which is intended to ensure an optimal climate for the butterflies all year round. To achieve this, hydrogel bubbles on the ETFE cushions provide the right humidity, while algae bags in turn purify air and wastewater.

Not ready for construction, but a prototype

The butterfly sanctuary is not yet ready for construction. Among other things, a sophisticated irrigation and drainage system for the plants and algae is still missing, as well as a way to monitor the sensitive biotope around the clock. Terreform will still have to develop solutions for this. After all, there is already a prototype of the facade, which was produced in cooperation with a large industrial partner. For this purpose, silicone molds were generated by 3D printing as the basis for the supporting structure, which are filled with particularly flowable mortar. 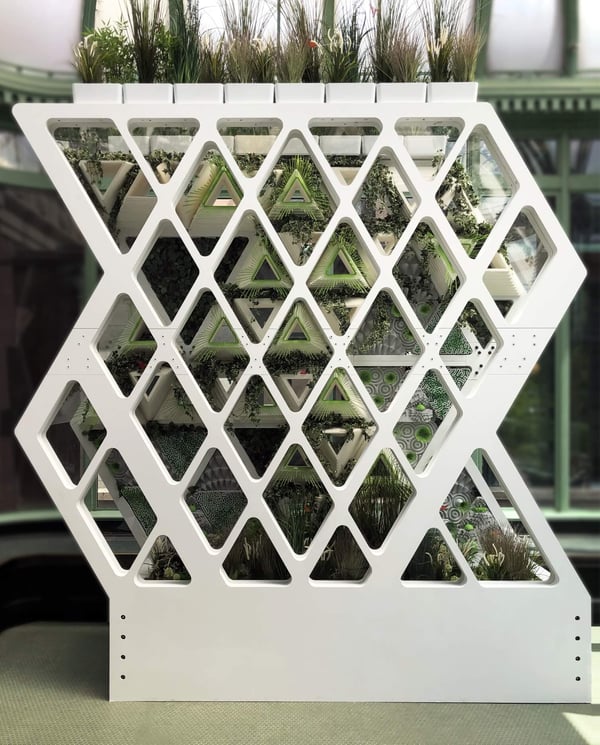 The fact that no species can really save a building like this from extinction is clear to even the most dedicated architects and urban planners. But at least it would serve as a reminder that we are not (yet) alone in this world.