Pedestrian bridges have it pretty easy compared to other crossings. After all, people are not as heavy as motor vehicles or trains. And since pedestrian bridges only have to bear small loads, architects have very different opportunities. These are used in a variety of ways, whether in formal design or in mechanical functions. The results are often amazing.

The Media City Footbridge near Manchester is one example of such amazing built effortlessness. This connects the main complex of the MediaCityUK in Salford (where it gets its name) to the satellite buildings on the Stretford side. The silhouette of the 100-meter structure is so narrow that it would very easily be overlooked at a distance if not for the fan-like pylon, which announces the cable-stayed bridge from afar. Its design as a swing bridge is even more amazing than the incredible fineness of this crossing. The pivot point is located very close to the shore, which means most of the bridge swings across the river Irwell in a great sweeping motion.

See from the customer's point of view how Allplan Engineering was used in different challenging customer projects and contributed tremendously to their success.

The delicate eye-catcher by Wilckinson Eyre from 2011 is not the only bridge in the UK that plays with its lightness. In London, there are two pedestrian bridges in close proximity to each other that make use of their light weight to achieve a certain mechanical show effect. The first of them is the Rolling Bridge at the Paddington Basin designed by Heatherwick Studio in 2004. The 12-meter long crossing consists of eight triangular movable segments. These make it possible for the bridge to curl up like a roly poly, clearing access to the narrow canal for boats. The resulting octagon is a little reminiscent a hamster wheel. 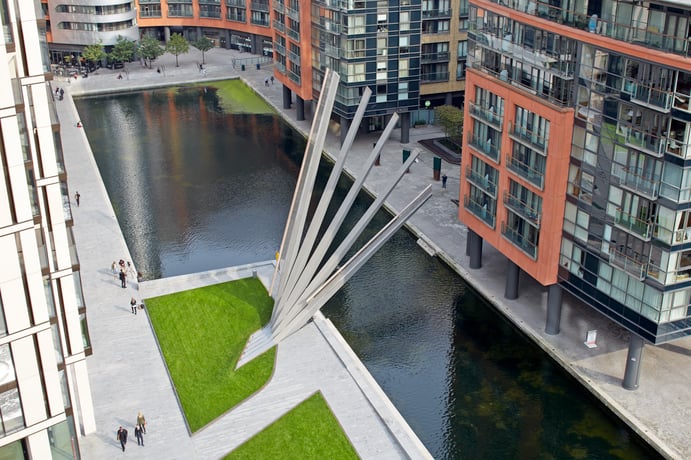 Ten years later, the Rolling Bridge received a similarly cute and unique sister just around the corner. The Merchant Square Footbridge by Knight Architects is just 200 meters away. Locally people also call it the "Fan Bridge". As with the Rolling Bridge, it is a nickname that refers to the way it clears the waterway. When the bridge opens, individual elements gradually and elegantly fold up like a fan.

The Ravelijn Bridge in the Dutch city of Bergen op Zoom does not clear the way for boats. It imitates them. The wooden structure was created by RO&AD Architecten in 2014 to connect a fortress island with the city center and also to create an additional escape route from the island in addition to a bridge that already existed. The bridge floats on the water and meanders the 80 meter route that supply boats once took to the fortress. The bridge's convex shape guides it as close to the surface of the water as possible so that there is no reflection. In the winter, it can also simply be put to the side for ice skating.

All of these footbridges are one of a kinds with iconic character, which are not only "walked on with feet," but that are also viewed with astonished looks. However, the fact that too much attention can also quickly lead to an excessive load was shown last year with the Zhangjiajie Grand Canyon Bridge.