Houses from the printer

In future almost everything will be printed using 3D printers, even houses. The first completely printed prototypes already exist.

Looking at the various approaches in terms of 3D printing, in future almost everything will be printed - from clothing to food to organs. Even buildings are not excluded from this list. In fact, in the past few years there has been quite a lot of pioneering work done in this field. Since 2014, Shanghai construction firm Yingchuang Building Technology has been printing not only mass produced small bungalows from its own secret rubble/cement mixture, it has also managed to erect multi-storey buildings up to six storeys. The roofs of these houses are however still built in the conventional way. But what about printing complete buildings?

A small house that originates entirely from the 3D printer by the name of “Urban Cabin” has been located in Amsterdam since the middle of 2016. Measuring 8m², jet black, with pointed roof and surrounded by a pocket park, the small intervention makes a major contribution to enhancing the look of an industrial estate. 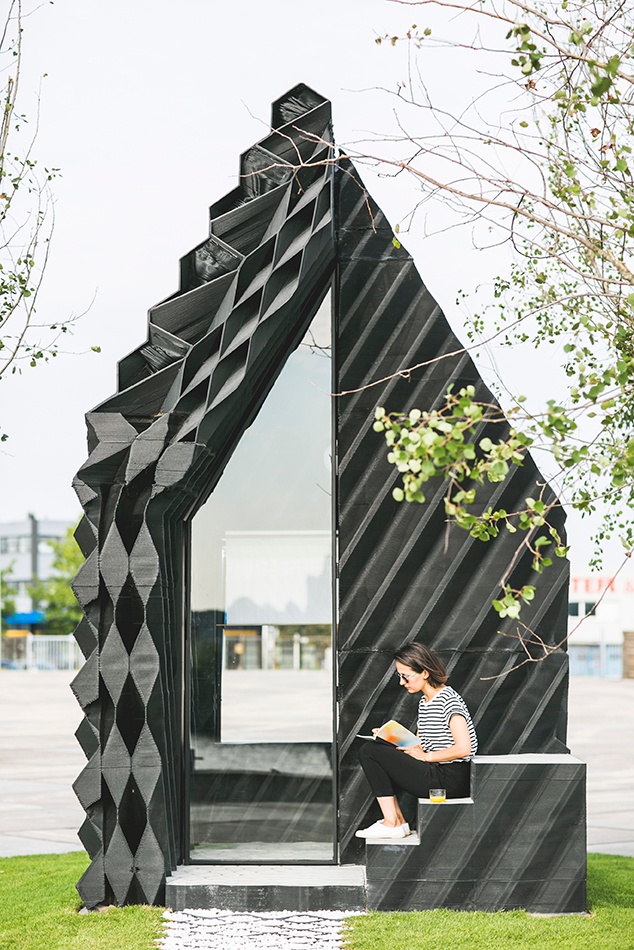 The cheerful facade made of various geometric shapes and patterns is the result of a combination of aesthetic aspects, form-optimized techniques and intelligent solutions for insulation and material use. The material itself is a linseed-based biodiesel product which is 100% recyclable. If need be, the building could be entirely pulled down and a new small house printed using the rubble.

Printing with the “room maker”

The Urban Cabin was designed and printed by Amsterdam agency DUS Architects. Filled with enthusiasm for their desk top 3D printer the architects did not want to leave it at printing models. So, they approached Ultimaker, the manufacturer of the office printer, and jointly developed the “KamerMaker” (or “room maker” in English). This 6-metre tall printer can print objects with a diameter of up to 2 metres and a height of 3.5 metres. An upright shipping container serves as a housing. 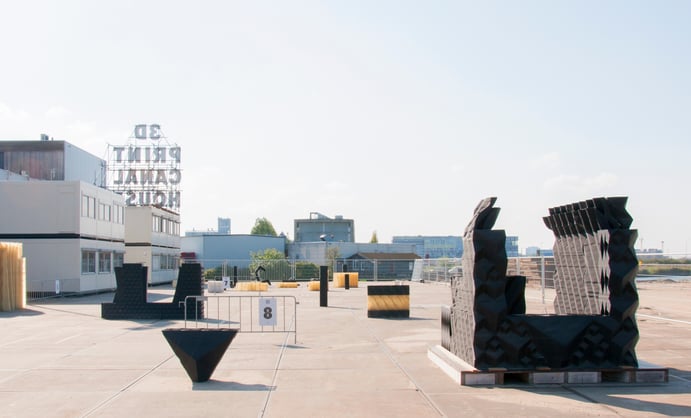 DUS Architects do not stop at the small Urban Cabin, which provides just enough space for a bed or a couch. Along with several international partners, since 2014 they have been developing the world’s first completely printed canal house: the “3D Print Canal House”. For this purpose, the KamerMaker will steadily print individual segments which are subsequently put together like pieces of Lego. The project is freely accessible to the public and has already been visited by, amongst others, Barack Obama.

Pioneer with pioneering aid: 3D print from the Middle East

Whilst they are still putting the finishing touches to a “proper” house in Amsterdam, in Dubai they are already one step ahead. In May 2016 the first 3D printed office was completed. Similar to the 3D Print Canal House individual segments were printed first and then put together, although the 36 x 12 x 6 metre large 3D printer could have easily printed an entire house. Incidentally, it was built by none other than said Yingchuang Building Technology from Shanghai.

The approximately 250m² large snow white office complex is composed of several volumes which formally are reminiscent of elegantly curved tube screens. Like the houses printed in China the material is a mixture of cement and a secret special ingredient. At 17 printing days and two further days for assembly building costs totalled around 140,000 US Dollars – less than half of the costs for a building of this size manufactured in a conventional way. The construction itself required 18 members of staff: one for monitoring the printer, seven for the assembly and a further ten for installing the technology and the various connections.

Learn more about energetic sustainability and efficiency in the implementation of the biggest office building in Baden-Württemberg using passive building standards.

The office designed by Gensler is a symbol for Dubai’s efforts to play a leading role in the technology sector in general and in 3D printing in particular. The complete interior was printed here too. This fully printed building will not be the last in the city state; after all, Dubai has set itself the goal of creating a district of all buildings from the printer by 2030. With regard to such ambitions the office fittingly is home to the Dubai Future Foundation – a state foundation for promoting innovative solutions for the challenges of the 21st century.

The fully printed buildings are just the beginning and an impressive one at that. In particular, the office in Dubai shows how far technology has already advanced. It indicates that industrial production of houses in large quantities is likely not too far away. The potential of 3D printing for the construction industry is vast after all, be it in order to build really quickly, to save costs or even simply to realize new forms which were previously not possible.

Previous post: The significance of Brexit for BIM in Europe
Next post: Be it a snail shell or a cube: the 10 craziest buildings in the world