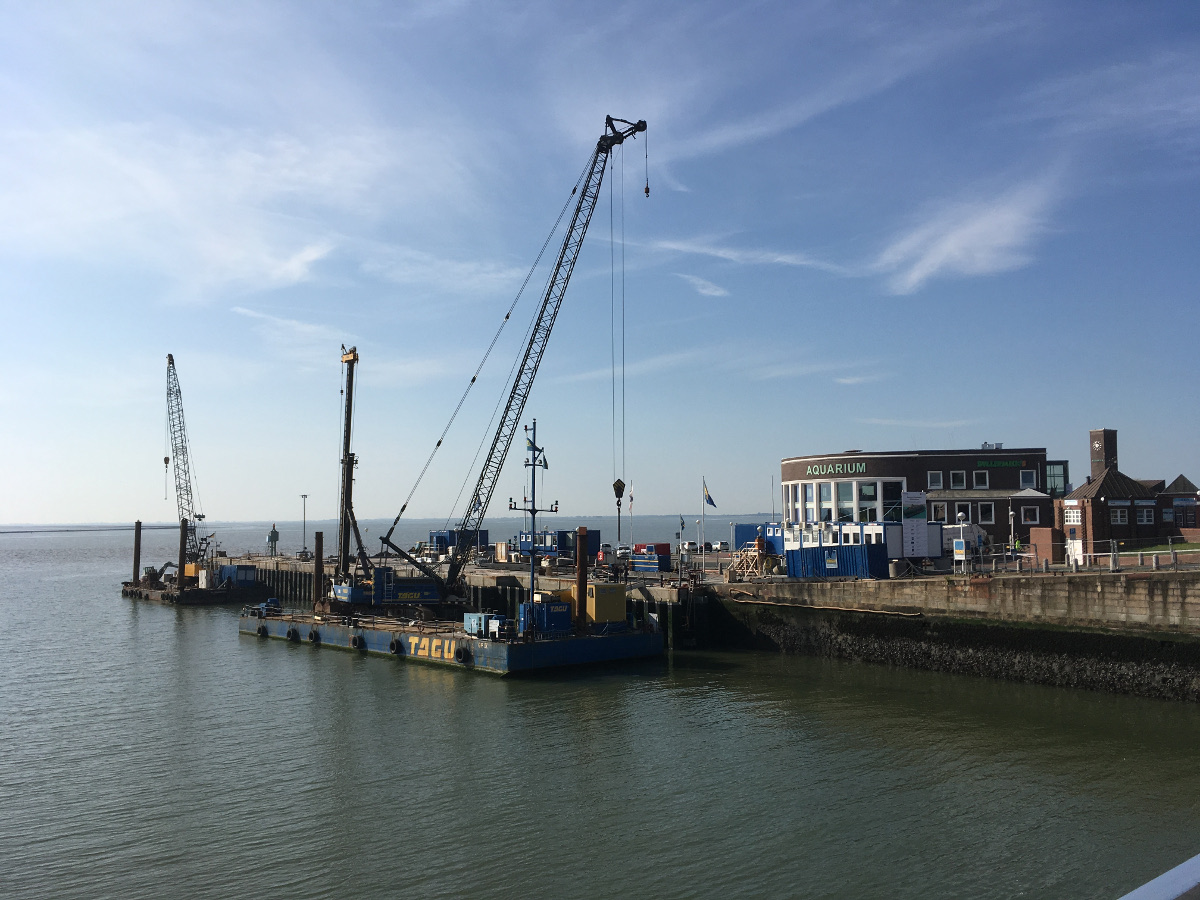 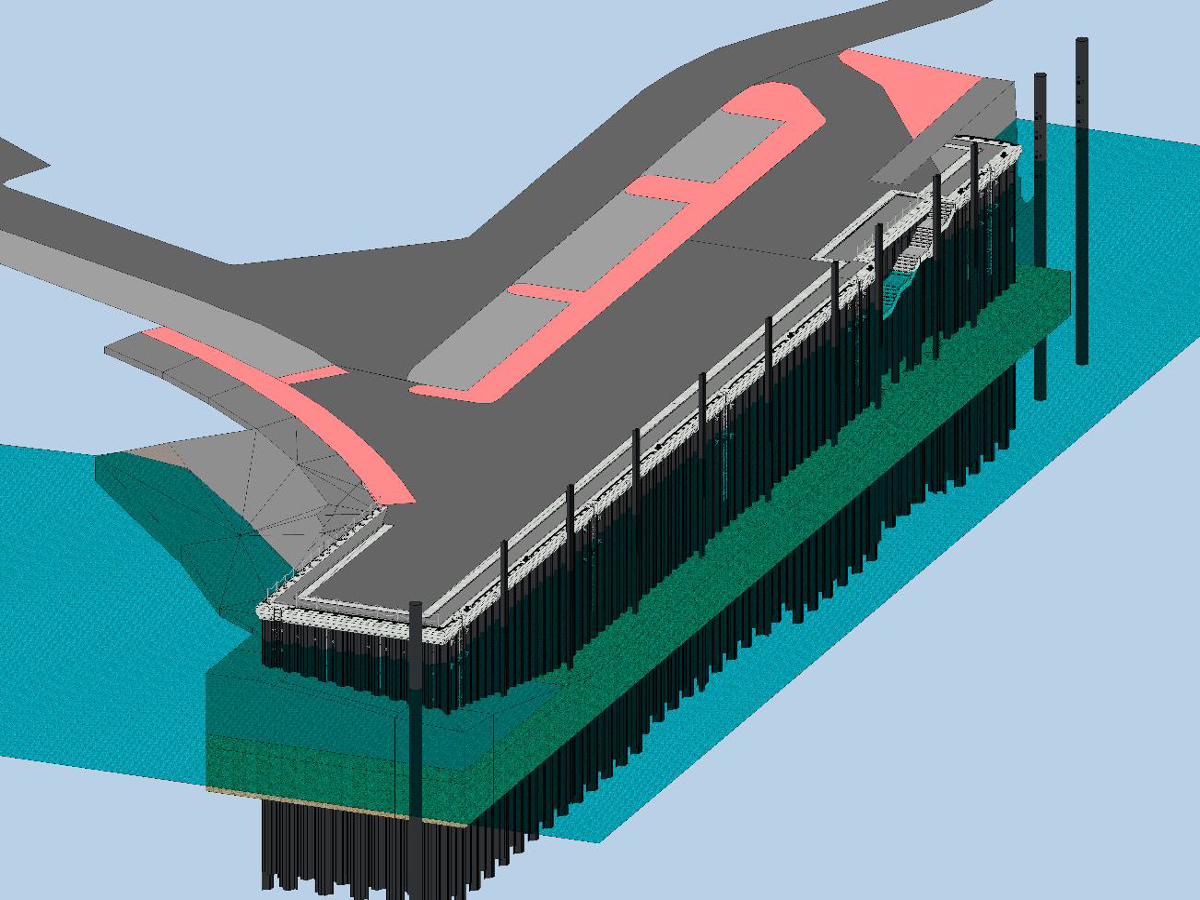 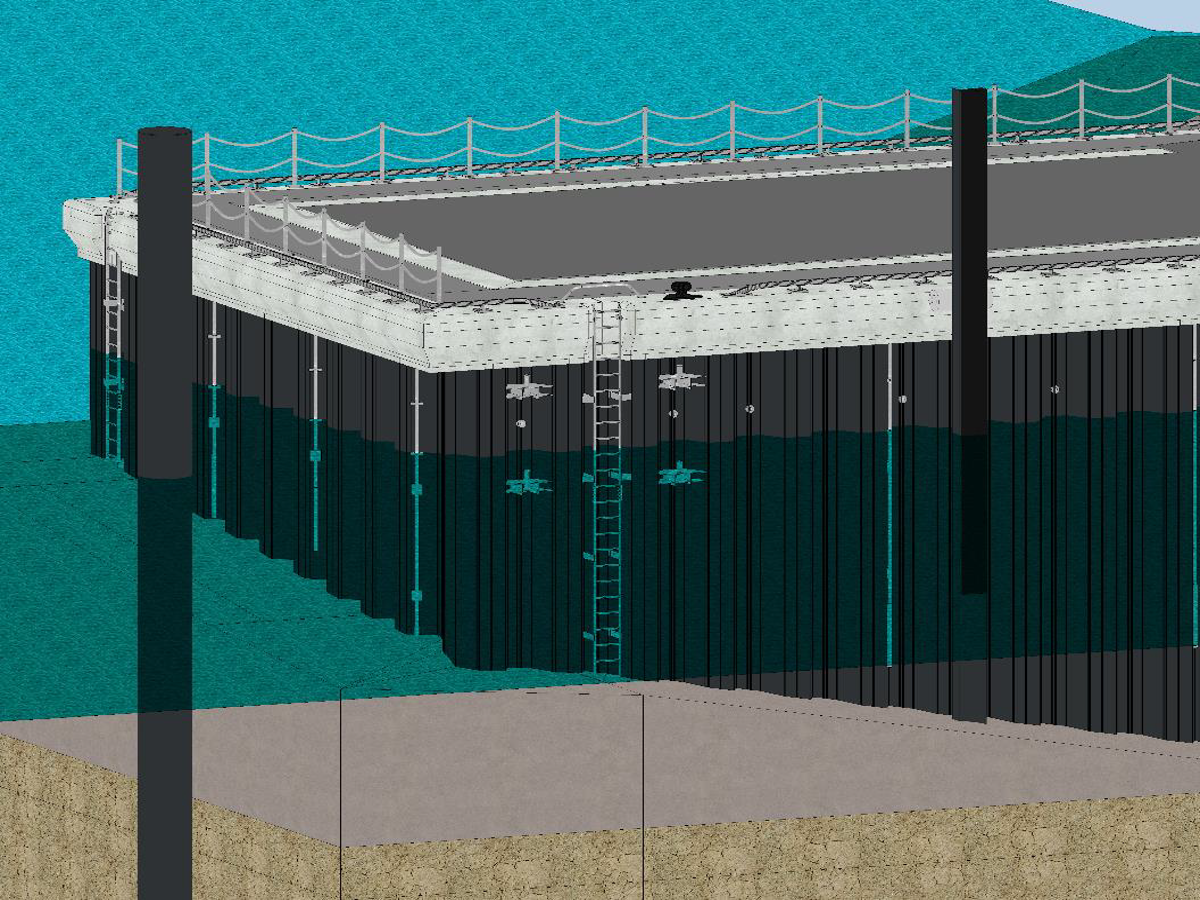 Built between 1877 and 1886, Helgolandkai served for a long time as the "first entry" for Wilhelmshaven's shipping traffic. Since then, the artificial bank, with a usable length of about 100 metres, has seen many a construction project. The structure was also continuously inspected, with the main inspections most recently showing that the quay facilities can now only be used to a limited extent. This is now changing. Since the beginning of 2019, a comprehensive rehabilitation project of the 130-year-old structure – has been awarded to Tiefbau GmbH Unterweser, a company of the LUDWIG FREYTAG Group. Unlike the previous rehabilitation work, however, this time it is a milestone in the history of German port construction: The owner and operator, Niedersachsen Ports (NPorts), has chosen the construction project as its first pilot project for Building Information Modeling (BIM).

WK Consult (WKC) was commissioned for the project planning and structural design. Engineers from the BIM department of LUDWIG FREYTAG, in cooperation with the civil engineering team of Eriksen und Partner GmbH, from Oldenburg, were responsible for the implementation planning and technical processing. The project planning was supported by the BIM management of albert.ing.

The rehabilitation of the quay comprises a technically demanding package of measures: a new wave sheet pile wall is placed in front of the existing sheet pile wall, anchored, and then backfilled. The head of the quay has to be erected and a staircase of the sheet pile wall has to be presented. In addition, fixed ladders, crosses, head bollards as well as mooring and mooring dolphins have to be installed.

As the conventional planning was almost completed at this point in time, the BIM processes were subsequently simulated. All in all, this resulted in a number of new tasks for object planning. The object-oriented 3D model also served as a pilot for model-based communication with NPorts via a common open BIM platform (Common Data Environment). Performance items and quantity calculations were attributed in the model and additionally linked to tendering software.

Furthermore, WKC supplied the contractor information requirements for the construction tender and the integration into the conventional performance specification. Based on the design model, the BIM model authors at LUDWIG FREYTAG created an execution model (including 2D plan derivation) with a significantly higher level of detail (LOD 400 instead of LOD 200), also with the help of Allplan Engineering, which is maintained and enhanced up to the transfer model (LOD 600).

ALLPLAN software proved to be a powerful and reliable tool for the designers. The basic components in particular could be modelled quickly and easily. WKC created a total of 14 specialist models. The reason for splitting into individual specialist models was that this made both visual and rule-based model checking easier and, if changes were made to the model, only the relevant specialist model had to be re-exported and replaced.

This also applied to various testing software such as the Solibri Model Checker or the open BIM platform (CDE) implemented in the project, on which the individual specialist models were combined into coordination models by the contractor and transferred to the BIM management team on the client side. It was decided to perform the calculations exclusively directly in Allplan, which - like the derivation of 2D plans - worked perfectly.

In the course of the implementation planning, LUDWIG FREYTAG reversed the separation of the sub-models - at least partially - and restructured them: in order to better assign the demolition components to the existing components, the existing and demolition models were combined. In addition, the engineers took advantage of a function in Allplan that is not normally used in hydro-engineering. They simply used the program's flexible floor assignment to divide the overall model into sub models. This enabled them to work in a well-structured manner and to achieve a high-performance IFC export, as all drawing files of a sub model are automatically assigned to the sub model via the floor.

Overall, the BIM pilot project Helgolandkai can already be considered a success. Christian Tiedemann, BIM designer WK Consult, said: "Thanks to Allplan, several problem areas in the model could be identified and solved that would not necessarily have been noticed in a pure 2D design for a linear structure of this type" In particular, collisions of components - especially the anchors, both among themselves and to the existing structure - could be successfully avoided. The quantity take-off was clearly more error-free and easier than in a conventional, manual way.