Gotthard Base Tunnel - The longest tunnel in the world

57 km long. Up to 2,300 meters deep. 28.2 million cubic meters of rock. The Gotthard Base Tunnel from Erstfeld to Bodio is a project of superlatives: Longer, deeper, faster. It was officially released for freight traffic on December 11, 2016. 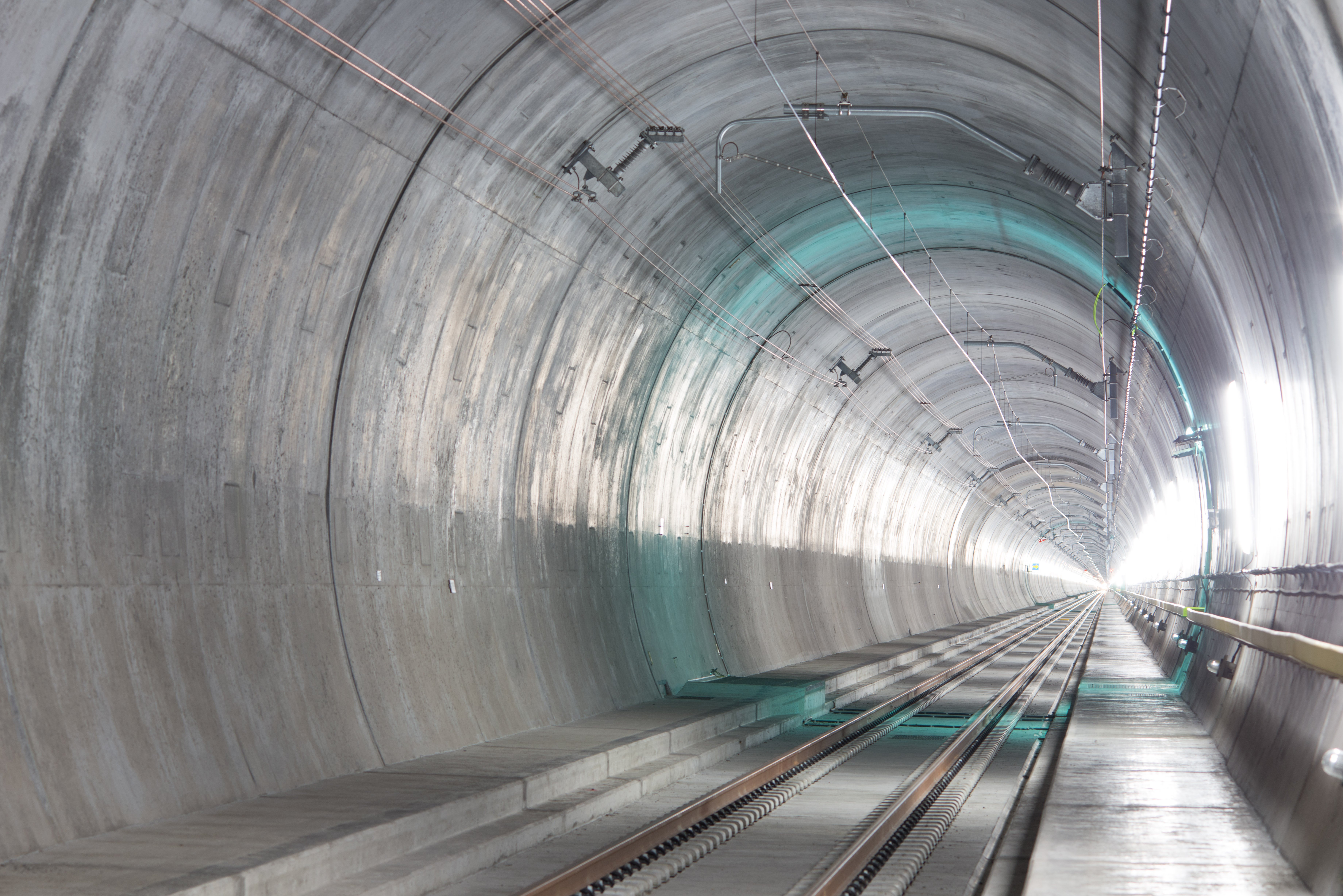 It is a sign of Swiss precision: the Gotthard Base Tunnel. It took 17 years of work until the model example of European, well, of global tunnel construction was finished. But as the saying goes: Good things come to those who wait. This is also what the Swiss thought. And this does not mean that they left themselves extra time or financial difficulties delayed the completion, as with major German projects (Stuttgart 21, the Elbphilharmonie, the Berlin Brandenburg airport).

At just under 12 billion francs, the costs are more than the actually projected total of just under 6 billion francs. Twice as expensive. 6 billion more than planned. OK, that's a big stack of money. And the mammoth project was not spared by construction delays. But the Swiss have it all under control. They were able to quickly and successfully counteract these delays. This is because there was great transparency and strict public checks by a parliamentary committee during all phases of construction.

Immense cost explosions, as in Berlin, Hamburg or Stuttgart, could therefore not occur. Sure, 6 billion francs isn't nothing, but the additional expenditures remained constant compared to the Berlin airport. Since 2008, the costs remained in the planned range and the target date of 2017 was even undercut by one year. 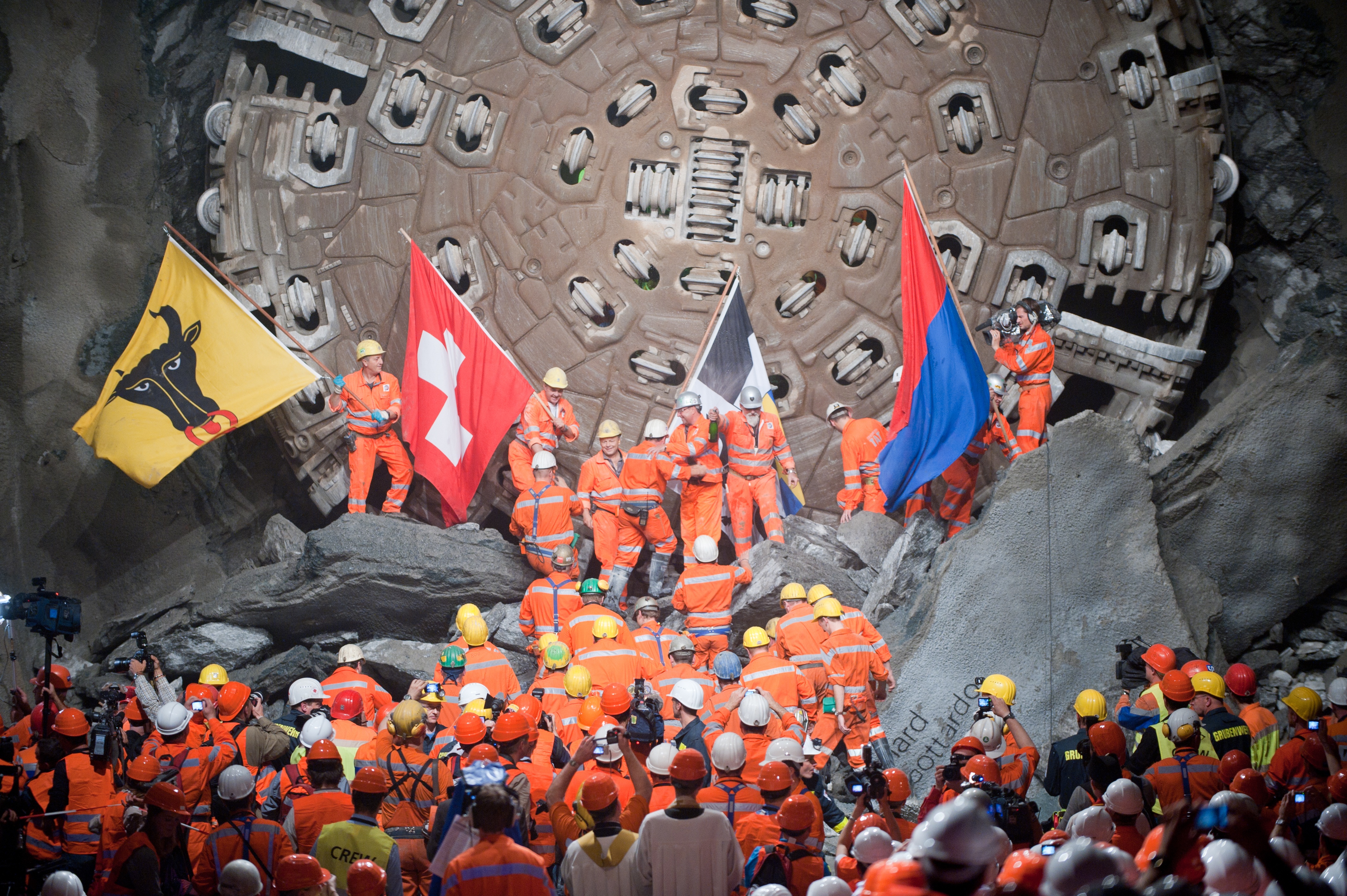 The Gotthard Base Tunnel is a tunnel structure made of two separate tubes for train traffic and an escape tube. Several cross-tunnels connect the two tubes with each other. They are each nearly 8 meters in diameter. Cross-beams are installed every 325 meters, which serve as a place of refuge in cases of emergency and as escape routes into other tubes. In total, the tubes are 152 kilometers long. 290 kilometers of rails and 380,000 sleepers were laid in the process.

At 57 kilometers, it is the longest tunnel in the world and relegates the Seikan Tunnel between the Japanese islands of Honshu and Hokkaido and the Channel Tunnel under the English Channel to second and third place. Since it runs under up to 2,300 meters of rock, it is also the deepest tunnel in the world. Since it only has minor slopes, it is called a flat trajectory. 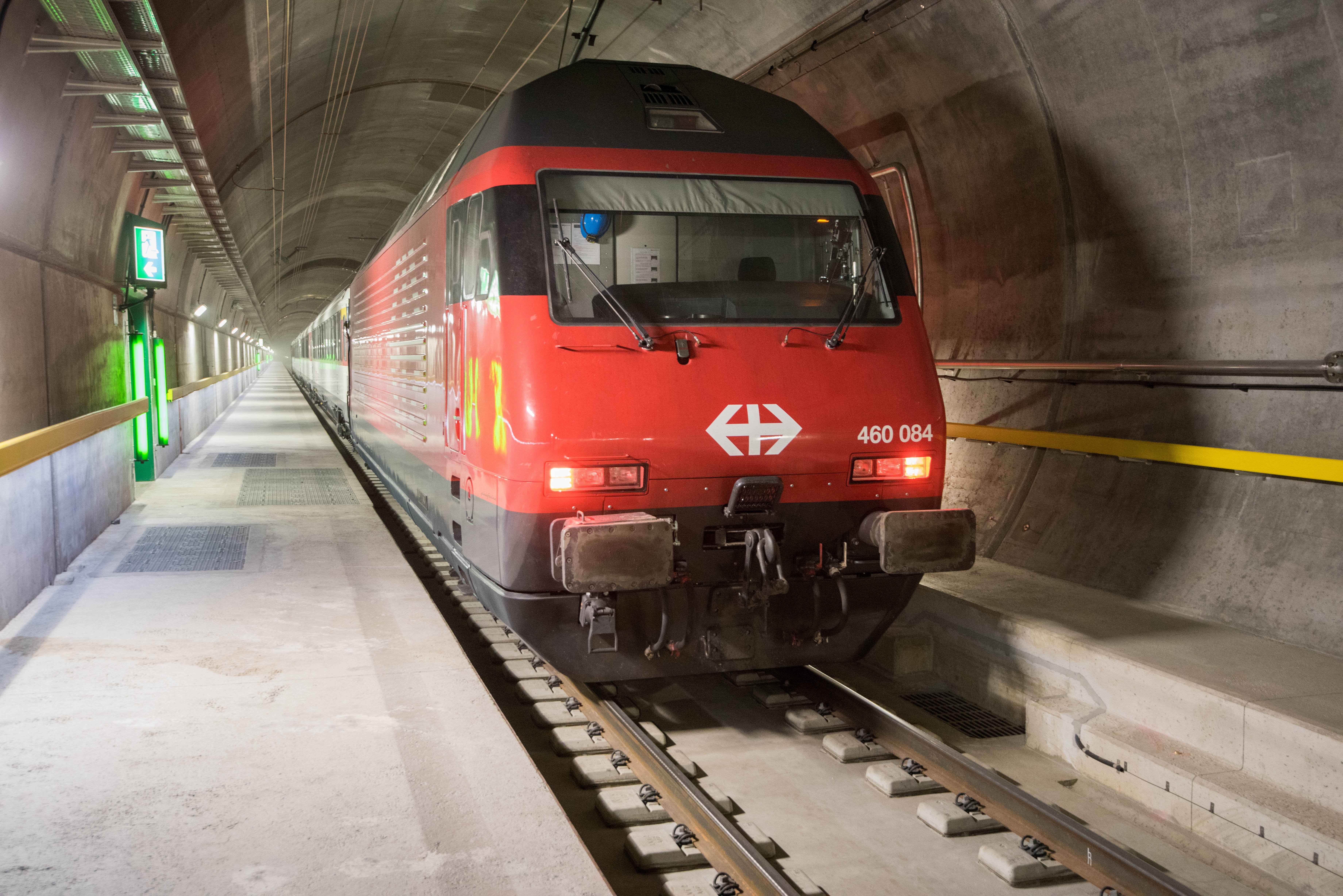 During peak times, around 2,400 people worked on the building sites on the tunnel structure. And they did this around the clock. Split into three shifts. The workers covered 152 kilometers of length and 28.2 million tons of excavated material. The tunnel boring machine on the Gotthard was almost as long as four football fields in a row.

450 meters long, 2,700 tons heavy and a diameter of up to 9.5 meters. The monster drilled through various layers of rock at 6 revolutions per minute. From hard granite to broken sediment. 80 percent of the tunnel construction took place with the help of the tunnel boring machines. The remaining 20 percent was done with conventional blasting.

Straight Through the Alps

The Gotthard Base Tunnel runs from the central Swiss town of Erstfeld to Bodio in the canton of Ticino. It now forms the heart of the newly built railway line between northern and southern Europe. It connects the industrial centers of Belgium, Italy, Germany, Holland and Switzerland. The port cities of Rotterdam and Genoa should benefit from freight traffic above all. 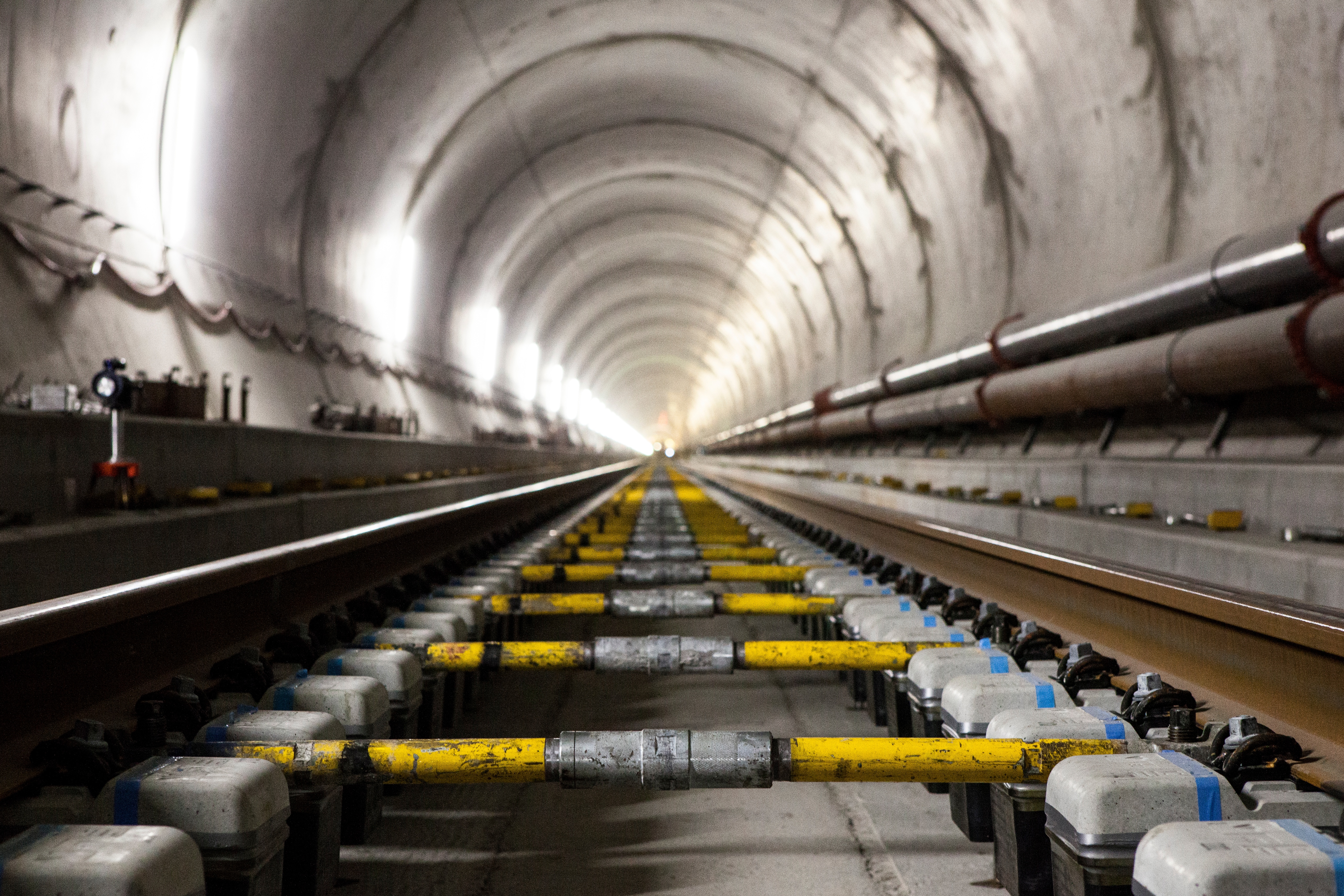 A tunnel with a long history

The tunnel construction took 17 years. The planning for this project, however, goes back quite a bit further. Already in 1947, the engineer and traffic planner Carl Eduard Gruner sketched the idea of a Gotthard Base Tunnel between Amsteg and Bodio. However, it would take several decades until it was realized.

In the 1960s, the Swiss government set up a body for the first time to look into the construction of a base tunnel under the Gotthard. The recession of the 1970s and the disagreement between the proponents of various versions blocked the tunnel construction for decades. In 1992 and 1998, the Swiss then voted for the construction in two referendums. One year later in 1999, work finally began on the mammoth project. The Alpine puncture was celebrated 15 years later.

Had the work started already one year earlier, work probably would not have progressed so quickly. At the time, progress would mainly have been made by blasting and drilling of the simplest kind. Now an ultra modern and gigantic tunnel boring machine does the work.

These are not just any women's names, no. These are the nicknames of the four boring machines, each over 400 meters long. They ate their way through the rock, carried it off and at the same time laid pre-fabricated concrete walls. Ultra-modern boring technology from Germany, more specifically from Baden-Württemberg. The first boring head with a diameter of 9.5 meters is now in a museum. 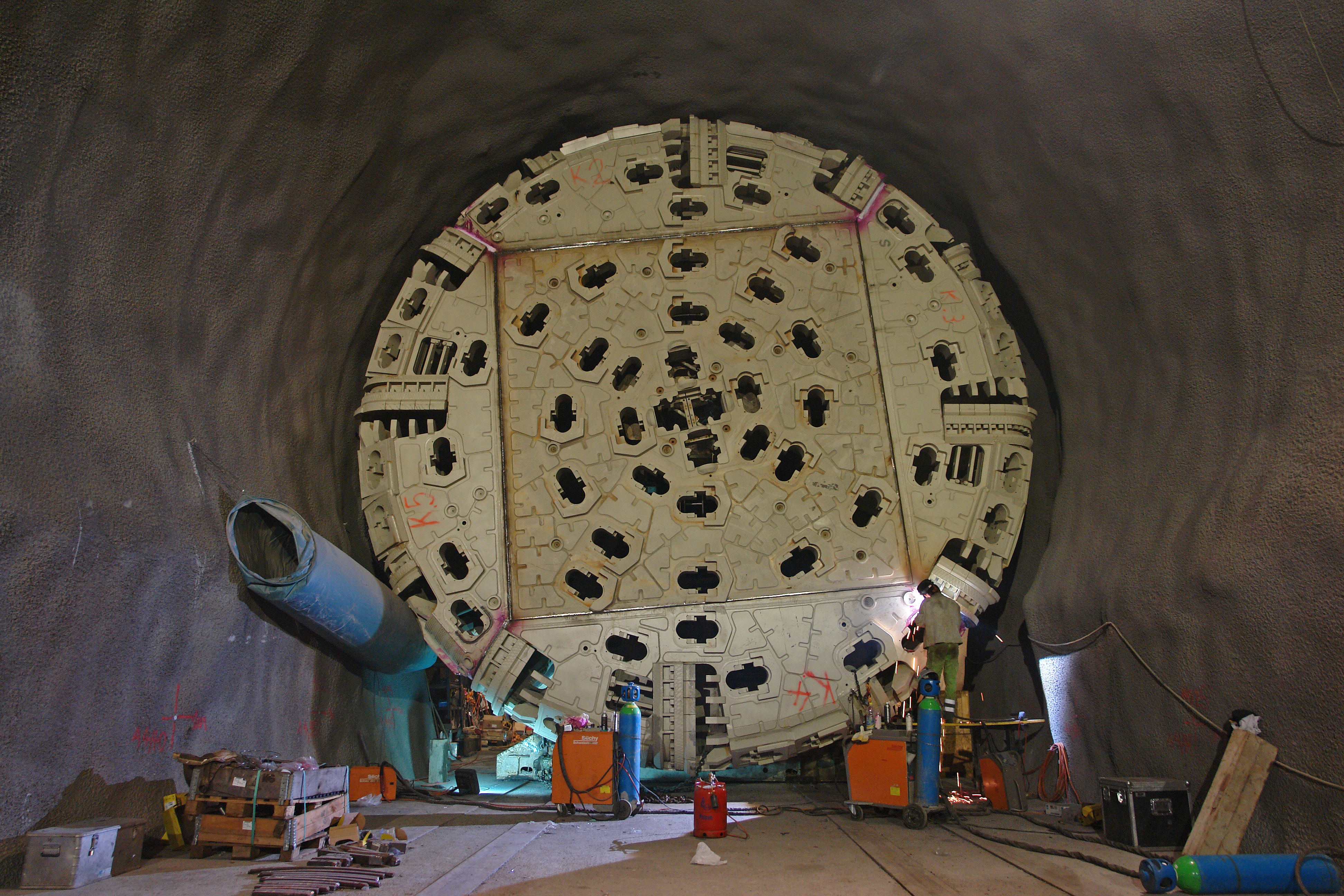 The biggest advantage of the tunnel

Passenger trains can now drive through the tunnel at up to 200 km/hr. Two passenger trains per hour and direction will soon be on the track. This will cut the travel time between Zürich and Milan by half an hour. Furthermore, the Swiss want to shift the transport of goods and people more from the street to the rail. The new railway tunnel and a higher truck toll should reduce the number of truck trips and thus protect the alpine landscape.

Previous post: Series: BIM development levels - Part 2
Next post: Find out why Engineers should switch to the 3D working method