Colorful wooden houses with white painted window frames: This is Suomi, the land of a thousand lakes. Finland is celebrating a big birthday in 2017. The Baltic Sea state has been independent and a democracy for 100 years - one of the youngest in Europe. Only 13 percent of the buildings that stand here today are older than that. Nevertheless, Finnish architecture has a great tradition. Names such as Alvar Aalto, Eero Saarinen or Viljo Revell are known around the world and their architectural works are an expression of the Finnish pursuit for autonomy. We will provide an overview of more than a hundred years of architecture from the far north. 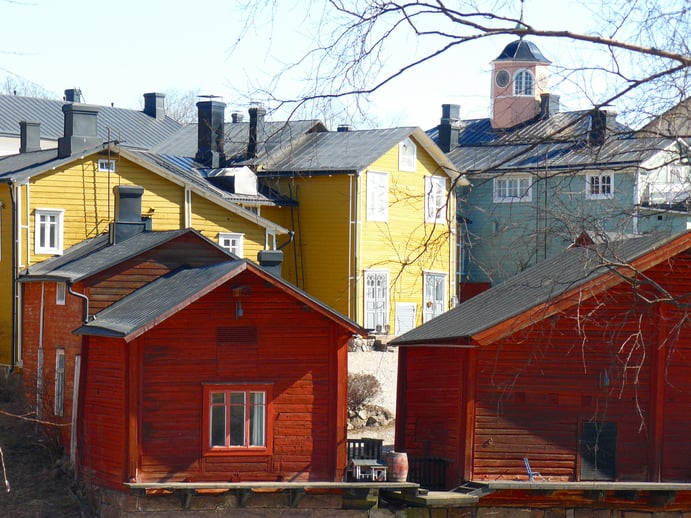 The Republic of Finland is young. Nevertheless, it has historical architecture. However, this differs greatly from the architecture of other European nations. Finland does not have opulent castles surrounded by parks, as you can find in Germany, England, France and Poland. What is still really old was not constructed in the original Finnish log building, but rather is made of stone: Massive fortresses and unadorned churches. The typical colorful, Scandinavian wooden architecture began to flourish in the 18th century. Many historical wooden houses have been preserved in the old town of Porvoo and in Kristinestad in southern Finland. The church architecture in particular is famous: The wooden church in central Finnish Petäjävesi , built in 1764, is a UNESCO World Heritage Site.

Building with wood is deeply rooted in Finnish culture. The Finns imported log building from the Russian area in the 9th century. The wooden houses were originally made of trunks and beams horizontally laid over each other, which people started painting in the 18th century: first red, later ocher yellow as well. Large buildings in elaborate log building architecture were a privilege of rich families – and of churches. It was common to board log buildings in the 19th century. The wood boarding was a sign of prosperity. Residential buildings were often painted yellow and economic buildings were painted red. In Karelia, a region in the east that is divided between Finland and Russia, also developed its own building style with ornamental carvings and paintings. 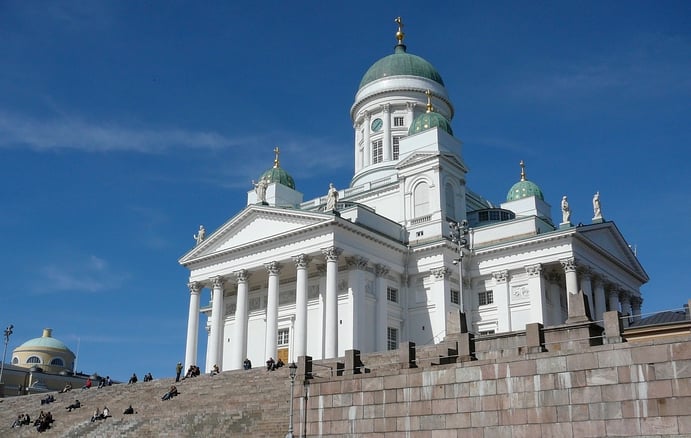 Finnish architecture was characterized by classicism in the early 19th century. The German architect Carl Ludwig Engel built the church of Liminka and the cathedral of Lapua. He also shaped the city center of Helsinki with his works. The emerging national romanticism and Art Nouveau then brought European influences into play at the start of the 20th century. The design was decorated more playfully and richly, which above all was reflected in the traditional Karelian wooden architecture. The Finnish Art Nouveau was strongly inspired by the national epic "Kalevala," which occurs in Karelia. The most important structures of national romanticism is Helsinki's main train station finished in 1919 by architect Eliel Saarinen. Another very well-known work comes from his colleague Lars Sonck: In 1903, he planned the Villa Ainola for the composer Jean Sibelius.

In an opposite direction to the playful Art Nouveau, Finnish architecture took a new path when it achieved independence: away from the ornamentation and towards a stricter form of language. Starting in the 1930s, functionalism developed into a prevailing style. As a pioneer of the new Nordic design, Alvar Aalto, the most famous Finnish architect, transformed the lines of Finland's lake and forest landscape into an architecture of curves, waves and shapes. For him, the function of a building was to create a sense of well-being for its residents and users. The pulmonary sanitarium of Paimio, which he built in southwestern Finland, is one of his key works: Healing through architecture - with the organic forms of Finnish nature.

Today, an aspiring generation of young architects is attempting to carry on this path - with architecture that serves society. We will show you how they are doing this in part II of our Finnish series on Finnish Modernism.

Previous post: Corporate Architecture: Architecture as a Marketing Measure
Next post: 150 years of Frank Lloyd Wright: About an idiosyncratic genius