Plastic as a replacement for cement: Stronger eco-cement in the future?

Used plastic bottles which make foundations, bridges and walkways more stable? Students at Massachusetts Institute of Technology have developed a process that strengthens both concrete and plastic waste as well as reduces CO2 emissions. In the process, it uses ordinary PET bottles from the garbage dump. Learn what is so special about "plastic concrete" in this post.

All over the world, researchers are looking for solutions to create environmentally friendly buildings. According to recent estimates, worldwide production of concrete causes around five percent of global CO2 emissions. Another environmental disaster: Each year, more than eight million tons of plastic waste flow into the sea via our coasts and rivers. Two students at Massachusetts Institute of Technology - Carolyn Schaefer and Michael Ortega - have now developed a technology that might remedy both problems.

The "climate killer" of the construction industry is, strictly speaking, the binding agent, cement. Around 45 percent of concrete emissions are caused by the chemical process where limestone is converted into cement clinker in cement kilns at 1,500 degrees Celsius. Schaefer and Ortega investigated whether a part of the cement can be replaced by finely ground plastic from old plastic bottles.

Previous studies suggested that the addition of powdered PET does not make the concrete more stable, but, on the contrary, weakens it. So the young researchers looked for a way to change the structure of the PET. They finally succeeded in doing this through a treatment of the plastic with harmless gamma radiation. Their experiments showed that this radiation shower leads to chemical rearrangements in the polymer molecules. Interconnections emerge between the molecular chains which make the PET more rigid and stable. Porous areas become filled.

In order to test the stability of the “plastic concrete", the students mixed cement with a fine powder of the irradiated PET bottles and used it to pour concrete blockse. A compression test showed: The PET-concrete blocks were up to 20 percent more stable than normal cement. Used plastic bottles could make foundations, bridges, walkways and barriers more stable in the future in this way. The addition of 1.5 percent PET powder improves the concrete structure.

Two further advantages: By replacing a part of the cement with plastic, fewer emissions result from the concrete production. At the same time, fewer PET bottles land on the garbage dumps. "The technology helps to make buildings more stable, while at the same time reducing the quantity of waste and CO2 emissions”, is the conclusion of Michael Short from the Department of Nuclear Science and Engineering. 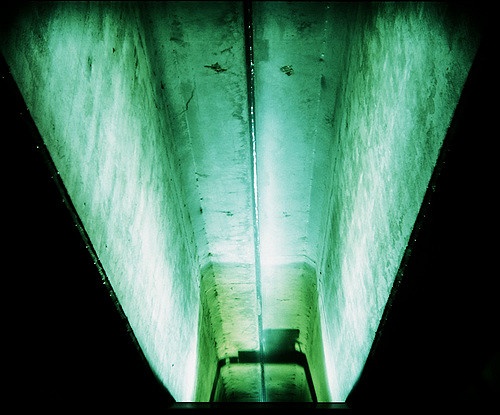 Eco-cement in the test stage

Although it may only be a small proportion of concrete that can be replaced by plastic thereby also stretching the material, the adverse effect on the environment by the cement industry can be reduced drastically. All processes for producing eco-cement are still in the test stage - as are other research projects which are, for example, experimenting with replacing cement with limestone or carbon fibers. A building approval of the "green" concrete mixture for load-bearing exterior walls is still pending.

Want to learn more about concrete? Read our post on the advantages and disadvantages of construction with the 'gray' gold and learn what alternatives already exist for architects and developers.