Bridges connect worlds and bring people together. This thousand-year-old concept still applies. However, in addition to the functionality of these constructions, their design also plays an important part. Thanks to the collaboration of architects and engineers, outstanding bridges have emerged which have become landmarks of their respective city. Their unique design not only attracts tourists but awakens the pride of the inhabitants of these cities. In this contribution, we will introduce to you four impressive examples of world-wide bridge construction.

A wide variety of materials and functions

Over the centuries, a wide variety of materials have been used in bridge construction. At first, they were wooden, even if only in the form of a tree trunk to cross a river. Later, stone followed, such as the Rialto Bridge in Venice which was built in the 16th century. As railways began to conquer the land, bridges had to be longer and carry a greater load. Steel was now the dominant building material - functionality and structural quality were the focus.

In the 20th century bridge construction developed using steel and pre-stressed concrete as well as wire ropes. Bridges always demonstrated the latest state of technological development for their respective times. Nowadays, they are in competition with skyscrapers: The one group pushes to the heavens, the other gets longer and longer. In addition, design plays an important role: Bridges have become landmark structures in cities of the world.

The Harbor Bridge in Sydney, Australia represents the modern nature of citites and the bright future of the country. Since 1932, it has been connecting the north and south coast of this big city. As an arched bridge with the nickname "coat hanger” it has a span of 503 meters. The arch rises 134 meters above sea level. The engineers used a total of 52,800 tons of steel. It is one of the heaviest and longest arched bridges of the world. The granite-clad pillars are pure decoration - huge blocks on the bottom of the sea act as foundations. 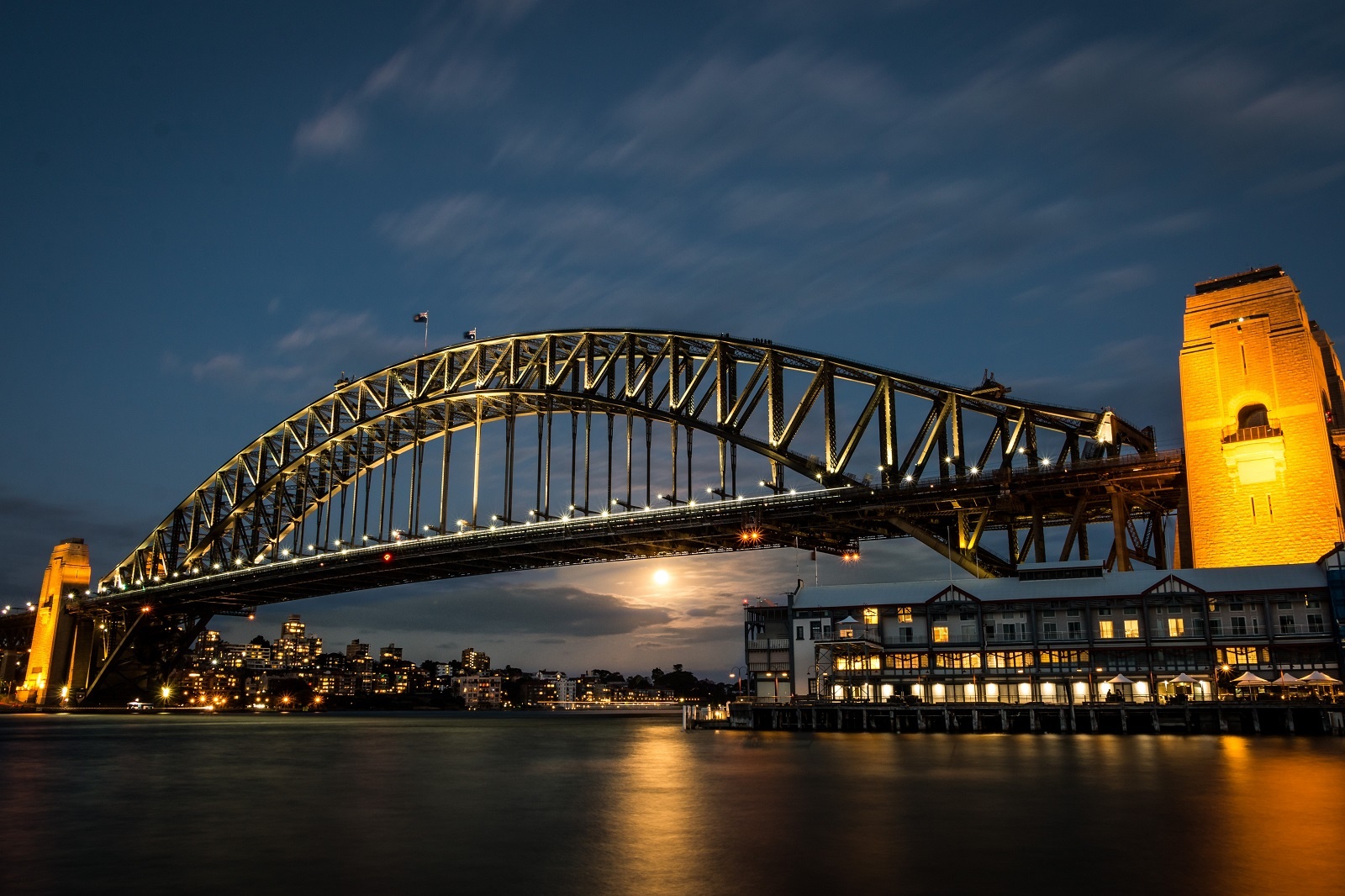 Since 1995 the Golden Gate Bridge has been officially known as one of the modern wonders of the world. With a length of 2.7 kilometers, this suspension bridge has been spanning the entrance to the bay in front of San Francisco since 1937. It covers 1,280 meters without any pillars - a masterpiece of bridge construction. The two steel pylons each rise up to a height of 227 meters.

The Erasmus Bridge in Rotterdam also spans a stretch of water: the Nieuwe Maas river. The construction is an asymmetric cable-stayed bridge with a length of 802 meters. The 139-meter high pylon takes on a white, oblique angled shape that is reminiscent of a swan. To the south it is joined by a bascule bridge with a span of 89 meters. It is the largest and heaviest bridge of its kind in Western Europe. 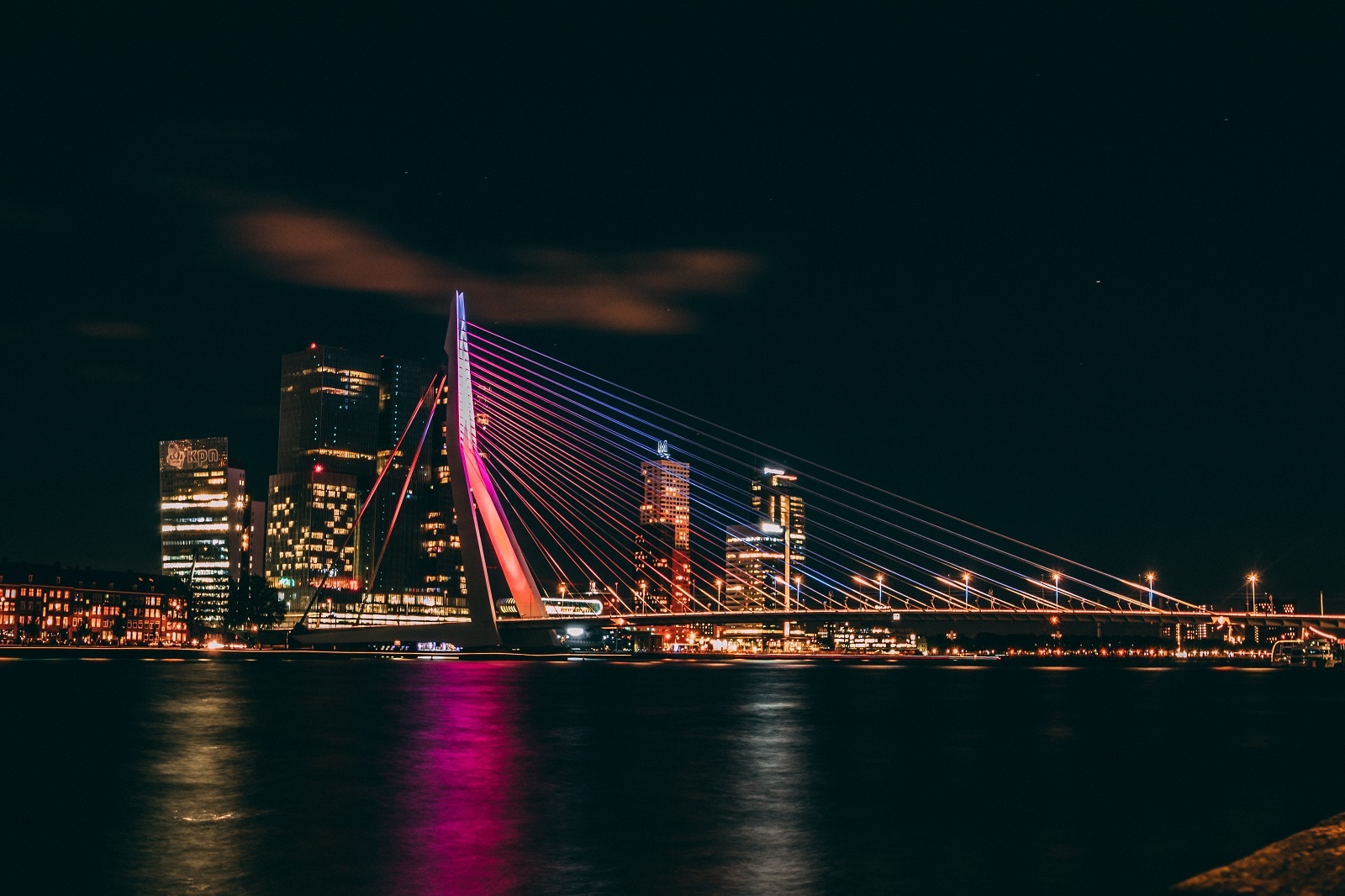 The landmark of the new suburb of Marina Bay literally winds across the water. The globally unique steel construction with a double spiral offers pedestrians breathtaking views of the bay over a length of 280 meters. Despite its low weight of 1,700 tons, it can carry up to 16,000 people at the one time. The Australian architects, Cox Group, and the engineering consultancy, Arup Pte Ltd., chose stainless duplex steel, which is characterized by its high structural stability with low maintenance, as the material.

Whether for cars, trains, cyclists or pedestrians - modern bridges are much more than functional transport routes.in the urban area. They have developed into objects and attractions of prestige for locals and tourists. Their design shapes the image of the city. Like the Marina Bay Bridge in Singapore, there are other impressive pedestrian bridges with stunning designs that have become landmarks.

Previous post: Architecture in film: When buildings play the leading role
Next post: It's finally here: Living in a mobile home at the push of a button