When a BIM pilot project in Lower Saxony became too demanding for their modeling software, THORMÄHLEN + PEUCKERT successfully switched to Allplan Bridge.

You learn from mistakes. This is not only one of the most important foundations for success in general, but also one of the core principles of pilot projects. It's about finding out what works and what doesn't. As part of the efforts of the federal and state governments to promote digital design and construction, a large number of infrastructure projects are currently being carried out in which the foundations for the application of BIM are being developed. This sometimes also involves choosing the right software. In the Lower Saxony BIM pilot project "Highway A1: Replacement of the bridge over the Hase and the Stichkanal" near Osnabrück, the modeling software was replaced by Allplan Bridge in the middle of the project. A "learning success" that paid off. 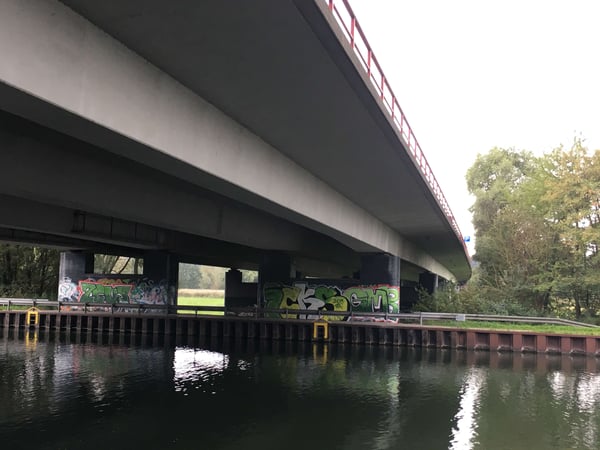 Replacement for seven-span bridge from 1969

Due to the high volume of traffic, the A1 highway between the Ahlhorner Heide interchange and the Lotte/Osnabrück interchange has been widened from four to six lanes for several years. This expansion in six construction phases includes a seven-span bridge built in 1969 between the Osnabrück Nord and Osnabrück Hafen junctions. The 261.5-meter-long structure crosses the Osnabrück branch canal including service road and embankment section, the Hase watercourse as well as unpaved areas in the floodplain and a service road with adjacent ditch. A structural analysis showed that the bridge does not have sufficient load-bearing capacity in the longitudinal and transverse directions. According to the expert opinion, the target load level could only be achieved by a new replacement structure. 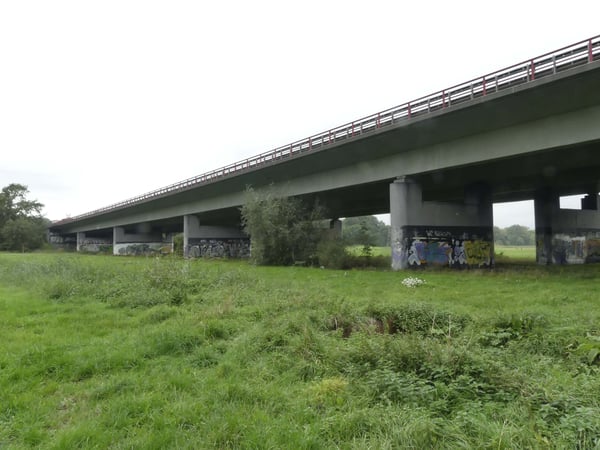 The client, the Lower Saxony State Authority for Road Construction and Traffic (NLStBV), commissioned THORMÄHLEN + PEUCKERT with a variant investigation in the course of the preliminary planning as well as with the modeling of the preferred variant for the construction of the new replacement. The engineers calculated a total of nine variants, in each of which the structure was separated into a canal bridge and a foreshore bridge. Preference was given to a variant consisting of a tied arch bridge with a span of 68.0 m in the area of the canal crossing and a subsequent foreshore bridge as a two-span plate girder with two integral support axes and variable headroom. The individual spans of the foreshore bridge vary between span widths of 25.8 and 56 meters.

Once the preferred variant had been decided, it still had to be modeled. The alignment axes in particular posed an enormous challenge, as they differed in the two directional lanes and required, among other things, a complicated cross-section widening of the RF Dortmund. The engineers soon realized that the software they were using was not up to the complexity of the task and that too much time would have to be invested in modeling. Thus, they decided to switch to Allplan Bridge during the ongoing project. 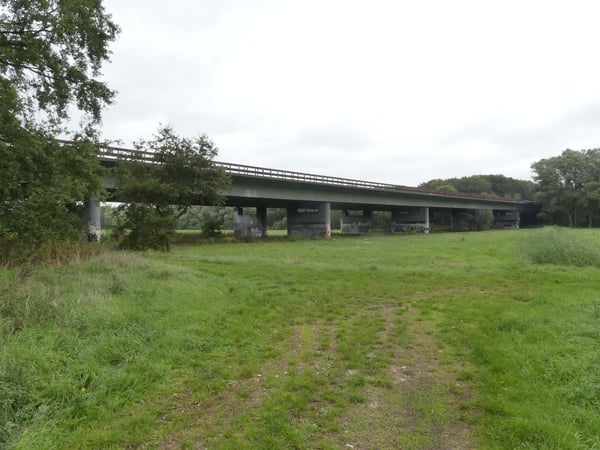 In Allplan Bridge, they were able to create a parametric bridge model that automatically generated correct geometry based on the values entered. For example, for the Dortmund directional carriageway, variable slab widths for the channel bridge could be easily modeled for arch compensation, or cross girder heights for slope compensation could be adjusted using Boolean operators for constant carriageway slab thickness.

Error-free modeling thanks to Allplan Bridge

Hendrik Martin, project manager for structural engineering/bridge construction at THORMÄHLEN + PEUCKERT, is enthusiastic: "By switching to Allplan Bridge during ongoing project processing, we have succeeded in achieving error-free modeling of the new replacement canal and foreshore bridge in the course of the motorway A1 near Osnabrück. Allplan Bridge makes it possible to implement complex structural designs and to adapt them to demanding route layouts. Arched structures in composite construction with subsequent semi-integral and haunched prestressed concrete structures could thus be harmonized despite differently routed gradient girder axes."