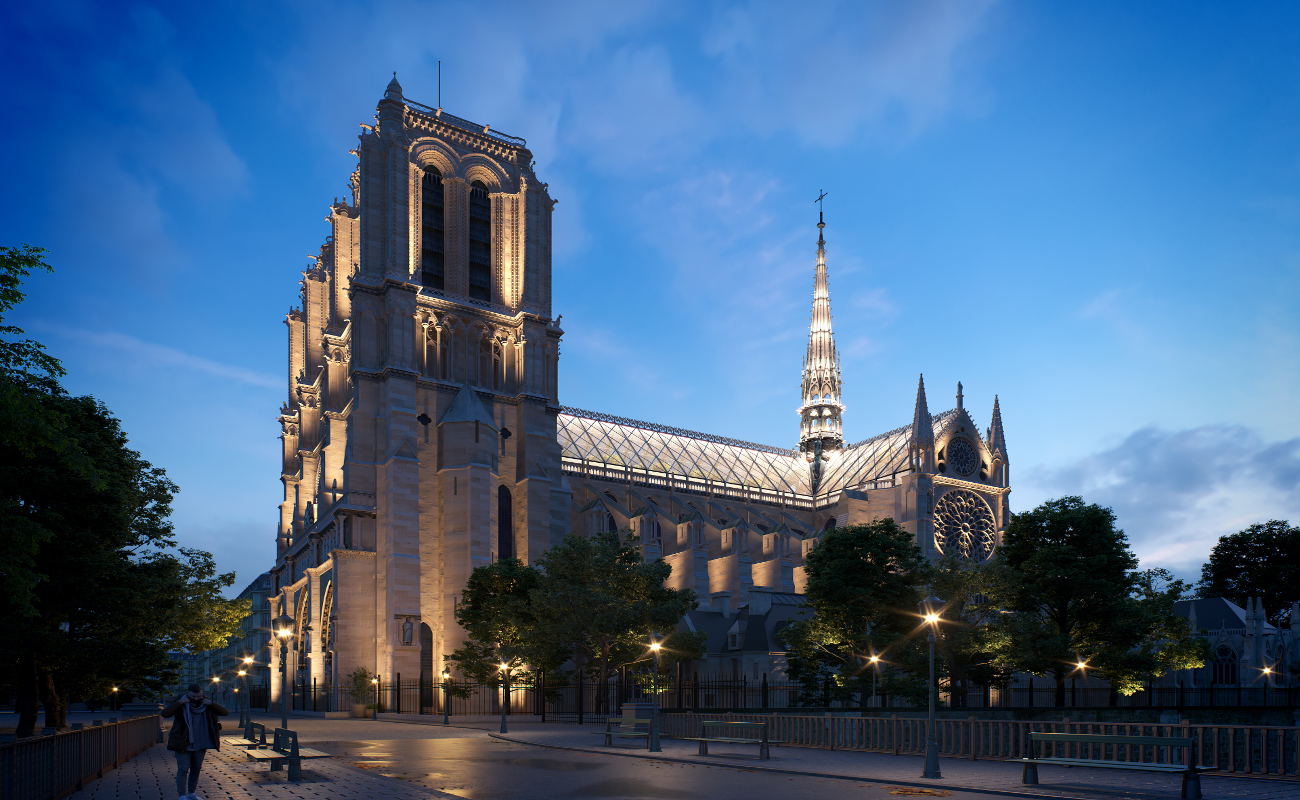 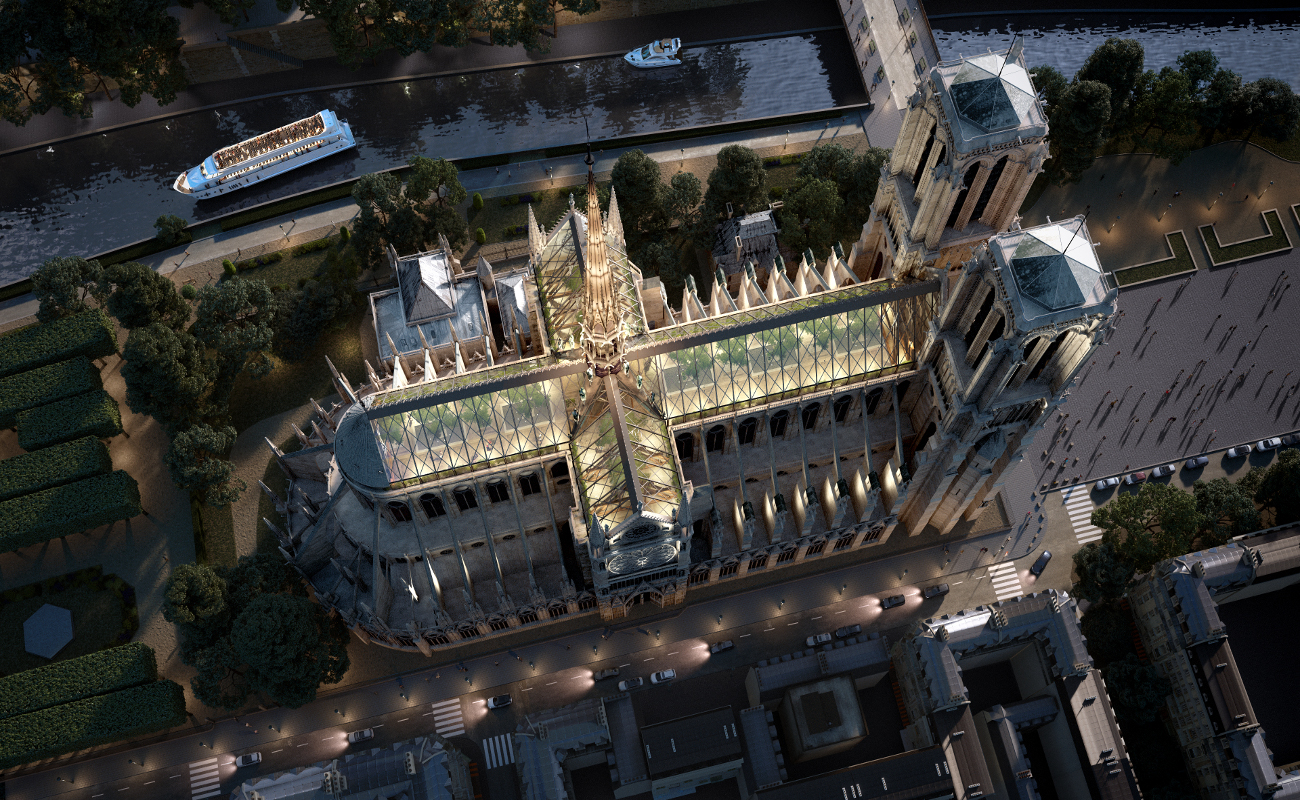 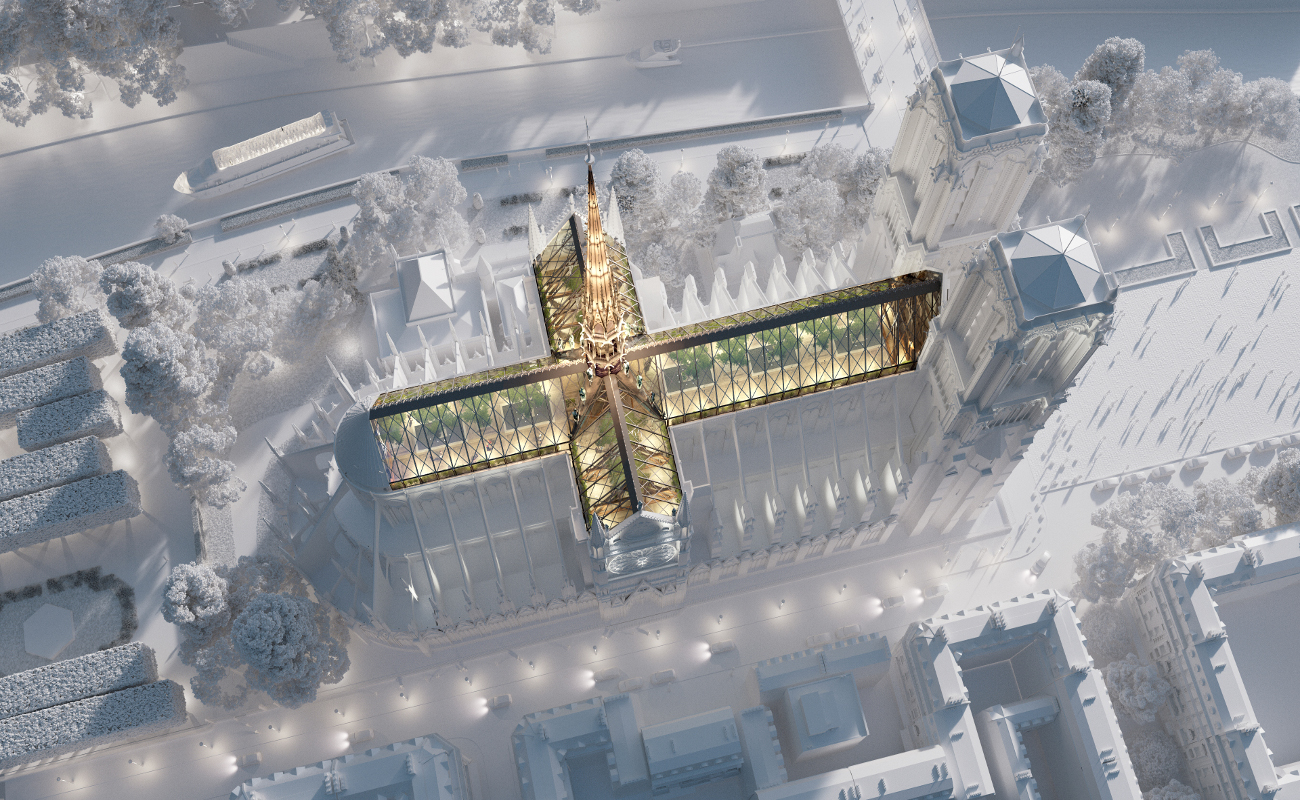 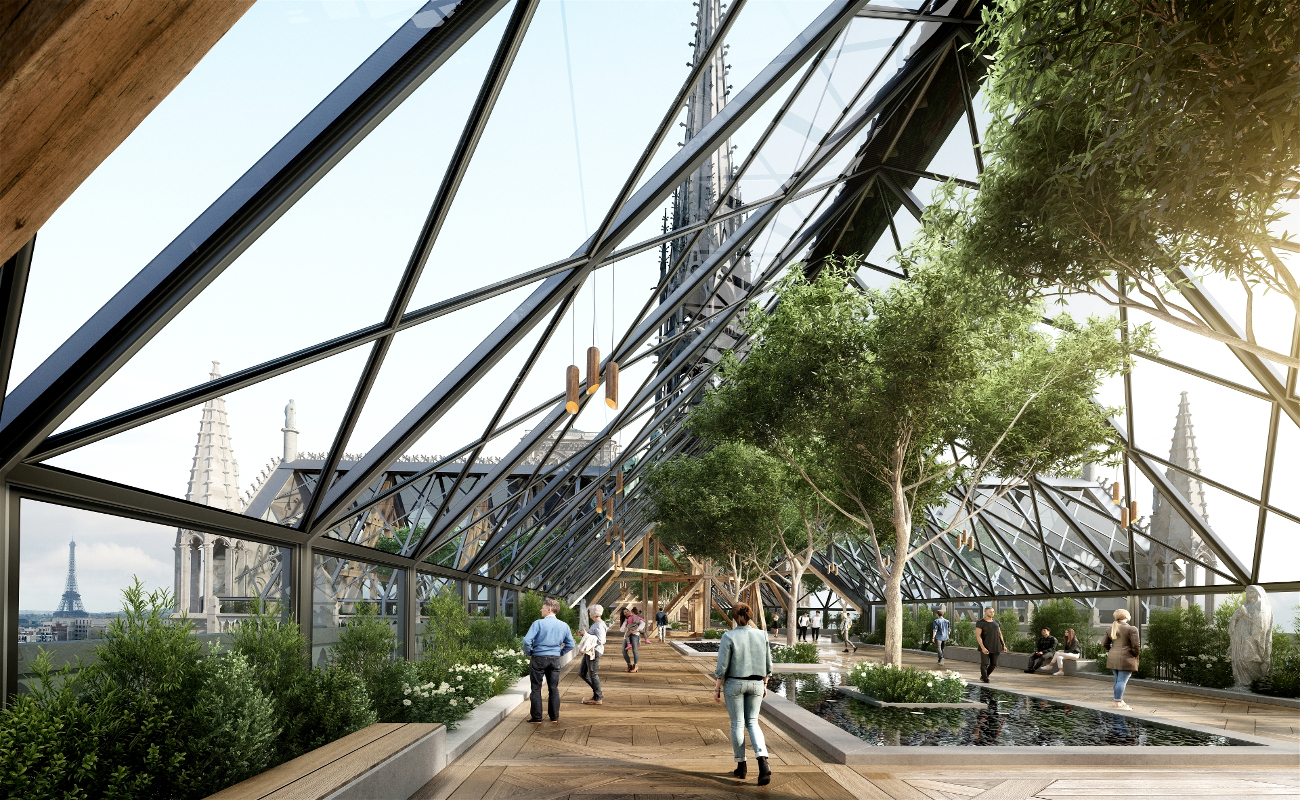 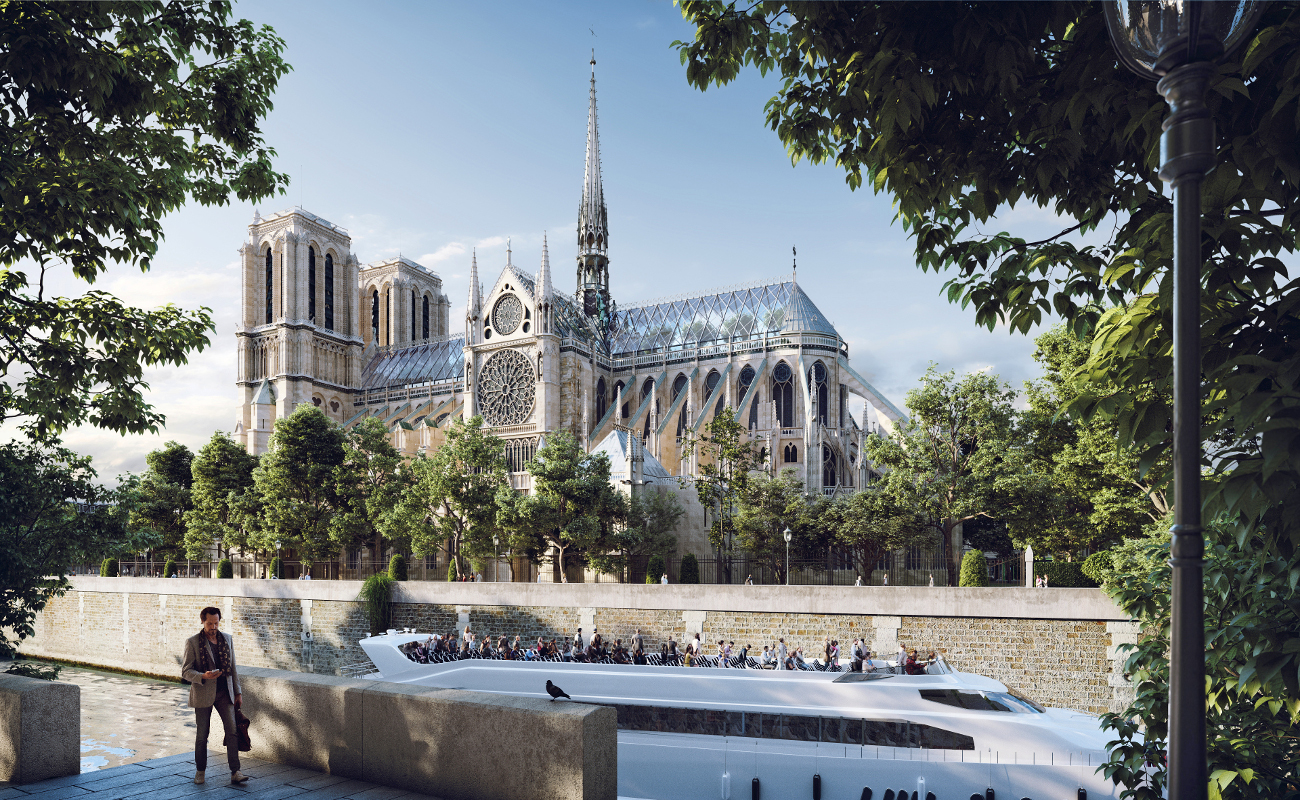 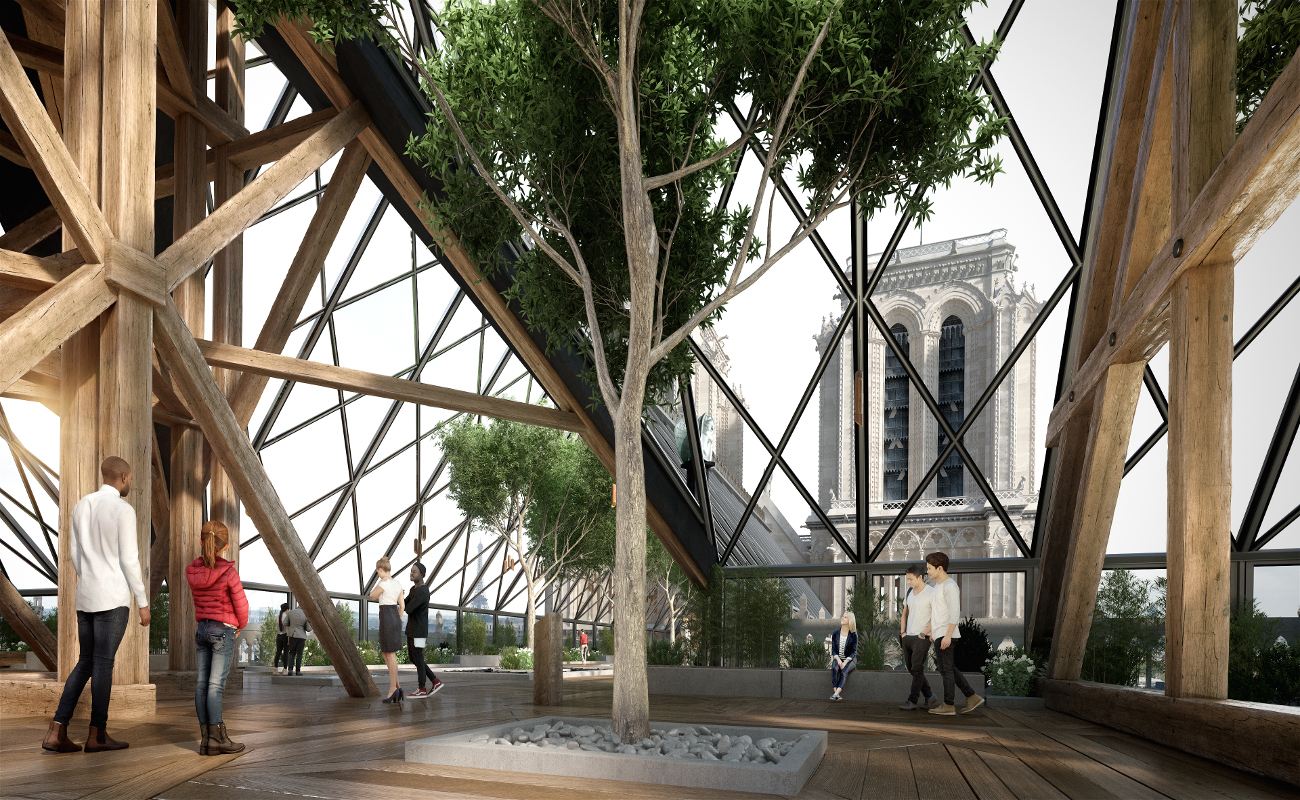 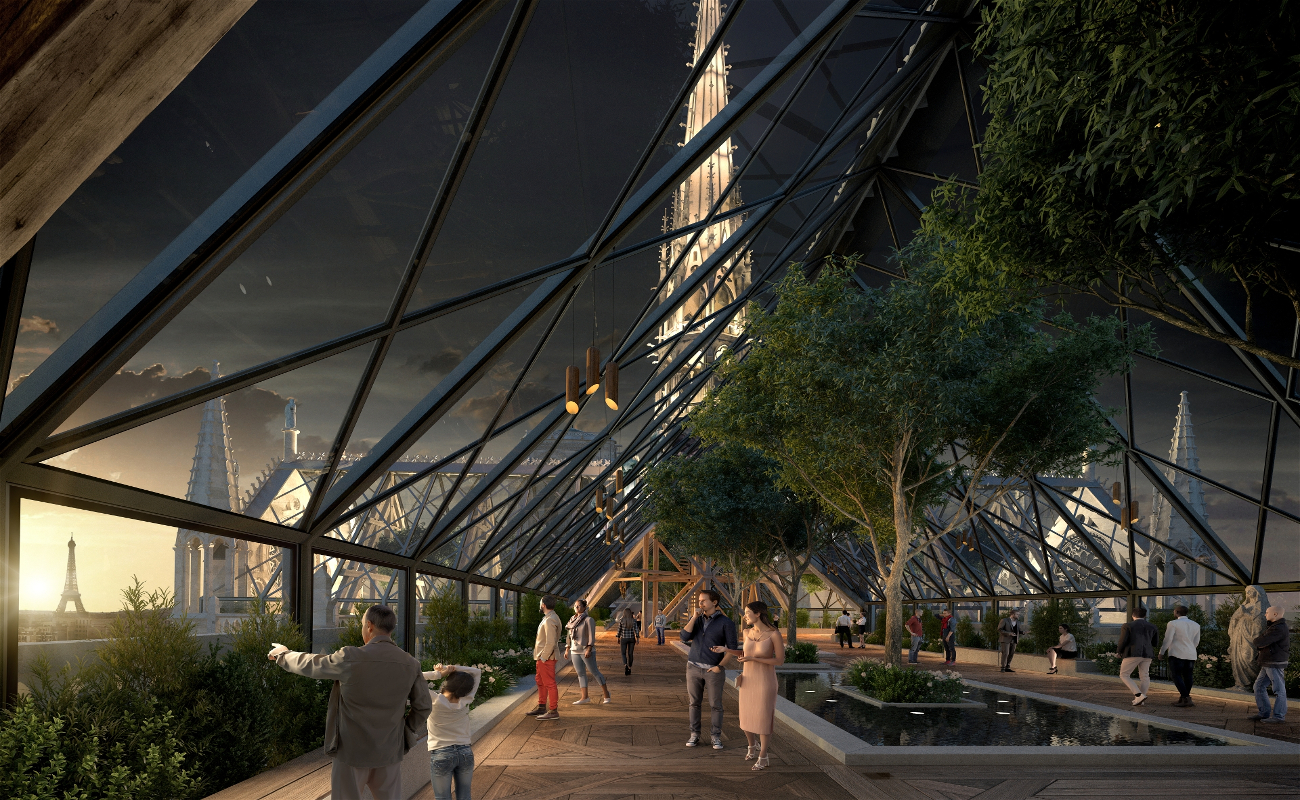 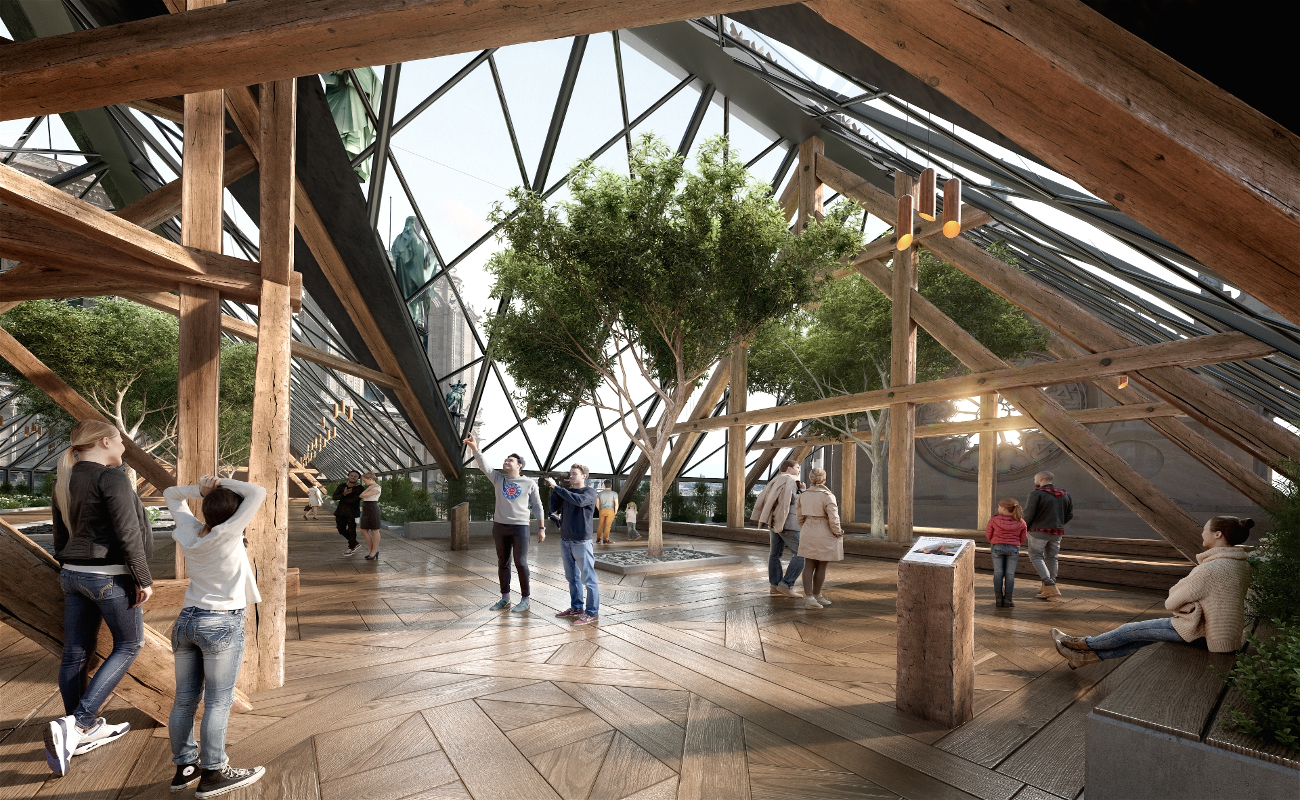 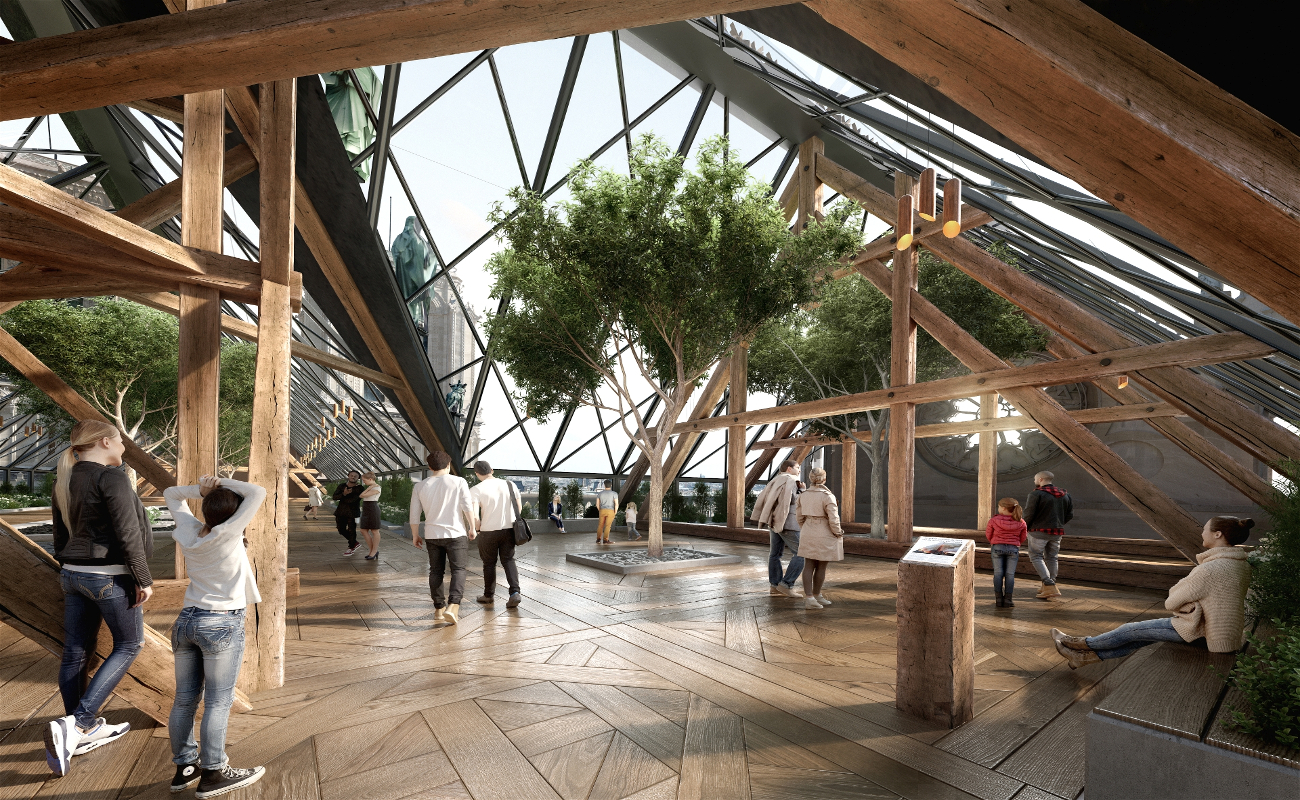 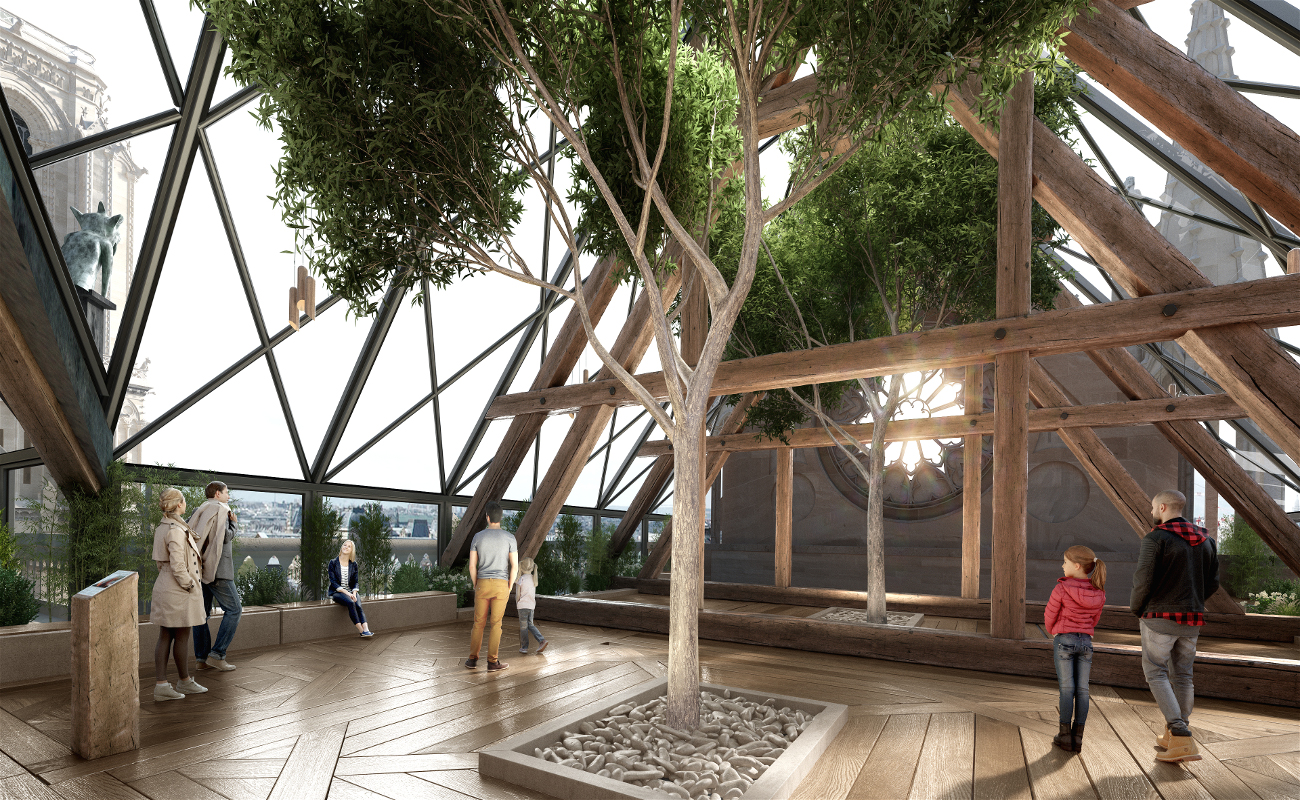 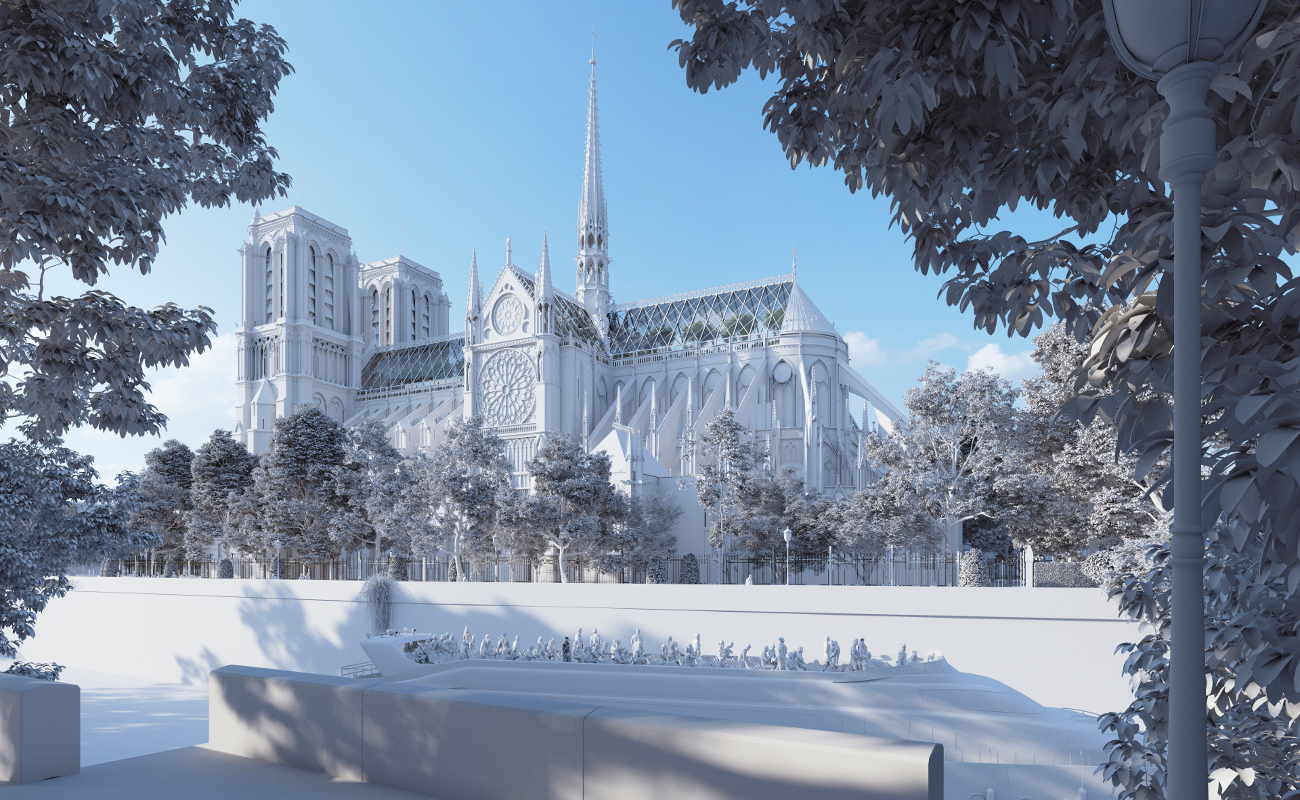 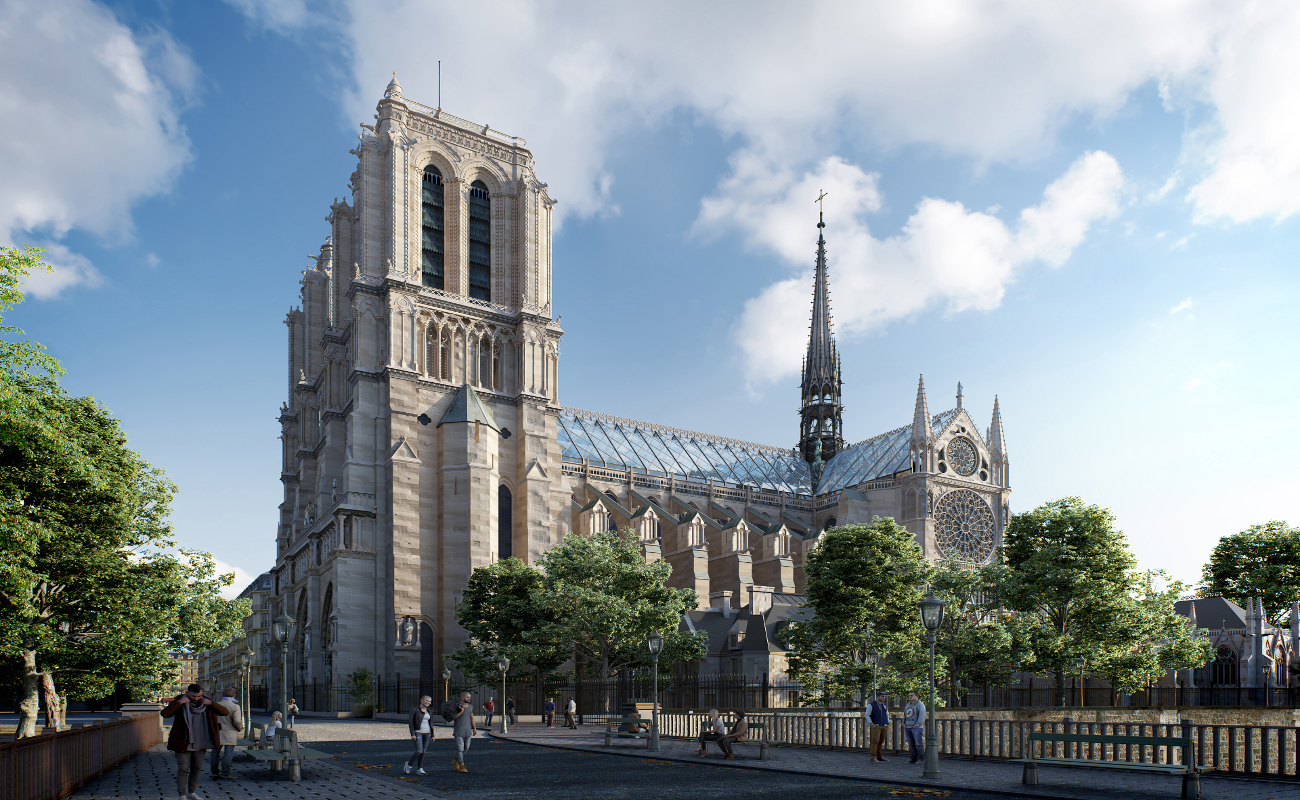 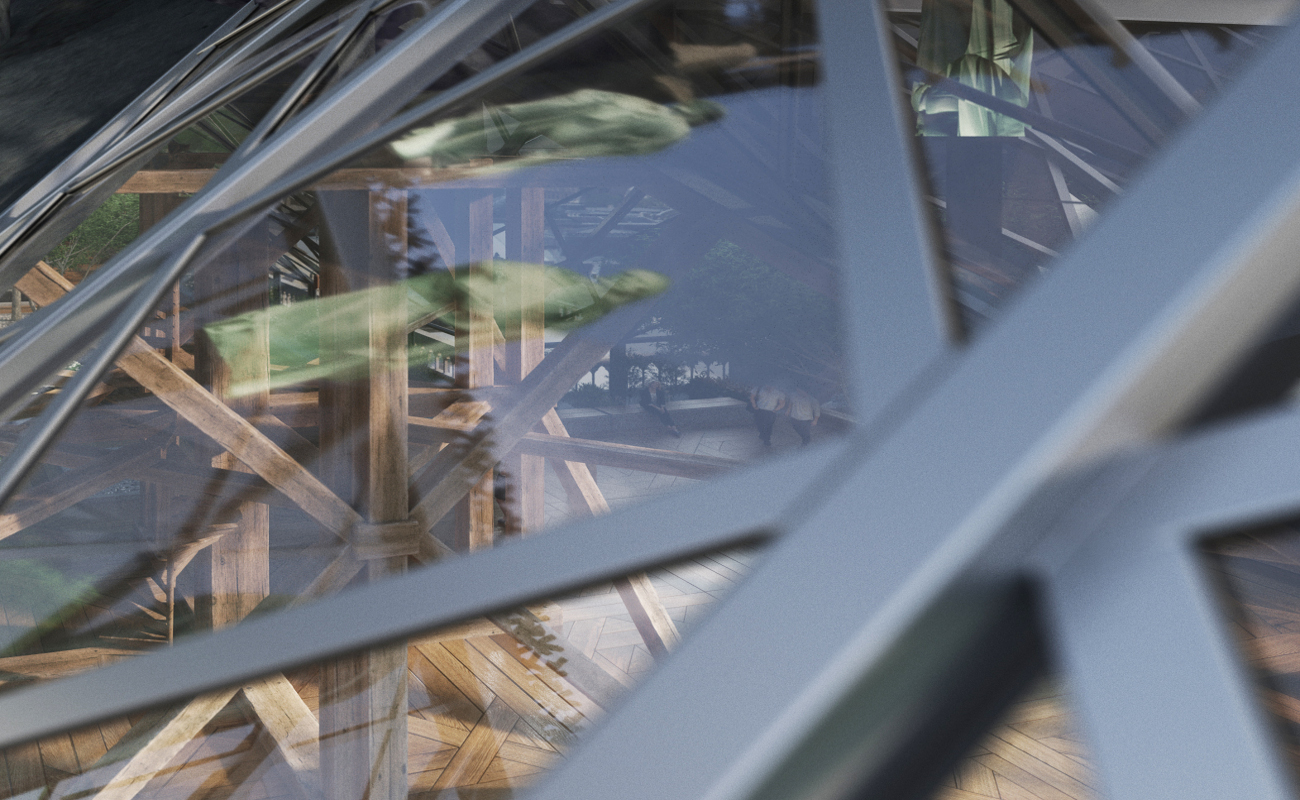 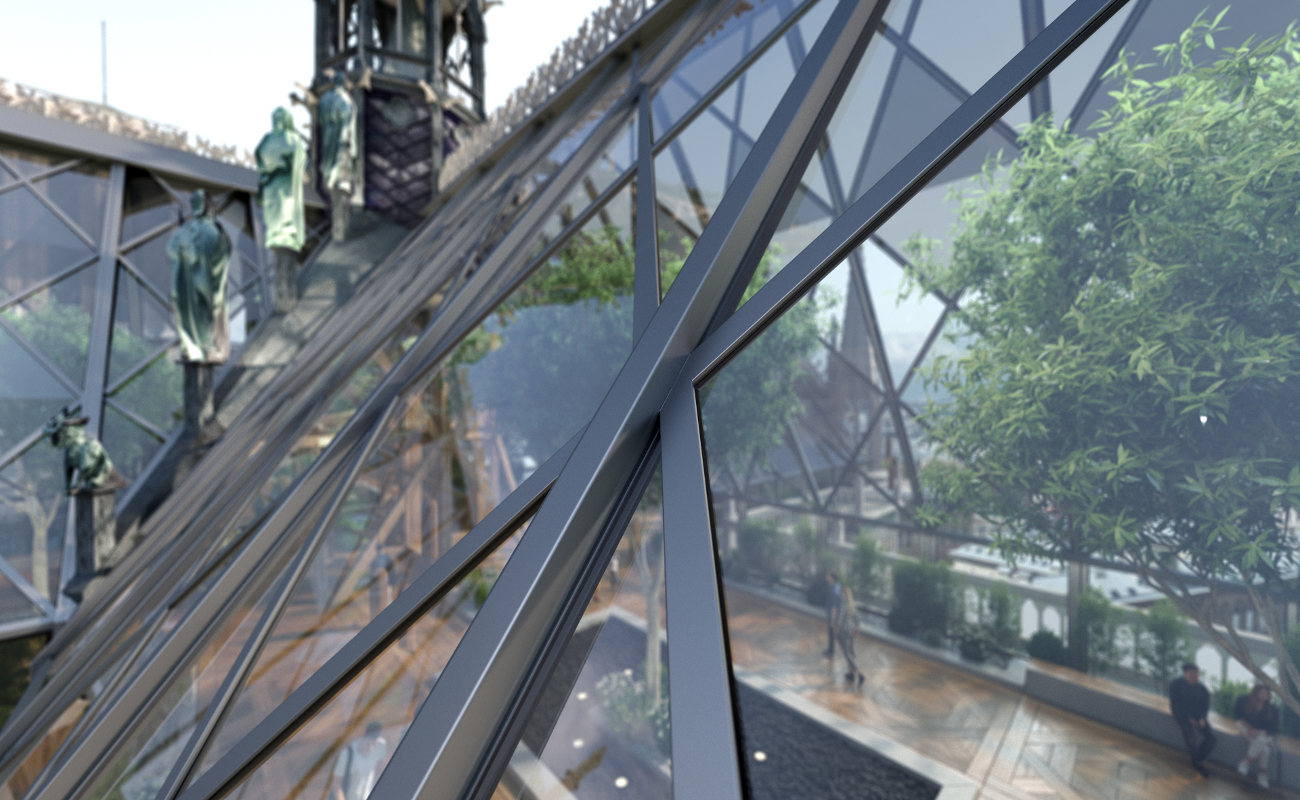 A new roof for Notre-Dame

After the destruction of the roof and crossing tower of Notre-Dame, numerous architects provided creative new designs. Premature, as it turned out in the meantime.

From a purely objective point of view, it was not a real catastrophe, since no one had been physically harmed. Nonetheless, all the French were stabbed in the heart when one of the most famous churches in the world, Notre-Dame de Paris Cathedral, burned on 15 and 16 April 2019. The fact that a piece of France, felt to be burning, went up in flames was proved by the worldwide sympathy - and the will to donate enormous sums. Within a very short time, major companies such as Arnault, Bettencourt-Meyers and Pinault had pledged hundreds of millions for the reconstruction. Meanwhile, the architectural guild soon came up with numerous designs for a new roof. However, like Emmanuel Macron's reconstruction promises, these probably came prematurely.

The silhouette resembles the original condition, but in daylight it turns out to be a ghost: glass arches over the venerable sacred building and bridges the gap between past and present. The space under the roof, which was once called a "forest" because of its 1,300 oak trees, now becomes a "garden" under the glass vault with living trees, shrubs and flowers. This vision of the Belgian visualization office Miyisis Studio is only one of many that circulated shortly after the partial destruction of the cathedral. Roofs made of glass or even crystal were among the most common motifs. However, it is doubtful at this stage that one of these designs will ultimately have a chance of being realized.

A buzz kill for creative people

The reason for the numerous design ideas was President Macron's early promise to rebuild the church within the next five years, in time for the Olympic Games. At the same time the head of state called for an "original" reconstruction, Prime Minister Eduard Philippe already spoke of an architectural competition - with original designs as a result. At the end of May, the House of Commons and the Senate finally passed a law that established the restoration within the promised period. At the same time, however, it determined that the last visual state of Notre-Dame was to be restored.

A buzz kill for creative people on the one hand, on the other hand this might correspond to the wish of the French majority. But apart from the president's appeal for an "original" reconstruction, the latter's promise of the time frame for the reconstruction, which has now become law, also wavers. While the chief architect for historical buildings, Philippe Villeneuve, considers the timetable to be possible, 1,170 experts have already called for prudence in a petition. The restorers and architects called for a thorough damage analysis before a bold timetable was set for the reconstruction.

The former Cologne conservation architect Barbara Schock-Werner, who coordinates German aid for reconstruction, expressed similar concerns. She is also sceptical about the exceptions for the protection of historical monuments (in addition to these, environmental protection requirements are also circumvented). So let us hope that the hasty reconstruction, which was born out of love for the building, will not cause even more damage.