The huge robot arm precisely sprays special concrete on the ground, layer by layer. Walls become taller, a complete unfinished structure is created – all in just 24 hours. This idea is no longer a futuristic dream, but rather has become reality. This is made possible by 3D printing with high-tech building materials. In this article, learn how entire houses are made with 3D printers and discover innovative building technologies that are sustainably changing architecture. 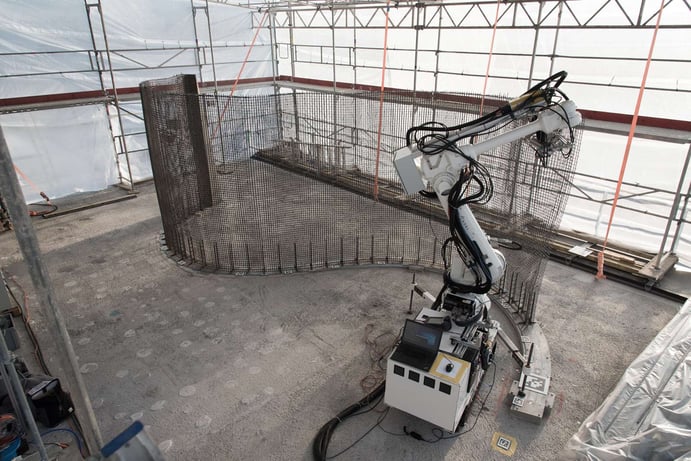 3D printing: from miniature to the original

3D printers have already become a fixture in many planning offices. They simplify the production of models and create miniatures of giant structures in just a few hours. But recent research is focused on a much larger dimension: 3D printing entire buildings in their full size. Thanks to innovative technologies, a wide variety of materials can be used: plastic, metal, glass and concrete. The Institut für Holztechnologie [Institute for Wood Technology] in Dresden is even researching a wood filament.

There are currently two types of large printers: Most models work in an enclosed fixed structure. If the final building is larger than this space, the device prints individual modules, which are later assembled on the building site. New versions are similar to a very flexible robotic arm on which various nozzles can be attached for application or spraying. Since it has a greater range, entire unfinished structure homes are created on site using the 3D printer – and this is done in one piece.

See from the customer's point of view how Allplan Architecture was used in different challenging customer projects and contributed tremendously to their success. Have a look at more than 14 exclusive projects with challenges and suitable approaches to the right solution.

An innovative and advantageous production process

3D-printing architecture can be implemented within a short period of time. It allows for more flexible and unusual forms than conventional construction methods. In addition, it is much more cost-effective and sustainable: Only as many building materials are used as are necessary. The Chinese company WinSu even uses recycled building materials for its printed buildings.

Planning with the help of architecture software has largely contributed to the 3D printing of houses being developed so quickly. Universities and companies around the world are researching innovative procedures.

An unfinished structure from a single piece

Additive production with 3D printing has long been known about. But the circular building that Apis Cor constructed near Moscow was created in one go. The building has a living space of about 38 square meters. The costs for concrete, insulation, windows, doors, flooring and the exterior plaster add up to just EUR 9,500. The 360° rotatable 3D printer was centrally located on a floor slab and injected hollow walls with a special concrete. Then it filled the walls with an insulating material. The finishing then took place by hand, which means craftsmen installed windows and doors and applied the plaster to the exterior wall.

Living space is not just required on earth. The European Space Agency (ESA) is working on a project for 3D-printing with moon sand. Mobile robots would first collect the sand on the moon, build it up in layers and spray it with a special binding agent. This would create houses with a rock-like structure. The scientists from MIT take it a step further. They also want to use a mobile 3D printer to construct buildings on Mars in the future. The operation would occur via solar modules. The device can adjust the printing of the building plan to the local conditions in real-time by measuring moisture and temperature on site.

Houses in 3D printing – The architecture of the future

3D-printed buildings could be constructed as quick and cheap protective structures in crisis areas or after natural disasters. The lack of living space in the major cities of the world could also be managed this way – at least that's the vision of scientists and entrepreneurs. Additional research is required to be able to not only print the unfinished structure, but also other components of a house. Only then will entire houses be created from the 3D printer. You can find more exciting examples of additive production in our article "The Trend of the Future: Houses from the Printer".